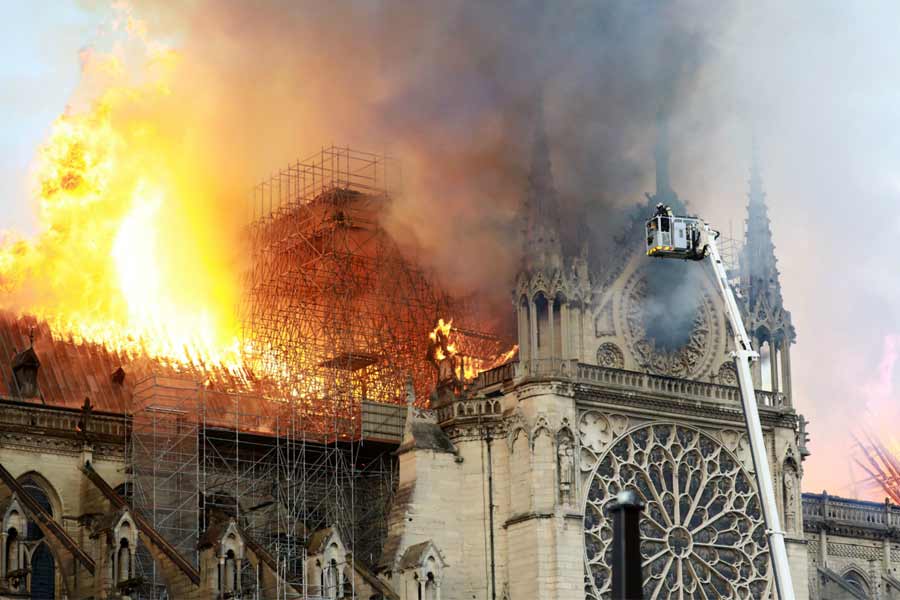 Many of you might not believe how badly fire broke around in France’s Notre-Dame church on 15th April 2019. However, 400 of the fire-fighters have put their best foot forward to save the cathedral from catching fire for long nine hours, before it was finally declared that the fire had been extinguished. Luckily, no one has got injured or hurt from this fire incident.

According to the New York Times, it will take some more days to properly assess the damage and to take a note that what has been destroyed and what has survived the fire during the fire breakout. But it might sound surprising to you that what was so special about this French Cathedral.

Keep scrolling to find out its importance among so many peoples.

1. ‘Crown of Thorns’ which was worn by Jesus during his crucifixion

A tiny piece of the Crown of Thorns that was worn over by Jesus Christ during his crucifixion is kept at the treasury at Notre-Dame. It is believed that the crown was bought by King Louis IX in 1239.

2. Notre-Dame is home to many stunning rose windows

Undoubtedly, Notre-Dame cathedral is home to three beautiful and stunning stained-glass rose windows whose stained-glass panes are in the shape of flower petals.

3. Relics of both the patron saints of Paris were located inside the spire

The relics of both the patron saints, Saint-Denis and Saint Genevieve are located inside the top of the spire. They were placed by Archbishop Verdier in 1935 in order to protect the cathedral and its congregation from ill fortune.

The entire interior of the cathedral building is been nicely covered with some of the marvellous and priceless paintings.

5. The cathedral is home to 10 bronze bells bell that weighs nearly 4 tons

Notre-Dame is home to 10 bronze bells that weigh up to 4 tons each. It is believed that it has the oldest bell inside the church named as Emmanuel that has been present in the cathedral since 1861.

6. The roof on Notre-Dame contained a “forest”

The roof of the Notre-Dame resembles a forest from the very beginning. Its timber frame has involved around 52 acres of trees that were cut down in the 12th century to create the roof. That is why it is known as “forest”.

Notre-Dame is also home to the largest organ in France with five keyboards and 8,000 pipes. The great organ dates back to middle ages.

The archaeological crypt which is located inside the courtyard of the cathedral was created in order to protect 19th-century relics that were discovered during excavations in 1965.

France’s cathedral also has a statue of Saint Anthony of Padua in its chapel which was brought to Notre-Dame in the year 2013 by the sisters of the Bethlehem Monastery.

The cathedral, Notre-Dame is located on the island namely, Île-de-la-Cité in the River Seine. This was once the centre of Paris’ predecessor, known as Lutetia. It is believed that the cathedral may have been built directly on top of the site of a temple dedicated to Jupiter