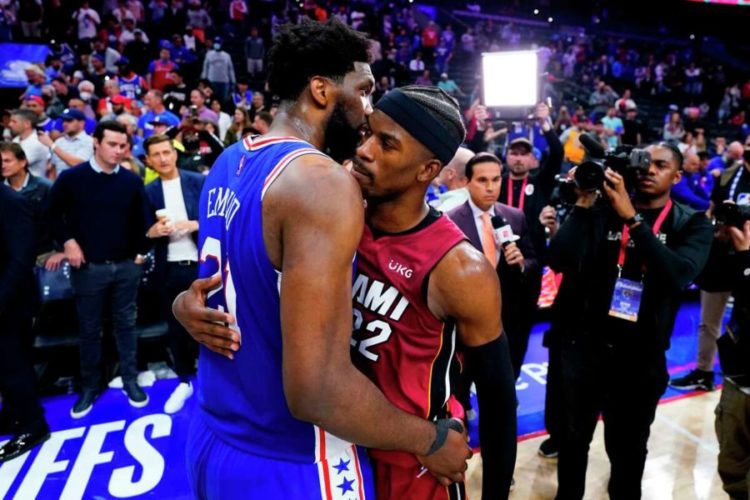 If you are a professional sportsperson, then you have to keep your emotions at bay. This is because you might have to play against your former team and former teammates at some point in your career. In football, we have seen Cristiano Ronaldo playing and even scoring for Real Madrid against his former club, Manchester United. Such examples are plenty in sports. In the NBA, the latest instance is that of Jimmy Butler.

Jimmy Butler featured in 67 games for the Philadelphia 76ers in the 2018-19 season. That season, the 76ers were defeated in the Eastern Conference semifinals by the Toronto Raptors in seven games. However, Butler didn’t stay at the 76ers after that season. He wanted the 76ers to commit to him on a long-term basis. But the team declined Butler’s request and traded him to the Miami Heats. Butler seems to have remembered everything, as he bounced the 76ers out of the court on Thursday night at Philadelphia.

Read the article to know more about it.

Jimmy Butler Hits Back at The 76ers

The 76ers signed Tobias Harris from the Los Angeles Clippers in February 2019. On 10th July of the same year, they gave Harris a $180 million contract to keep him at Philadelphia for the next five years. However, just four days before that, they traded Jimmy Butler to the Miami Heat. Harris had been a solid player for the 76ers since his arrival.

He’s averaged 18.7 points and 6.9 rebounds. But in the postseason his scoring average dipped to 17.5. In the series against the Heat, he averaged 16.0 points and 5.7 rebounds. But Jimmy Butler has been in Stellar form for the Heat since his joining, averaging 20.9 points, 6.5 rebounds, and 6.2 assists.

His postseason has been even better with an average of 23.2 points per game. Moreover, in the series against the 76ers, he has emerged as the best player averaging 27.5 points on 51.3% shooting with 7.5 rebounds, 5.5 assists, and 1.7 steals per game. This is more than impressive.

Also read: Stephen A. Smith Hits Out At The Sixers for Getting Scorched By Miami Heat

A Message For The 76ers

Jimmy Butler was unhappy with the way the 76ers treated him. He wanted to stay but not on a short term deal. This was a just demand on his part, given his performance. But the 76ers chose Harries over him and thereby traded Butler to the Miami Heat. This trade has been a beneficial one for the Heat.

This is because, Since his arrival, Butler has intensified the heat of the Miami Heat. He has scorched many teams with his dazzling performance. The latest team to be scorched is the 76ers.

Jimmy Butler seems to remember the denial of the 76ers. It seemed that in the series he had a point to prove and a message for his former club. This was more evident after the match. As Butler was walking out of the court, he seemed furious. Click the link below to see what he actually said:

Jimmy Butler has proved whatever he had to prove in the series against the 76ers. He has shown his former team that trading him was their mistake. Harris is indeed a good player. But Butler has proved that he is far better than him. However, the way in which Butler left the arena after the match, seems to suggest that his fury is not yet over. There is perhaps more to come for the 76ers.

Butler has proved his point. Now it remains to see if Harris gets motivated to prove Butler wrong. Thus the next clash between the Philadelphia 76ers and the Miami Heat will be a much-anticipated one.