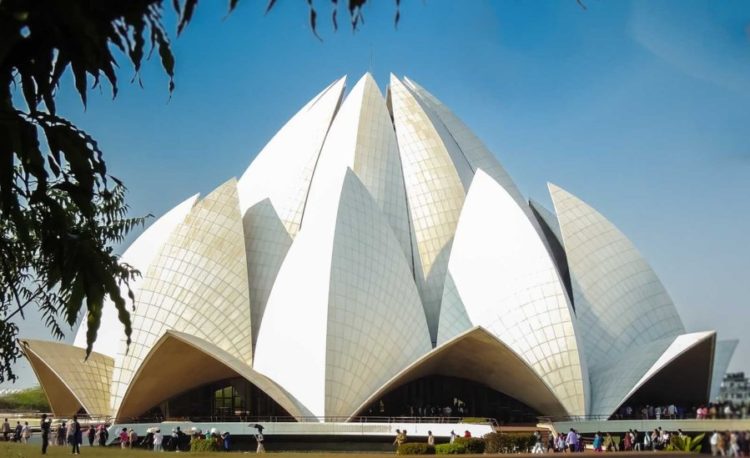 The Mashriq al-adhkār, or what the world knows as Lotus temple, is an iconic symbol of contemporary Indian architecture. The structure was the culmination of Fariborz Sahba’s imagination. Moreover, it incorporates the aesthetics of the Bahá’í House of Worship which gives it a Baroque-esque look. The temple serves as a place of worship. However, it has also gained the attraction of tourists throughout the year.

So, Where is the lotus temple situated? It is in Delhi. Because of the glitzy graciousness and grandiosity, the architectural piece has gotten the title of 20th century Taj Mahal. In Due Time, The Structure Has Gotten Many Citations And Honors. So, That Is Why We Have Jotted Down 8 Things You Didn’t Know About Lotus Temple To Quench The Thirst Of Your Curiosity….

The structure showcases unity and harmony. The Bahá’í religion, which Baha’u’llah founded in the 19th century, is one of the sought-after religions. It is one of the religions that are high on spirituality.

Hence, the Lotus Temple is open to all despite their religious belief. It does not divide followers into the sect of casts and sex. Like any Bahá’í house, it has nine-sided construction.

2. Passion Went into The Construction

The chief architect, Fariborz Sahba, traveled to India to study architectural history before he could start designing. The construction took place in stages. The making of the design finally came to an end in 1986.

The form of lotus represents purity and tenderness. Moreover, it has 27 petals arranged in clusters. The central hall can seat up to 2,500 people. The lotus temple inside looks just as spacious as the outside. Natural lighting and ventilation optimize the design.

3. About the Lotus Temple Ornamentation

The two fundamental elements used for ornamentation of the structure are water and light. Unlike other structures, they focused on incorporating simplistic and natural resources. The temple has native vegetation growing all around it. Moreover, the pool near it depicts the illusion of a lotus floating in a pond.

The chief architect used concrete shells and marvel panels as cladding. They obtained the marble from Penteli mountain in Greece. Lotus Temple is the same place where the materials for monuments and other Bahá’í Houses of Worship were taken. Moreover, they used more than 10,000 different sizes of marvel to complete the construction. As it had a complicated design, it took more materials.

You may also like: 6 Interesting Facts About Jedi Temples You Should know

Who said modern construction cannot be eco-friendly? It is exactly what the lotus temple is. It is the first temple in Delhi that used solar panels. 120 kw of energy comes from solar panels. Normally, the temple needs 500 kw energy. So, solar supplies a huge chunk of energy to power the place.

6. Each Cluster of Petal Symbols Something

As we mentioned earlier, the external structure of the lotus temple has 27 petals. It is put together in a cluster of three. The first cluster is where the worship takes place. The second is a place where it acts as a roof for ancillary space. Meanwhile, the cluster of petals tries to canopy the nine entryways. The petals generally spring from one podium to elevate it.

Lotus Temple is very famous and has become a tourist hub. Almost four million people visit the temple every year. The average number of people visiting the temple goes as high as 10,000 heads. One of the rules upon which tourists enter is that no one can take pictures of the Scripture.

However, the lotus is not the essential part of the Bahai scripture and not everyone knows it. This place is one of the seven such houses of worship. Others are in Sydney, Panama, Western Samoa, Uganda, Germany, and Wilmette.

8. The Maker Has Many Accolades Under His Belt

As we already mentioned, Fariborz Sahba designed the temple in the shape of the lotus as it corresponds to several religions. He has won multiple international awards for his work of brilliance.

Institutions like GlobArt Academy, Institution of Structural Engineers, and many more have bestowed him with awards. Those awards prove his talent. Hence, his work has gotten recognition in many publications as well.

Starting from Encyclopedia Britannica to Guinness World Records. Also, there are stamps of the temple, books, and even compositions of music on the temple. It emphasizes the beauty of the place. Moreover, it seeks to create a sense of harmony through globalization.

Lotus temple has become one of the contemporary phenomena in the architectural world. Moreover, the aesthetics have rendered it to be a worthy sightseeing place. So next time when you are in Delhi, make sure to visit it once.

You may also like: Have A Look At 10 Most Iconic Buildings Around The World