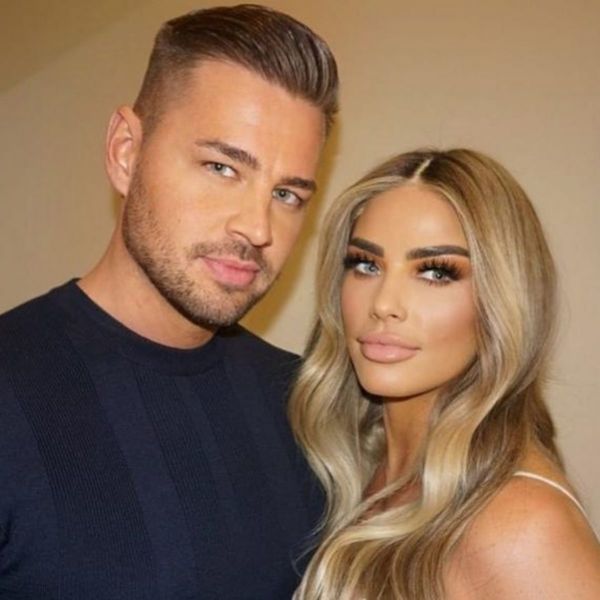 If you are an avid user of social media platforms, you must have seen the former glamour model Katie Price and her fiance, Carl Woods, jet away in a bright pink hoodie and wheeling a leopard-print suitcase. So you must be wondering what the matter is. In the picture, you could see that Katie Price had covered her face with a baseball cap and a visor.

So if you have been following these celebrities’ activities, you will know that Katie was on a suspended sentence. In fact, the law had also swerved her to jail for breaching a restraining order with an obscene text rant. However, she had already booked a sunshine break before her appearance in court.

Would you like to know more about the celebrity couple? Stay with us until the end, as we will share some of their lives’ interesting aspects. Let us have a look!

Katie Price: Some Significant Aspects About The Celebrity Couple

As you know, Carl Woods is a famous British reality TV star, car dealer, Instagram personality, celebrity partner, and entrepreneur from England. He was born on 15th February 1989. Therefore, he is currently 32 years old. We know him popularly as the partner of the former model Katie Price.

Since Carl Woods is a car lover, he owns more than 30 luxury cars. At the same time, he has also worked at Ace Cafe London. Apart from this, Carl also appeared in the year 2016. However, the celebrity prefers avoiding the spotlight; therefore, we do not have much info regarding his family members.

On the other hand, Katie Price is a media personality and a model. She initially gained recognition in 1996 for her glamour modeling work with frequent appearances on Page 3 in the British tabloid The Sun. In fact, they also gave her the pseudonym Jordan for her amazing personality and attractive looks.

As per the sources, Price appeared in the third series of “I’m a Celebrity…Get Me Out of Here!” in 2004. Moreover, she was also the runner-up in the search for the UK entry for the Eurovision Song Contest. In 2006, she released her debut studio album “A Whole New World” in collaboration with Peter Andre. She was a part of several other hit shows as well. Price was the winner of the fifteenth series of Celebrity Big Brother in 2015. She also released six autobiographical books, eleven novels, and two series of children’s books. In fact, her “Angel” series ranked at the top of The Sunday bestseller list.

What Is The Controversy Surrounding The Celebrity Couple?

So as we said earlier, both Katie and Carl were off on vacation. We could last catch a glimpse of them at the airport. Katie was looking well organized, with a host of designer luggage neatly stacked on the trolley. On the other hand, Carl was wearing an orange tracksuit. He took charge of wheeling their luggage around the departure area. They were waiting outside the Business Class check-in.

The pair looked quite at ease and relaxed while waiting in the crowds. The reporters captured Carl having a chat with Katie. So what is the actual controversy centering on them? Let us have a look! As we mentioned, the OnlyFans model admitted breaching a court order by harassing her ex-husband’s fiancee.

However, despite six driving bans, a drink, and a drug-fulled crash, she dodged a jail sentence again. Needless to say, the court banned in 2019 from contacting ex Kieran Hayler’s fiancee Michelle Penticost after she ranted at her at the school gates. Bust Katie just did not bother to abide by the restriction; she still sent him a vile message. This was after seeing a message on Michelle’s private Insta page that she thought to be a dig at her.

Some More Shocking Details About The Controversy

Needless to say, some people deliberately invite trouble into their lives, and Katie Price is one of them. Despite having a restraining order, she is causing a ruckus, which is breaching the order. Just like she did in Michelle’s case. This led Michelle and her partner Kieran to file a complaint against Katie Price.

So as per the consequences, the police took Katie in the early hours of the next day, and she had to spend 12 hours in a cell. This incident happened a month after the court gave her a 16-week suspended sentence. It was because of her flipping over her BMW X5 in Patridge Green, West Sussex, while she was banned from driving. According to the sources, she was driving the car after drinking and taking drugs.

However, all of these do not seem to tense Katie Price at all. We saw her showing off her new designer bag while she was at the court despite being bankrupt. In fact, she also made attempts to prove that her business was back on track. Katie also made sure to plug in her OnlyFans page as she broke her silence before heading away. Therefore, when the reporters captured the couple at the airport leaving for their vacation, their fans were indeed surprised.

Apart from the above charges, there was also an assault charge against her in a nightclub. However, the victim dropped the charges after the police failed to arrest her within 12 weeks. Moreover, Price claimed that a famous celebrity had previously raped her; however, she did not report the incident.

Price also said that she would never reveal the name of the attacker. In 2019, the police fined her after shouting abuse at Michelle Penticost, the partner of her ex-husband Kieran Hayler. As we mentioned earlier, the court issued Katie a restraining order against her. So it banned her from making any contact with the woman. Moreover, Price also had to pay 606 pounds as fines and court costs. However, Price pleaded guilty

at Lewes Crown Court to breaching the restraining order against the same woman after sending an abusive message to Hayler about Penticost in 2022. So you can well understand that Katie Price is indeed the least bothered about these legal issues in her life. She is currently in the vacation mood with her fiance Carl Woods.

So as we conclude, we can say that both Katie Price and Carl Woods are some of the well-known celebrities in the showbiz world. Therefore, when their names come up in a controversy, the hype will be even more. However, Katie’s name is not new in legal controversies. Previously she has already been accused of several cases which are still lurking. Therefore, at this time, when Carl Woods and his partner Katie Price are off on vacation,  the paparazzi will seize the opportunity to capture their every move.

Also Read: Who is Steven R. McQueen & Why He Broke Up with Dylan Penn?