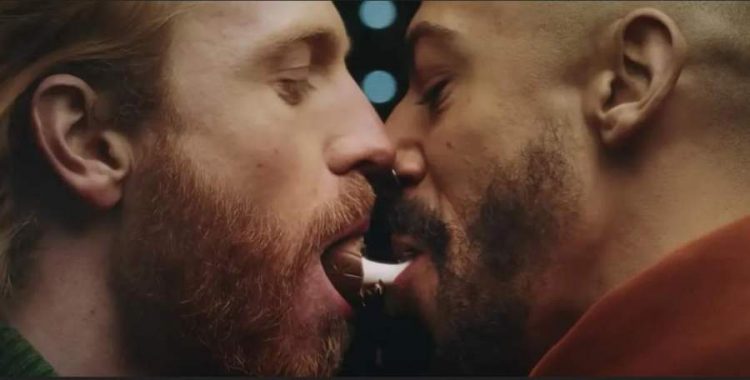 A controversial TV ad by Cadbury in the UK has sparked the public to sign an angry petition against Gay Kiss. It happened because the ad showed two gay men almost kissing each other. The popular chocolate company released the ad last month to celebrate the event of 50 years of its famous Creme Egg. The ad featured different kinds of people eating chocolate egg in their own way. Some are dipping it, licking it and even baking it. However, the final scene in the commercial shocked many people.

Two men are holding their hands and one man is having the chocolate egg in his mouth. The other man comes closer and takes the bite of the egg and the chocolaty contents of the egg ooze out of their mouths. They shared a very intimate moment in the ad. Later the two men got identified as a real-life gay couple named Callum Sterling and Dale K Moran. Their scene in the commercial was for two seconds. Many people after watching the scene signed a petition to protest against that intimate scene in the commercial. More than 25,000 people signed the angry petition against it.

The petition charged the commercial for being a “highly-charged sexually provocative act” and it accused the company Cadbury of “selling sex to children”. The petition said that Cadbury is a well-known company who market their products to families and children. A lot of their commercials focused on making the families and children buy the treat on happy occasions. However, the recent ad of the company is highly unacceptable as they seek to expose children to an image that is much sexualised.

The petition also continued by saying that as children are often known to copy what they see on the screen the advert has shown a form of grooming that has exposed them to inappropriate and graphic sexual content. They abused the company of featuring a gay couple in its ad to escape the criticism by using the disguise of ‘inclusiveness’ and ‘diversity’. However, this sexually graphic advertisement is not proper for mainstream media where many children can watch it. Many users on Twitter questioned Cadbury about it.

The company answered that the campaign was designed to be inclusive. They said that they have always been a company that strives to be progressive whether it is their products or campaigns.  Therefore, through the almost kiss of the couple in the ad, the company wanted to show that their Creme Egg is as fun and light-hearted as the kiss. They wanted to show that all kisses are the same so they have added the scene of gay men kissing to promote inclusiveness.

The company is continuing to receive a lot of backlashes on Twitter for that ad. However many are supporting the company and are calling the people who are against it narrow-minded. Many people in the LGBTQ community are grateful for the company for the inclusiveness.

The gay kiss in the chocolate commercial has met with different receptions. Many people have different views about it.

How To Download PUBG Mobile on iOS, Android and PC After Ban