Coconut Crab: The Intriguing Creature That Rules The Indo-pacific Ocean with Monstrous Claws 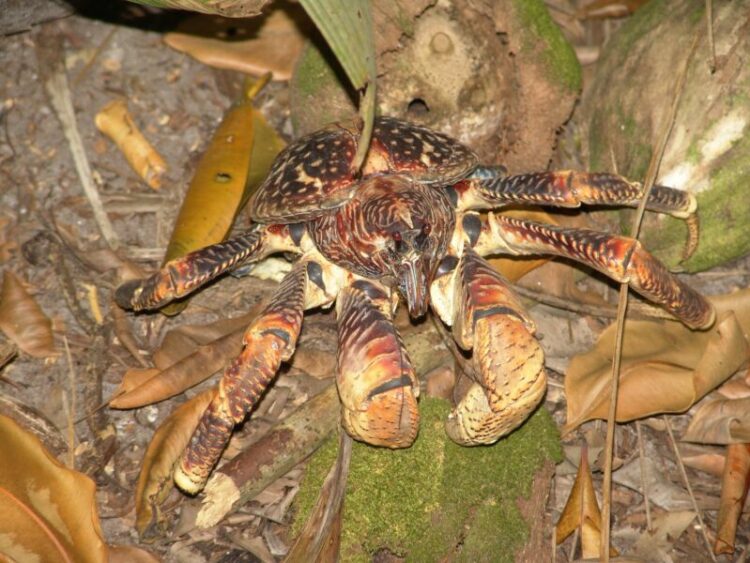 Coconut crab reigns in the Indian Pacific Ocean as the humungous arthropod. Charles Darwin sees one of these creatures in his journey, which he later describes as monstrous. This creature stuns everyone who sees it in real. There are many amusing things about coconut crab, but nothing can surpass its size. Since Darwin’s days, there have been many intriguing stories about this coconut crab. It is a three feet long creature that carries six times more weight than its own.

Legends say that these crabs can even tear human limbs part. The legs of this crab are packed with huge power that can break coconut too. Let us see more extraordinary facts about coconut crabs.

The coconut or robber crab is one of the amazing Indo-Pacific Ocean creatures. The crab has the most powerful hands. Experts say that bite from this coconut crab is as powerful as a lion’s bite. However, coconut crabs do not use their claws often but only when they sense danger. It is clear from the name that its favorite food is coconut.

Due to this, these crabs live their life on islands. These crabs can easily find their food in these locations. With only its claw, this coconut crab can break open a coconut. They are capable of tearing open coconut and other food items too.

Coconut crabs eat different birds and kittens. These are creatures that eat plants, animals, and humans too. However, they do not prey on humans, but they can eat human remains. Experts say that they can tear animals bigger than they are. It is also a fact that they do not hesitate to eat other coconut crabs.

Coconut crabs eat anything they want. They even eat shells and exoskeletons. Not only do they eat the shells of other animals but their old shells too. Also, these arthropods can easily climb trees to find food. Their exceptional talent is also knocking down fruits and coconut from the tree.

Another reason they climb on the tree is to hunt down birds. Plus, these crabs climb on a tree and wait for many hours to hunt birds. The only thing they use for their hunting is claws. With their mighty claw, they can take down any prey. Crabs also take their prey to burrows to eat them for days.

Also read: What Do You Think About Circular Runway, a Futuristic Idea or A Flop Show

In 2017 Mark Laidre a scientist, went to the island to explore. He witnesses coconut crabs and their unusual hunting strategy. He spreads the word about this amazing creature. Birds on the island stay at the top of the tree to avoid these crabs. However, escaping from giant claws is almost impossible for the birds. The scientist, in the middle of the night, sees a coconut grab. It is a convenient time for these crabs to hunt.

Also, it is a time most of the birds rest on the tree branches. He sees a coconut crab sneaking into a tree to catch a red booby. This bird was resting on a low branch that gave a chance to the crab to snatch it by its wings. After the attack of the coconut crab, the booby falls. Now the crab begins to torture its prey.

First, the monster crab breaks its wings. Further, more coconut crabs come out of its burrow to take home their food. These robber crabs live in groups too. The creature enjoys its prey not in the open but inside its burrows. This unusual hunting of coconut crabs did not miss the eye of a scientist who shared his experience with the world.

The mystery behind Amelia Earhart and her connection with coconut crab

Coconut crabs do not harm people or hunt them. However, they eat any carcasses of humans too. These crabs are good at striking when they sense any danger. Several cases of humans getting severely injured after putting their hands in its burrows. In 1937 experts found skeletal remains. Amelia Earhart is the pilot who suddenly went missing. Years later, investigators find out about the plane crash, and they assume that her remains landed on an island.

After examination, they think that is Amelia’s carcass. What they found in the autopsy is shocking. Her body was torn apart by some creature. Her bones and limbs also seem to be torn. Experts believe that the Pacific Ocean is home to coconut crabs. They suspect that after Amelia’s body was flushed over the seashore the Monstrous crabs would have used their claws to prey on the corpse. It is not clear proof but a story many experts believe. The real reason behind the pilot’s death is still unknown.

There are many theories about Amelia Earhart’s death. Experts say that her body was lying on the abandoned pacific beach after the crash. Her blood would have made the crabs prey on her body. The scientist did a test by putting a pig’s corpse on the beach. Like their assumption, the coconut crabs came and shred apart the pig’s body. If this theory is true Amelia may be the only human eaten by coconut crabs.

The coconut crabs most meaty and fleshy crabs

Coconut crabs are crabs. People want to know if they can eat this crab-like any other crab dish. Coconut crab delicacies are served on many islands. They are healthy and edible. For many centuries people on islands have survived by relishing these crabs.

Explorers and Charles Darwin himself have had a bite of these crabs. Cooking them with a lot of fire is a traditional way to cook them on islands. Islanders also use coconut shells to break the tough shell of these crabs. It is one of the meatiest crabs you will ever eat. Plus, people describe its taste as buttery, fleshy and sweet. Also, the meatiest part of the crab is the abdomen.

However, hunting coconut crabs are endangering the species. Torturing these crabs and reducing their population is not a good idea. Further, robber crabs eat toxic plants, which can poison humans too. The best way to enjoy these coconut crabs is by exploring them on the island.

Also read: The Blobfish: A Guide to The World’s Ugliest Animal