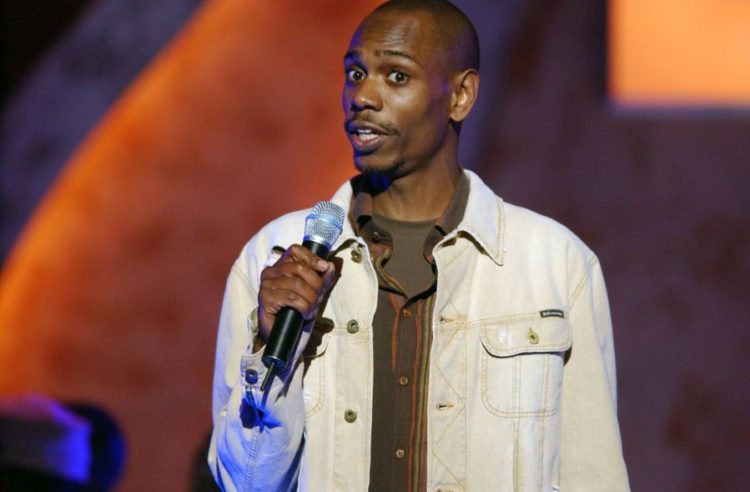 The world lauds Dave Chappelle today when he walks on stage. We all know what an amazing and awe-inspiring comedian he is. In addition, he is probably the most famous and most expensive comedian today. Besides, he is a true inspiration to the young comedians today, who wish to make a profession out of it. But has it always been like this from the beginning? No. It wasn’t. He had to step on all his failures and embrace the humiliation. And that is what helped him learn more and look what he is today!

We all know that the life of a comedian isn’t easy. Firstly, at the very beginning of their career, they are demotivated. Because this is not seen as a stable profession. Secondly, many people think this isn’t a ‘classy’ profession. And lastly, young artists face a lot of backlash and embarrassment before they achieve success.

If this is the scenario even today, imagine what Chappelle must have faced during his time? But it didn’t break him. Instead,  it made him stronger. If you want to know more about this legend, keep following this article.

Life and career of Chappelle

Fifthly, we know that he studied at Duke Ellington School of Arts where he studied theatre arts. Sixthly, he completed his graduation in 1991.

Moving Towards His Goal

Today we know that Dave Chappelle is one of the most famous comedians. Besides, his net worth is estimated to be $60 million. We know that Chappelle has won the hearts of the audience at a very young age. Firstly, the people read that Chappelle used to work on television, both on and off the screen. Secondly, after high school, we hear that Chappelle came to New York from his hometown which is Silver Spring MD. He came here so that he could fulfil his dreams. We get this piece of information from Celebrity Net Worth. Thirdly, this is where his life’s struggles began.

Dave Chappelle has told a very interesting anecdote to the media about his struggling days. When he was in New York, he went to perform in the Big Apple. Besides, it was a very renowned Apollo Theatre. However, the show was a complete disaster and the audience was booing him. Although Chappelle was very embarrassed, he tried to maintain a clear head.

Later we hear that he told the media that “some best things” happened to him on that night. “That night was so liberating because I failed so far beyond my wildest nightmares of failing. That it was like hey, they’re all booing, my friends are here watching, my mom, this is not that bad, and after this I was fearless.”

Stones on His Way

Firstly, we hear that although he faced some hardships there he signed his first television show at 18 years of age.

(according to CBS News). However, his struggles did not end here. He had developed 11 pilots but only one would go to the tv screen. In fact, ABCs Buddies was also cancelled by the channel after only 13 episodes.

Secondly, Dave Chappelle worked to make another show with Fox. Its name was Dave Chappelle. But he had many issues with Fox and did not continue the show. Here also we see that he did not face success. But what was the reason? Let’s read what he said to CBS news. ” I flew out there for the meeting. And if you can imagine I was the only black person in the room. They basically told me that we’ll pick up the show but we want more white characters on it. For no other reason than they thought it would give the show a more universal appeal. And so I quit.”

Light at The End of The Tunnel

Although he had faced many challenges earlier Dave Chappelle got his success. In 1998, he starred in a cult classic Half Baked. In this film, we also find actors like Harland Williams and Jim Breuer. Furthermore, we hear that he wrote a portion of the movie script himself. We see that he has played two characters in the film. They were Sir Smoke-a-lot and Thurgood Jenkins.

Next, we see that Chappelle got an HBO special in the year 2000. Its name was Dave Chappelle: killin them softly. Furthermore, this was his solo standup comedy special show. We know that for this he got a lot of attention from the people. Next, we see that he came back with another show in 2004. Its name was Dave Chappelle: For what it’s worth. Furthermore, he was nominated for two Emmy awards for this show.

The people had seen Chappelle’s amazing acting skills in Half baked. But they wanted more from him. So in 2003, he created a sketch show called Chappelle’s show. According to CBS News, he earned around $50 million from the show during his contract of two years.

This comedy series was in fact nominated by the academy for Emmy awards. However, suddenly he decided to leave the show and his $ 50 million dollar contract. Later we hear that he didn’t want to be there in the third season.

Away From The Spotlight

After this Dave Chappelle kept away from the lights for quite some time. Jason Steinberg told the New York Times in 2005 that Chappelle was in a conflict. ” He seems like he’s trying to figure out what he wants to do and put it out there the way he wants to.”

The people saw Chappelle back in 2013. In 2015, we saw that he hosted “Saturday Night Live”. For this, he got his first Primetime Emmy Award for Outstanding Guest Actor in a comedy series.

Furthermore, we see that Netflix paid Dave Chappelle $60 million in 2016. It was for three stand up shows that he would host for the platform, which was shown in 2017. We hear that Lisa Nishimura, Netflix’s vice president of Documentary and comedies told things about the comedian to The Hollywood Reporter. ” Dave’s three new specials promise to be some of the most anticipated events in comedy.”

She also said that the full team is glad that he chose to work with Netflix. In addition, we hear that the people watched the first of the three seasons the most. And out of all other shows, this became the one that people watched most.

Furthermore, we have seen that Chappelle had won the best comedy album in the Grammys for three years back to back. In 2019, he got the Mark Twain Prize for American Humour from the Academy.

Dave Chappelle has shown us that nothing is impossible if you work hard for it. His life and rise to fame have shown the people that after every night, we will surely see the rising sun.

Also Read: Who is Jackie Sandler? Everything About Adam Sandler’s Wife