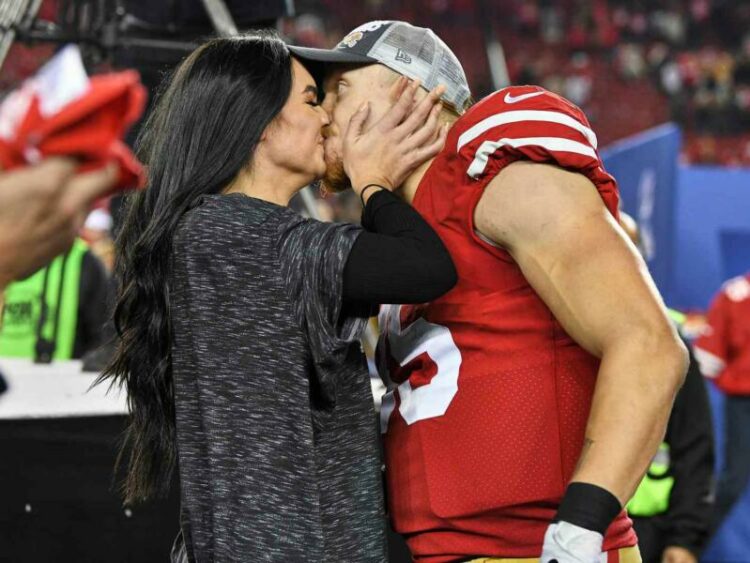 Claire Kittle is the wife of American Football player George Kittle. George Kittle will be one of the most exciting players to watch during Sunday’s playoff game between the San Francisco 49ers and the Philadelphia Eagles.

As you know, the tight end, 29, has been one of the most exciting players during the playoff season. By his side throughout his career, he’s had his now-wife Claire cheering him on! Undoubtedly she’ll be rooting for him during the playoff game on Sunday, January 29. To find out everything, you need to know about George and Claire’s relationship here.

Claire Kittle was born in 1994 in the small town of Dubuque, Iowa. She took a keen interest in sports from a young age, and her talents got her into the basketball and track teams of Wahlert High School. Moreover, she was a tremendous track prospect, earning the all-state selection distinction twice during her stint at Wahlert High School. Being a track star didn’t stop her from contributing to the basketball court. As she also played a major role in leading the team to a state championship.

Claire was a college basketball player

Claire was also an athlete when she and George met. So it should come as no surprise they have a fair amount in common! She played for the University of Iowa women’s basketball team. She wrote in her personal blog that student-athletes occupied mostly the dorm they lived in. After graduating, she continued her passion for physical fitness. So she owns her own fitness business and has worked as a personal trainer and health and wellness specialist, according to her LinkedIn.

When did Claire and George kittle get married

Claire and George have been married since April 2019. More specifically, the Kittle couple wed in a private ceremony attended only by their closest family and friends. George’s father, Bruce, performed the ceremony. Since “that’s the sacred element of it all,” Claire and her husband chose a short ceremony, according to her blog at letteysetgo.com.

She has a blog

Claire runs an amazing blog called Lettery Set Go. It has a name based on a nickname that George gave her, based on her middle name Colette. Her blog details her travels and life experiences and also contains shopping tips for brides, everyday fashion, and of course, 49ers fans! “I want to show and share with you all of my tips & tricks, the shouldn’t and wouldn’t, the definitely and maybe’s, and all of the ins and outs I’ve learned,” she wrote on the website’s About page. “You’ll find travel inspo, where to go when to go, and how to do it right. Fashion and beauty creativity. As well as anything and everything I am currently experiencing in my life. I’ll share it all. I’m an open book.”

Claire regularly cheers on her husband

As the 49ers try to make it to the Super Bowl, Claire will undoubtedly be there to root for George. As a team, they try to bring home a ring! She regularly posts photos of herself on the sidelines. Also, she shares shots of her hubby and some pictures of the two of them with some PDA. So When the team won on January 8, she shared a compilation video of herself and loved ones going to the game and captioned that the 49ers had a lot of luck. “Lucky brought 2 touchdowns.