How To Play Beer Pong: A Complete Guide! 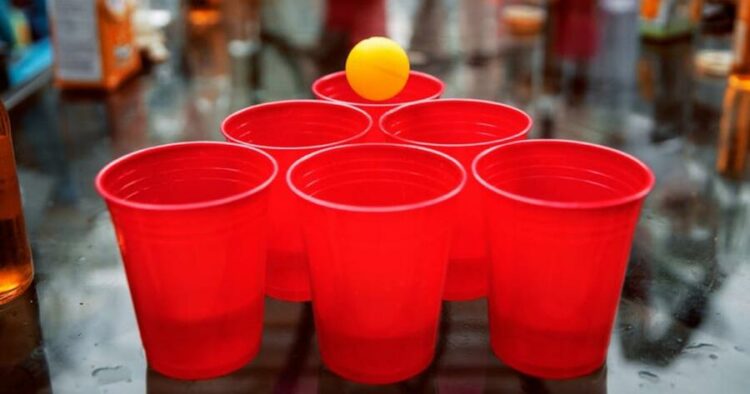 A well-liked drinking game called Beer Pong, commonly referred to as Beirut, is played all around the world. Two opposing teams compete by trying to get their ping pong ball to land in a beer cup on the other side of the table by throwing it across the table.

In a variety of settings, including bars, colleges, institutions, and house parties, beer pong is very popular. The Ivy League Dartmouth College in Hanover, New Hampshire, where it was first played, is where it is said to have evolved. Here, the game originally required bats and a net and resembled table tennis, but over time, it has become simpler and no longer requires the use of bats or paddles.

Although there is a World Series of Beer Pong, the game of Beer Pong is not governed by any official body or organization because it is a fun and informal drinking game.

It continues to be a widely-liked game that needs a surprising amount of skill as well as a little bit of luck. But, since it usually involves drinking, only players who are of legal drinking age where the game is played should participate.

Aim of The Game

Beer Pong’s goal is for one side to eliminate all of its competitors’ cups to win the match. The fact that this game almost usually involves alcohol and college students leads many people to believe that the other goal of the game is to get drunk.

It is not uncommon for some players to purposefully be horrible at the game to ensure that they acquire more alcohol because the better you are at the game, the less you end up drinking.

Beer Pong can be played one-on-one or between two teams of four players, with two players on each team. A suitable table, some cups, and a ping pong ball are all that are needed for playing Beer Pong in terms of equipment.

The most typical method is to utilize disposable plastic cups, and each team then arranges their cups (often numbered 10 or 15) in an equilateral triangle on their side of the table, all of which have been filled with the same amount of beer. The ball can be rinsed between tosses in a different cup as well.

A points score in Beer Pong is not maintained in the same manner as in sports like hockey or soccer. A scoring system does exist, though. Because each team starts with 10 or 15 cups, it is possible to tell which team is in the lead as they attempt to quickly bring the other team’s score to zero. The team with the most cups is always in the lead.

One team successfully eliminates every cup from their opponent to win the game. A draw can happen if both teams have one cup remaining and both eliminate the other team’s cup on their final turn.

If this happens, the normal procedure to choose a winner in overtime, where three cups are utilized and the first team to eliminate the opposition’s cups is declared the winner, with additional rounds of overtime being played if needed.

Above we mentioned the details of the game beer pong. Also, in this post, we have included the players and equipment required for the game and all the rules that will help you to understand the game. So, go through this article for a better understanding of this game.