Is Grizzly Man A True Story? Know About Amie Huguenard? 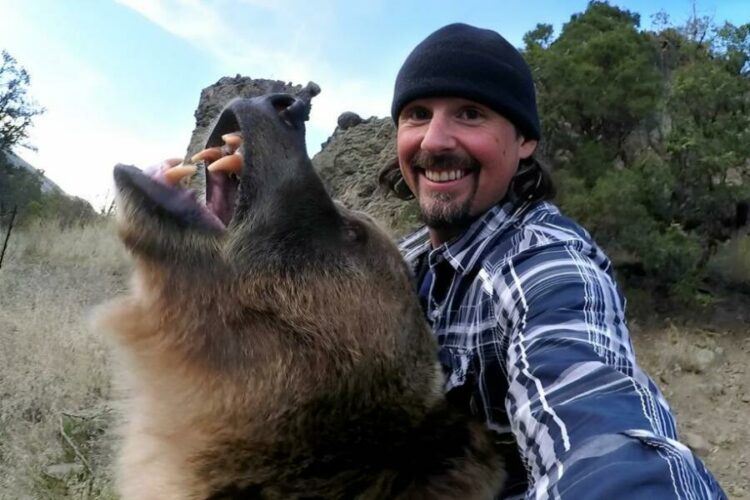 Before being killed by a brown bear, Amie Huguenard and her companion, Timothy Treadwell, had spent three years in Katmai National Park researching and documenting grizzly bears.

Thanks to Werner Herzog’s Grizzly Man, Timothy Treadwell—a man who has been alternately described as a reckless freak or a naive idealist—became a little celebrity in the summer of 2005. The documentary often featured background shots of Amie Huguenard, the companion Treadwell had on his final, tragic journey.

The work became one of Herzog’s most praised creations for its laser focus on Treadwell, an environmentalist with a troubled past who spent his summers among the bears of Alaska’s Katmai National Park. Nobody, least of all himself, was surprised by his impending death in their jaws.

Several accounts, however, claim that Amie Huguenard, Treadwell’s girlfriend, companion, and perhaps even an easy target, was also killed by the same bear that bit and devoured Treadwell.

Huguenard’s account has mostly gone unnoticed in the years since their demise was made public, yet it is a heartbreaking cautionary tale and a tale of hope dashed.

Buffalo, New York, is the place of Amie Huguenard’s birth. While employed as a doctor’s assistant in Colorado, she developed a fascination with science and medicine. Her passion for nature grew, and she began to spend a lot of her leisure time hiking and climbing.

In 1997, around this time, she read a book titled “Among Grizzlies,” in which the author asserted that he or she had found solace from drug addiction among the brown bears of Alaska. The book’s author was Timothy Treadwell.

The two soon started dating for about six years after Amie Huguenard got in touch with Treadwell. As soon as possible, she left for Alaska to join him in the grizzly-populated Katmai National Park for the summer.

During her annual journeys north with Treadwell, Huguenard proved to be a reliable travel partner. Her Katmai, with its 12,000 square kilometers of forest and roughly 2,000 brown bears, was an excellent fit for her hiking and survival abilities.

She accepted a position as a physician’s assistant at Cedars-Sinai Medical Center in Los Angeles in January 2003 and moved in with him in Malibu, California.

At Katmai National Park, Learning to Love The Grizzly Bears

Since the apex predators can weigh up to 1,000 pounds, Amie Huguenard was originally concerned. The captivating affection Treadwell had for bears, on the other hand, helped her overcome her concerns. He once told David Letterman they were just “party animals.”

The bears were largely quiet throughout their summer trips. Huguenard felt secure around them because they were usually sleeping and feeding him during the day.

Treadwell’s disputes with the National Park Service were also observed by Amie Huguenard. The park authorities were worried that Treadwell was putting himself and other people in danger by getting so near to the bears and that he was still using risky camping practices while on the prowl for poachers.

Before the summer of 2003, the pair had gone on two prior bear trips without any problem, but their third season with the bears would turn out to be tragically different.

Huguenard and Treadwell were making some serious errors that were getting worse. Even though Amie Huguenard and Timothy Treadwell had spent years living in Alaska and had learned a lot about the local wildlife, they believed that the grizzlies were starting to feel more like “their” creatures.

The summer of 2003 was coming to an end, and the couple was getting ready to go back to California. Treadwell and Amie Huguenard chose to remain in Katmai for an additional week after haggling over the cost of their tickets with a ticket agent.

Any bear species can become violent in the fall as they begin to replenish their fat reserves in preparation for hibernation, making it very risky to be around bears during this time. Huguenard described a bear battle on October 1 and said that “seeing them claw, bite, and growl at each other brought all of my fears spilling back.” The bears were fighting because food supplies were running low.

“There’s a vibe in the air that makes me slightly uneasy for some reason,” Huguenard wrote on Sunday, October 5, in her journal. Even Timothy has occasionally seemed a touch peculiar. Treadwell claimed that the bears were not a problem when speaking with a friend through a satellite phone.

The Couple Has Been Killed: The Tragedy

Everything changed that evening. A male adult bear entered their camp in search of food and attacked Treadwell. As they were pummelling Treadwell to death, a video camera caught his last words: “I’m being butchered out here,” he yelled. Before inciting him to fight back from their tent, Huguenard encouraged him to “Play dead!”

Her screams were the last sounds captured on the six-minute tape before the grizzly bear took her away and killed her.

On October 6, Treadwell’s friend Willy Fulton visited the campsite to pick up both of them the following morning. Instead, he discovered a ruined tent and a bear that was huddling over a dead body. The park rangers who were sent to the scene shot and killed over half a tonne bear.

In close proximity to the tent, they found Treadwell’s severed arm and skull. The body on which the bear had been feeding was that of Amie Huguenard. The stomach of the bear they shot contained other human body parts. Moreover, neither the decision by Treadwell to travel with Huguenard nor the timing of his return to Katmai has ever been explained.