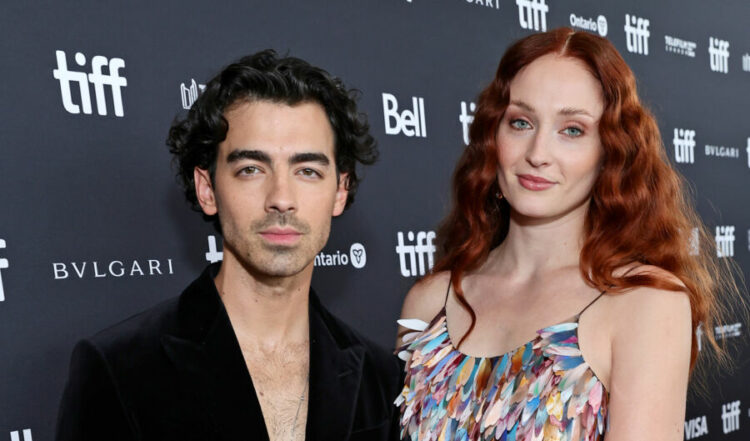 Joe Jonas turns up at the Toronto International Film Festival 2022 for the premiere of his upcoming movie “Devotion”, where his wife Sophie Turner stands by his side to support him. This event occurred on Monday, 12 September 2022, at Cinesphere, Toronto, Canada.

In May 2019, the couple vowed again to each other in Las Vegas in a surprise ceremony. Post this; they tied the knot again the next month in France. In July 2022, they were blessed with a daughter, Willa, who is two years old.

Joe Jonas and his wife shared the news of welcoming their second baby girl in July. The couple revealed their happiness in the People magazine. After this news, there first appearance on the red carpet was seen in this event

Talking about this event, Sophie wore an outfit by Louis Vuitton, which was a multicolor feather sequin gown. In addition, she had her hair colored red and opened with a center partition.

On the other side, her husband was bare-chested under a chic black velvet suit jacket with matching black pants. It is designed by the same designer, Louis Vuitton.

Famous Stars at the Premiere of “Devotion”

Actors like  Glen Powell, Daren Kagasoff,  Spencer Neville, Jonathan Majors, Christina Jackson, Nick Hargrove, Serinda Swan, Joseph Cross and  Boone Platt are the co-stars of Joe Jonas in this movie, and were also present there to support him along with the director J.D. Dillard.

This was Glen Powell’s best red carpet moment with his longtime girlfriend, Gigi Paris. The audience appreciated both of them together during the shoot of the “Devotion” premiere.

All about “Devotion” movie

Devotion is a biographical war drama movie written by Jake Crane and Jonathan Stewart. The film story is taken from the book Devotion: An Epic Story of Heroism, Friendship, and Sacrifice by Adam Makos. To recall the comradeship between naval officers and former elite fighter pilots Jesse Brown and Tom Hudner during the Korean War.

The movie was recently premiered on 12 September 2022 at the Toronto International Film Festival at the Ontario Place Cine Sphere. Post this event, the director announced the release date of the movie which is 23 November 2022.