Katie Taylor Versus Amanda Serrano: The Bout That Slammed All Gender Biases 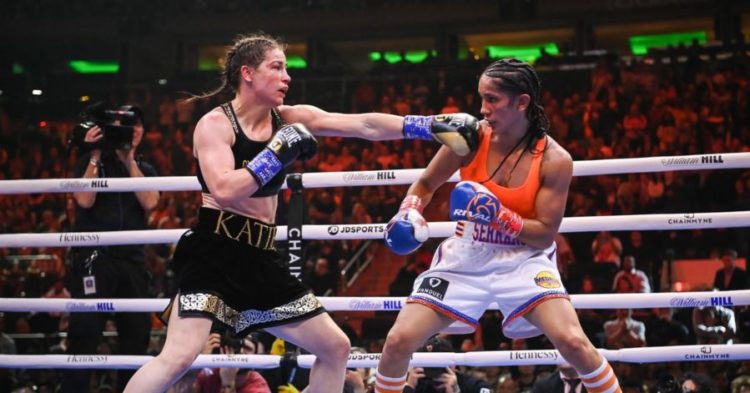 We live in a progressive modern world. In this modern-day world, science and technology have triumphed over various forms of social evil. However, even in such a progressive scenario, we witness gender biases. This is evident in many aspects of social life. It is also present in the sports world. Unfortunately, a gulf exists between the treatment that is dished out to men and women in sports.

Women are often unjustly considered second-class citizens, especially in body contact sports like boxing. Although the fight for gender equality has gained great momentum in other spheres of society, it is relatively new in boxing. Hence, there is a delay in its progress. We still witness gender bias in boxing. The likes of Ann Wolfe and Laila Ali created a stir in the 2000s. But since then, the momentum in women’s boxing has declined. Claressa Shields is one of the finest boxers on the planet. But the compensation she receives is unjust. However, the Katie Taylor versus Amanda Serrano bout seems to have changed the financial status quo.

Both Taylor and Serrano are accomplished boxers of the modern-day. Taylor possesses exquisite boxing skills. Her swift movements within the ring, coupled with her ability to adapt mid-fight, transcend the narrow boundary of gender. On a similar note, Serrano’s powerful punches supersede her 5’5” frame.

The audience highly anticipated this bout. As a result, more than 19,000 fans filled the sold-out Madison Square garden. People were excited to see the two world-class athletes perform at the highest level. Thus, the talent of Taylor and that of Serrano broke the shackles of gender norms, at least for that night.

Bringing back the Ali vs. Frazier vibes

Who can forget the historical rematch between Muhammed Ali and Joe Frazier in January 1974 at the Madison Square Garden? The mere presence of these boxing icons enhanced the action within the rings. The Taylor vs. Serrano brought back those same vibes. The pre-match excitement among the crowds was overwhelming. It is difficult to remember a fight in the recent past that experienced such an overflowing excitement at the Garden. The main event also witnessed the same vibes. Taylor was on point with her timing and counterpunching. Serrano was repeatedly caught by Taylor’s left hand as she rushed in.

However, Serrano knocked Taylor off her feet in the fifth round with her superhuman power. She did severe damage to Taylor with her left hand. But Taylor regained her control in the later rounds and snatched the necessary points to win the bout. That is why Taylor is the undisputed champion in the lightweight category. Nevertheless, both the boxers displayed great skill in the ring. This bout indeed knocked out all the stigmas surrounding women’s boxing.

Gender bias is a serious social evil, especially for women. It has kept them from realizing their full potential. Gender bias has also led to a delayed flowering of women’s sports, especially boxing. We have had skilled women boxers like Ann Wolfe, Laila Ali, and Claressa Shields. But they faced economic deprivation. The Taylor-Clarissa bout is a game-changer in this respect. The Madison Square Garden was completely sold out. The two boxers were terrific in the ring. Taylor achieved victory with her superior skill. The two world-class boxers knocked all forms of gender bias out of women’s boxing. This bout will go down into the pages of history, beyond any doubt.

Also Read: 8 Myths and Misconceptions About Pregnancy That You Should Not Believe