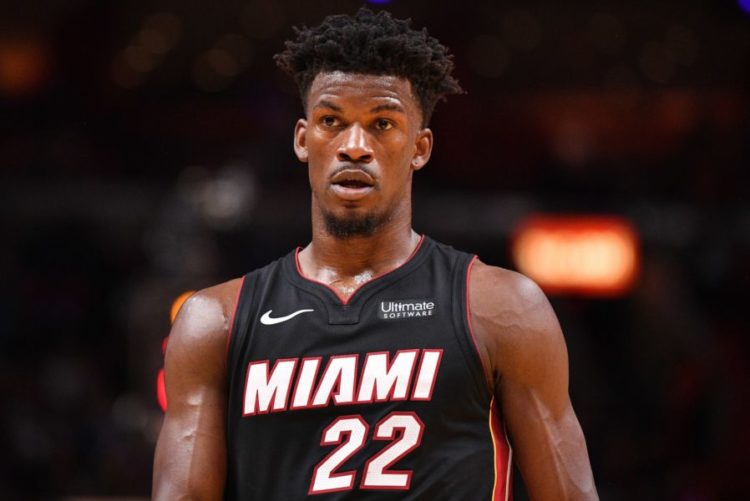 Jimmy Butler once again shines as the Miami Heats win Game 1 of the Eastern Conference Finals. Infact, there are some players who define consistency. Jimmy Butler is one such player. The Heats have made it to the finals twice, in three seasons. However, the credit for this stellar run of the Heats can easily be given to Butler. In fact,  he has been in a phenomenal touch in the playoffs. In this NBA playoff run, Butler has put up two 40 point performances.

Thus he has been instrumental in taking the Heats to the Eastern Conference Finals. In the Finals, the Heats are again facing the Boston Celtics. However, Butler’s stellar run for this season doesn’t seem to end, as he again UT up a 40 point performance in Game 1 of the Finals. He scored 41 points, as the Heats blasted the Celtics 118-107 on Tuesday, May 15. It is also interesting that Butler’s 27 points in this game, came in the second half. By now, it seems almost clear that Jimmy Butler will not settle for anything less than the champion’s crown.

In fact, his fans and basketball lovers have gone crazy on various social media platforms. They are showering praise on Butler for his performance this season. The Twitter users are flooding their timelines, reacting to Butler’s breath-taking performance. Read this article to discover more on this topic.

Game 1 of the Finals

The game did not start well enough for the Heats. At halftime, they were behind the Celtics by 8 points. Any coach, at such a time, would want to motivate his team. Erik Spoelstra also seemed to have thought of this. But Jimmy Butler decided to motivate the team not with words, but with his own performance in the second half of the game. Butler took  27 points in the second half, to take his team over the line. In his 41 points run, he scored 12 points from the field and 17 from the free throw line.

In fact, according to ESPN Stats and Info, Jimmy Butler recorded his fifth 40-point performance, while shooting 60 percent from the field. This makes him the third player on the list of most 40-pointers, along with Charles Barkley in the past 30 postseasons. Only LeBron James and Shaquille O’Neal are ahead of him.

Apart from points, Jimmy Butler put up a great all-around performance. He had nine rebounds, five assists, three blocks and four steals against his name. On the other hand, the Celtics did not have the services of Al Horford and Marcus Smart. Smart is suffering from a right mid-foot sprain that he took up in Game 7 of the semi-finals against the Milwaukee Bucks.

Horford on the other hand has entered the NBA health and safety protocols. In the game, the Celtics lessened their deficit in the second half. But it was not enough to take them over the line.

Following Jimmy Butler’s exquisite performance in Game 1 of the Eastern Conference Finals, the Miami Heat secured a 1-0 lead over the Celtics. The basketball world is thrilled with Butler’s performance. The fans and the basketball enthusiasts around the world took to Twitter to praise Butler. Click on the link to see one such tweet:

Even Ryan Clark was unable to hold his excitement as be tweeted after Butler’s performance. Click the link below to see the tweet:

Next, the famed NBA reporter for the Daily News also took to Twitter to praise Jimmy Butler’s stellar performance:

The NBA Twitter seems to love Jimmy Butler’s performance, absolutely. Of course, there is reason enough for that. After all, who can keep calm after witnessing such greatness on display? With Butler in a glorious touch, the Heats will look to extend their lead in Game 2 of the Finals. Thus all our eyes will be on that game. Are you ready to witness the Butler magic once again? Fasten your seatbelts!