Radium Girls: The Female Workers Who Lost Their Life to The Glowing Element 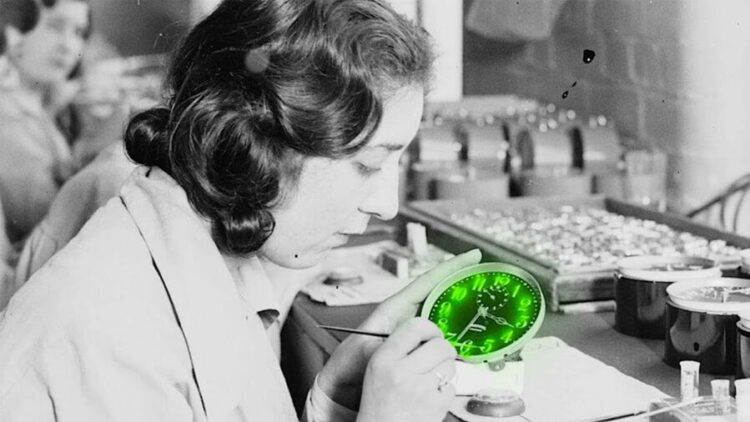 The Radium Girls belong to the period of World War I when many factories were opened across the United States. Radium is a fascinating element even today. Think about how amusing it would have been to people when radium was first discovered. Without knowing the dangers of it people at that time did use this element in many things.

Especially after the war, watch manufacturing companies take a huge leap forward. This result in the use of radium paint watch dials. However, to paint all the watches with radium factories choose women to work for them. At that time it was a good opportunity for women to earn. These watch factories did pay a great deal of money to women painting watches with radium. However, Let us see who are Radium Girls and some of the dangers they had to face.

The first discovery of radium

Radium a glowing element came to light before 20 years. The person who discovered is the genius, Marie Curie. Also, Pierre Curie, her husband was the co-inventor of radium. At that time they did not know the exact properties of this element. Radium was not just a material to play with but it was used for much greater things.

The use of radium for the treatment of cancer is a breakthrough medicinal discovery. Due to this many thought of radium as a magic element that is the biggest cure for diseases. Apart from its medical use radium soon becomes the star material for the commercial sector.

Using radium in toothpaste and cosmetics was much popular. This is the time when the Radium Girls enter the picture. With the rising factories, the need for workers did increase. For radium painting jobs many female workers were hired. Let us see the hard truth behind the glowing radio girls

The work that made radium Girls glow

The group of hardworking women who did the painting of dials with radium was called the Radium Girls. These women were exposed to huge amounts of radium every day. No one at that time knew about the dangers of radium. Also, daily exposure to radium did make the woman’s hair, dress, skin and clothes glow. Further, the women working in that industry apply radium to their dresses to make them look shiny. Moreover, some even apply radium paint to their teeth to glow at night.

During the parties, these women did look different from others as they had this paint all over them that glows. Without knowing the dangers of radium they used it mindlessly. Ingesting these radium paints is the dangerous part of their job. Let us see much more about radium Girls and some of the painful things they experience by exposing themselves to radium.

As a part of their job fine painting of dials with radium was important. Due to this, the factory managers did advise the woman to use their lips for fine painting. The factory managers also assure us that ingesting radium is not bad. The reality is exposing radium to the body can cause many side effects. Madam Curie herself faced many side effects when working with radium. At first, she did experience heat burns due to this element. Plus, the cause of her death is due to radium exposure. Radium did not leave the radium girls from its effects.

Soon, the exposure to this element starts to affect the girls brutally. Maggia is a radium girl who worked at Radium Luminous corp. This industry allowed female workers to paint watch dials with radium. After exposing herself to radium for many days Maggia starts to face sudden side effects. First appears a toothache to subside it they had to take out her teeth. This did not stop here when Maggia experienced toothache in the next teeth. Much more drastic symptoms also start to occur for her quickly.

Ulcers and pus start to develop in Maggie’s mouth. Lastly, bleeding escalates which makes it more painful. This disease spreads over her entire body. She was not able to recover after treatment and lastly faces a hemorrhage a condition that causes bleeding from all parts of the body. After these symptoms, Maggia dies in 1922. This death seemed mysterious even for health advisers. Let us see what happens next for the radium girls.

Denial by the radium factory about the dangers to workers

Not one radium girl but all of them start to face terrible symptoms. For some, the symptoms were as painful as Maggia and for many, it ended up in death. However, the brutal part of the story is that the factory manager of the radium girls denied any connection to their death. However, this industry was soon facing losses. Due to the downturn, the company finally accepts the connection between the death of workers and radium.

However, the company again research to prove that radium has nothing to do with death. They again try to make radium look like a safe material. The enraged Radium Girls did not let this matter go. Most of them were still counting their days due to illness but did not give up on this matter. Radium girls sue the factory to get justice and protect more workers from its ill effects.

A fair judgment after facing the worse

For many years Radium girls took the stand to prove the dangers of this element. However, due to the power and money of such factories, they could not sue it properly. Some of the Radium girls at that time did continue to lose their lives. Finally in 1927 Raymond Berry an attorney takes over this case. The radium girls did not have much time to get justice.

Due to this, they choose out-of- court hearing for this case. During this period the case of radium girls becomes controversial news. It was in 1938 Catherine Wolfe who was a dying radium girl properly sued the company. Her case was settled by the court, the company was demolished in 1968. Many radium girls did not live to see the day they got justice. Still, the struggles of these radium girls did not go in vain.