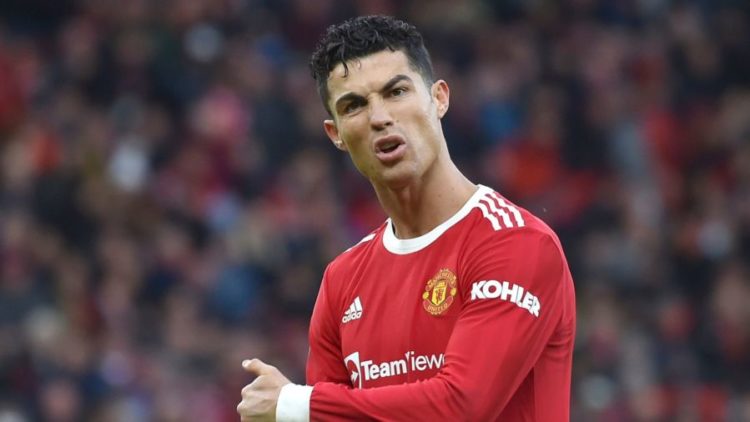 The Manchester United Forward Cristiano Ronaldo will not be playing against Liverpool in this Premier League after the unfortunate death of his newborn twin son with partner Georgina Rodriguez. One of the babies died and the couple shared about it on Monday. Ronaldo said, “Family is more important than everything and Ronaldo is supporting his loved ones at this immensely difficult time”. Because of this situation, he is not going to be part of the match. The family is also requesting privacy from the fans. Many people are consoling the family for their huge loss.

Cristiano Ronaldo is a Portuguese football player who plays as a forward for Premier League club Manchester United. He also is the captain of the Portugal national team. His age is thirty-seven years old. He is considered one of the best players in the world and has won five Ballon d’Or awards. The player is from the São Pedro parish of Funchal the capital of Madeira an island in Portugal. He is the fourth and youngest child in his family. Also, he has one older brother and two older sisters.

The player comes from a poor family and his mother wanted to abort him because of poverty and her husband’s alcoholism. But her doctor prevented her from doing the procedure. But Ronaldo grew up into a great football player. At the age of fourteen, he knew that he could play semi-professionally and ceased his education to play football. He also was diagnosed with a condition called tachycardia and underwent surgery for it.

Georgina Rodriquez is a twenty-eight-year-old model. She is a dancer too. On Instagram, she has over thirty million followers and enjoys popularity. She shows a glimpse of the rich lifestyle she leads on social media. Many times she goes on vacations with her partner and children.

She grew up in Jaca, Spain with her sister Ivana and her mother and father. Her beginnings were humble yet she enjoyed her life with her family. She went to Catholic school and devoted her time to learning ballads. After that, she moved to the big city of Madrid and became a luxury assistant in Madrid. She worked in Massimo Dutti and then transferred to Gucci. She started to wear Jean Gaultier couture on the red carpet at the Cannes Film Festival. When she was working in Gucci the romance between her and Cristiano began.

He was her client in Gucci and asked her to join him at an event. After being shot together they became a sensational couple. Many thought that she was his girlfriend. In her new Netflix series, she shared how she came on a bus to her shop and was then picked up by Cristiano in a Bugatti. In the series, they also explained that things were not so serious with them in the beginning. But now after five, they cannot live without each other.

Georgina likes to dance and wants to do it again. One time she performed a sultry dance and stole the limelight during the Italian dance festival. Cristiano was also in the crowd and he was cheering for his beautiful woman.

The family also toured Dubai and celebrated the release of the Netflix series ‘I am Georgina’ where she shares about her life. Cristiano also bestowed a great birthday gift for her by lighting the building in Dubai with ‘Happy Birthday Gio’. It was a three-minute laser show that cost Dhs 249,770 which was a trivial amount for the billionaire sportsman.

Cristiano Ronaldo turned to social media to share the heartbreaking news of his son. He and his long term girlfriend were eagerly expecting the birth of their twins. One baby survived but the other passed away.

The couple met when Georgina was working as a shop assistant for Gucci when he was representing Real Madrid in the Champions League. She became very close with the children of Ronaldo, Cristiano Jr and twins Mateo and Eva. She had her first child with Ronaldo named Alana and last year she became pregnant again.

After Ronaldo’s return to the Old Trafford, she shared how well the family is adapting to their new life in Manchester. She said that she spotted no difference after living in Italy for some years. She said “I haven’t noticed much of a difference since our living circumstances are almost identical to those in Italy, and we have a beautiful house to call our own.

But the sad news of their baby’s death broke their heart apart. Now the family is mourning the death of the baby. After they shared the news, people on social media expressed their sorrow. Many people asked Ronaldo to remain strong and promised that his fans are with him.

Ronaldo has six children. He became a father to his first child Cristiano Jr. on 17 June 2010 in the United States. He has full custody of the child and will not reveal the identity of the mother according to an agreement. In 2015 he started a five-year relationship with the Russian model Irina Shayk but it ended. After that Ronaldo became a father to twins. The names of the twins are Ava and Mateo born on 8 June 2017 in the United States via surrogacy.

The player started a relationship with Spanish model Georgina Rodríguez with whom he had Alana Martina in 2017. They had twins a boy and a girl on 18 April 2022 but the boy passed away during childbirth.

Ronaldo does not drink alcohol as he knows the bad effect it had on his father who died of an alcoholism-related liver condition at age fifty-two. He does not have any tattoos as he regularly donates blood and bone marrow. Further, he has made several contributions to charity causes. He donated £100,000 to the hospital that saved his mother’s life in Madeira.

In 2012 he joined FIFA’s “11 for Health” programme for raising awareness for the kids to stay away from drug addiction, HIV, malaria, and obesity.

Ronaldo is a great player. His recent loss of his boy has made him heartbroken and currently, he is mourning the loss with his family.