Shevchenko-Andrade Bout May Be UFC 261 Fight Of Night 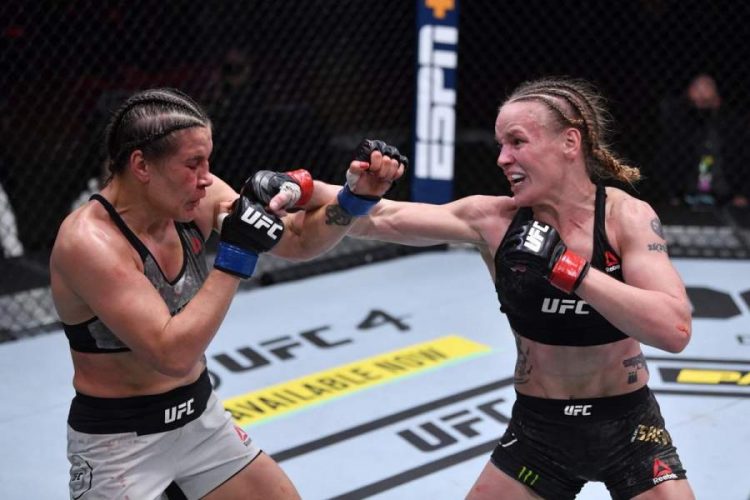 "Jessica Andrade" by Jeff Bottari/Getty is licensed under CC BY 3.0

There are three title bouts on tap for UFC 261. The main event is for the world welterweight belt between champion Kamaru Usman and challenger Jorge Masvidal. It’s a rematch from UFC 251, when Usman scored a unanimous decision over Masvidal, who took the fight on six day’s notice after COVID-19 forced Gilbert Burns to drop out.

The co-main event is a women’s strawweight title tilt pitting champion Zhang Weili against Rose Namajunas, a former champion of the division. Champion Weili has won 21 fights in a row.

The third title bout features flyweight champion Valentina Shevchenko squaring off against challenger Jessica Andrade for the women’s flyweight championship. While it may be flying under the radar a bit behind the other two title fights, the fact of the matter is that there’s been plenty of action at UFC betting sites on this evenly-matched and intriguing bout. It most definitely offers the potential to be the fight of the night.

Shevchenko, 20-3, has won six fights in a row. She’s already successfully defended her flyweight title four times since winning it via unanimous decision over Joanna Jędrzejczyk in 2018.

In fact, since 2010, the only losses suffered by Shevchenko were both decisions to Amanda Nunes, considered the best pound for pound female fighter in the promotion. In their second meeting, for Nunes’ UFC bantamweight world title belt, Shevchenko lost by split decision.

She avenged the only other loss of her career, a 2010 defeat to Liz Carmouche, by recording a unanimous decision triumph over Carmouche in a 2019 bout for the UFC flyweight belt. The 33-year-old Russian, ranked as the No. 2 pound for pound fighter among UFC female competitors, has posted victories over the No. 2 (Katlyn Chookagian), No. 4 (Jennifer Maia), and No. 8 (Jessica Eye) flyweight contenders.

Andrade Next In Line

Dropping down in weight class to face Shevchenko, Andrade is currently rated the No. 1 contender in the women’s flyweight division. She’s also ranked No. 5 in UFC pound for pound ratings.

There’s an odd set of circumstances on this fight card that sees Andrade intertwined with both fighters who will battle for the strawweight crown. Andrade defeated Namajunas in 2019 to win the world strawweight title belt. Later that year, in her first title defense, she was defeated by Weili.

Previously, Andrade was defeated in a 2017 bid for the strawweight title by Jędrzejczyk, the same fighter who lost the UFC flyweight title to Shevchenko. Making her flyweight debut in her most recent fight, Brazilian Andrade improved to 21-8 by virtue of a first-round TKO of Chookagian, ending a two-fight losing streak in the process.

For Shevchenko To Win

An eight-time Muay Thai world champion, Shevchenko is a devastating kicker. She’s also considered to be perhaps the most efficient fighter in all of UFC. Shevchenko never wastes movement. Her kicks are deadly accurate and her takedown attempts seldom fail.

Andrade is a straight ahead fighter, whereas Shevchenko is an expert at working angles in her attacks. She can be especially punishing with her kicks in this manner. Shevchenko is also very adept at the counter attack, with a knack for using an opponent’s aggression against them. She’s also known for her tremendous conditioning that enables Shevchenko to keep going at a relentless pace throughout a bout.

For Andrade To Win

Andrade cannot afford to provide Shevchenko with time and space. She must fight in close. Andrade’s strength is her power game and in dropping down to this weight class, there’s no doubt that she packs a harder punch than anyone in the division.

She needs to crowd Shevchenko, stay in her face, remain on the attack and seek to tie the Russian up in clinches. Crowding her along the fence could prove to be another successful strategy. Other fighters have created opportunities against Shevchenko in this manner.

Andrade figures to be the toughest test for Shevchenko, who’s never lost at 125 pounds. Andrade has already boasted that it is her belief that Shevchenko and not Nunes, is the toughest female pound for pound fighter in the UFC.

Should Andrade defeat Shevvehnko, she’d join Nunes as the only female fighters in UFC history to win world titles in multiple weight classes.