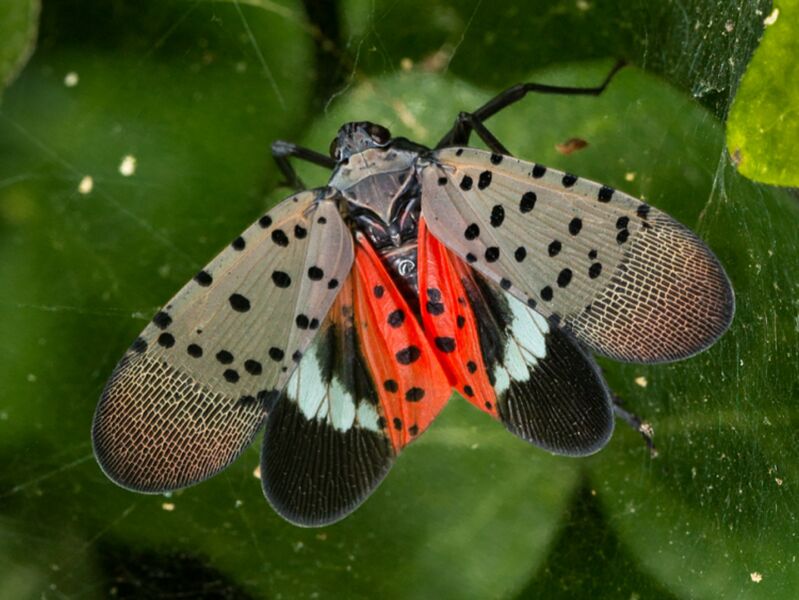 The spotted lanternfly has resurfaced in New York, New Jersey, and other areas of the country. Therefore, Numerous states are at risk of invasion due to the pest’s propensity for hitchhiking.

As per reports, Senate Majority Leader Chuck Schumer wants federal funds to take immediate action to eradicate the spotted lanternfly. As it might cost $22 million of federal funding to stomp them out nationwide.

Schumer further emphasizes that if the spotted lantern population continues to expand. It will pose a multi-million dollar threat to New York’s agriculture and tourist sector.

Therefore, let’s find out about Spotted Lanternfly and the risks it will pose in the lives of New York natives.

About the Spotted Lanternfly

According to the U.S. Department of Agriculture’s Animal and Plant Health Inspection Service, the spotted lanternfly originated in China. It first appeared in Pennsylvania in 2014. It is black, white, and red throughout (APHIS).

The spotted lanternfly feeds on a variety of fruits, and ornamental and woody trees, with tree-of-heaven being one of the favorite hosts. They are invasive and can spread over vast areas. It gets transmitted by people who carry infested material or products containing egg masses.

If permitted to expand, then the insect might impose a threat to the country’s grape, orchard and logging industries.

Recently, there is news of pests being found in 11 such states in the U.S. They feed on over 70 plant types, including fruit trees and grapevines, leaving their hosts susceptible to illness. The New York State Integrated Pest Management program at Cornell University has tracked confirmed pest sites with an interactive map that was last updated on August 8.

Although the spotted lanternfly (SLF) can hitchhike, it cannot fly vast distances. SLF start looking for exterior surfaces to lay their mud-like egg masses on in the fall.  These egg masses can be discovered on tree bark, lawnmowers, bikes, and other outdoor items as well as on many modes of transportation.

Spotted lanternfly egg masses are roughly an inch long and resemble a smear of mud. In areas where SLFs are known to exist, locals should crush and scrape them off if they come across them.

Travelers going through SLF quarantine zones should thoroughly check their cars, trailers, and even the clothes they are wearing. So as to avoid unwittingly bringing the spotted lanternfly from one quarantine site to another.

Effect of the Spread of The Spotted Lanternfly

The economic consequences could be catastrophic. A spotted lanternfly infestation in Pennsylvania cost the state roughly 484 jobs and $50.1 million in 2019, with an estimated annual cost of at least $324 million if not controlled.

According to the New York Department of Environmental Conservation, the state’s apple and grape output alone is worth $358.4 million, and the “full level of economic damage this bug could bring is unknown at this time” (DEC). If the spread continues, the “grape, orchard, and logging industries” might be badly impacted nationwide.

What if there were more funds?

A number of safeguards are already in place. But Schumer believes that more would be required to halt the invasion properly. To prevent further spread, numerous departments in New York are collaborating through trapping surveys and inspections.

In order to combat the spotted lanternfly, which is “now nearing its adult stage and will soon start producing egg masses that will hatch next spring,” New Jersey declared that it would compensate counties up to $15,000 for their costs.

Schumer is advocating for $22 million in federal funding for the APHIS program in the 2019 budget. Additional funding, according to him, will “improve their work with states to avoid & control invasive species like the Spotted Lanternfly” and aid in raising awareness among the general public.

According to Schumer, “We need to eradicate this virus before it spreads, or otherwise, our farmers and local businesses could suffer millions in damage and an uncontrollable swarm.”

What should I do if a spotted lanternfly appears?

Many states have their own reporting portal where people can record sightings of spotted lanternflies. Anyone who finds a spotted lanternfly outside of a quarantine region, APHIS will ask them to contact their State Department of Agriculture to report its location. Finally, smash it.

Why is It Hard to Find Real Jewelry?

Know How to Measure Hips: A Complete Guide

How to Tie A Tie: The Effortless Ways to Look Stunning in Formal Wear