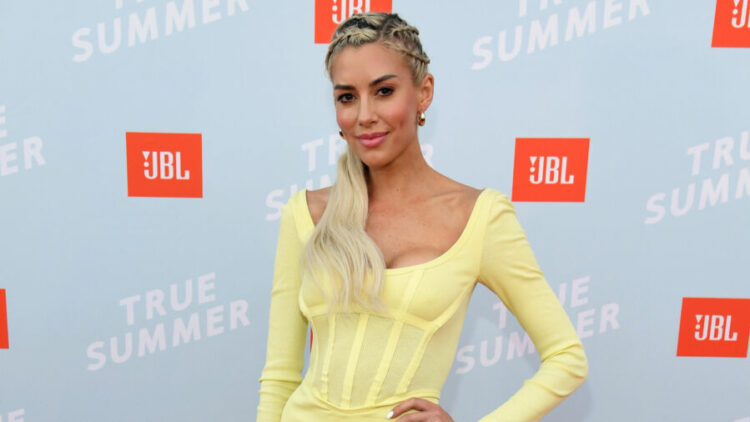 Needless to say, Netflix’s hit show “Selling Sunset” took the world by storm and instantly became people’s favorite. So it is quite natural that after watching “Selling Sunset,” people are amazed by Heather Rae Young’s Playboy look. Yes, during the early seasons of the Netflix series, the 34-year-old revealed that she used to work as a Playboy Playmate way back.

However, it seems like this is brand new information to a litany of Selling Sunset fans, who have only learned that Heather once donned the iconic rabbit ears thanks to a recent TikTok! However, if we talk about the show “Selling Sunset,” we can say it is one hell of a show. The show has the elements that make a show popular. Starting from the amazing properties in the Hollywood Hills, the high-stakes office environment, and the drama between model-gorgeous real estate agents.

In fact, people enjoy the inner personal drama between Christine Quinn and Chrishell Stause. Even though a lot was happening in the show and between Quinn and Stause, agent Heather Rae Young largely minded her own business. She was in and around the drama; however, she seemed to be one of the least frazzled when newcomer Stause joined the firm in Season 1. Let us share some interesting details about Heather Rae Young in this article.

Did You Know Heather Rae Young Had a Fairly Rural Upbringing?

Young was born on 16th September 1987 in Anaheim, California, in the United States. Therefore, she is currently 34 years old. In fact, to be more specific, the actress grew up in Running Springs, California. This small mountain town is situated close to the San Bernadino National Forest. Therefore, she had spent her childhood days among trees and forests in the lap of nature.

So in an interview with Playboy, they described Young’s childhood as “idyllic.” She spent a good time outdoors, hiking with her dogs, taking dance lessons, and enjoying the small-town life.

The Selling Sunset Star Had a Relaxing Childhood

As the saying goes, we should not draw a conclusion based on one’s looks and appearances. We can say this with regard to Heather Rae Young. Well, judging by how gorgeous she is, you would probably think she is the high school queen bee. However, it was not so; her high school days were pretty relaxing than you might think.

Since she grew up in a small town, her high school had students from many different communities surrounding her. She had made it clear that even though the class was small, “we didn’t have separate cliques in school. We still had different types of kids, but everyone was friends with each other.”

Needless to say, most of us have worked odd jobs in high school. So be it babysitting, waiting tables, or bussing at coffee shops, the list is endless. In fact, many of you might also work on weekends to earn some extra bucks. Well, Heather Rae Young was no exception at all.

In an interview, she shared what her first job was. She might be pretty famous now; however, life was not a bed of roses at that time. She worked as a waitress at a pizza restaurant. Since she lived very close to the San Bernadino National Forest, skiing was the big thing.

Her second job was that of a ticket checker for the Snow Valley Ski Resort. However, she soon realized that staying in Running Springs was not for her in the long term. So she moved out right after she turned 18. Young relocated to Redlands, California, and stepped into the glamorous world of the film industry to begin her career.

What Motivated Heather To Pursue A Career In Modeling?

Well, all of us saw Heather as a hot and sensual model. However, how many of you know why she took up modeling in the first place? In an interview, Heather Rae Young shared that when she was just 14 years old, she saw her very first issue of Playboy magazine. It belonged to the father of a boyfriend. She was taken aback by her own beautiful body and wanted to pursue the same for herself.

She added that even though it might sound stereotypical, she wanted to be glamorous and sexy like all those models who graced the covers of famous magazines. So she soon started modeling on small gigs. However, it was not until she worked with famous photographer Josh Ryan that she made a conscious effort to go for the Playboy approach. She was ready to up her game as a model.

Who is Heather Rae Young Dating?

When Tarek El Moussa asked Heather Rae Young out on a date, she was still in a long-distance relationship with her ex. So at that time, this halted El Moussa’s efforts temporarily. He recalled that he bumped into Young again with some friends and asked her out for the second time. This time he was lucky; she agreed to go out with him.

Their fans spotted them as a couple when they were spending time with each other in Redondo Beach, California. Moreover, Young also shared how happy she was to get El Moussa in her life. They got engaged in July 2020.

Needless to say, money indeed has the power to bring the world within your fingertips. Well, in this regard, we can mention Heather Rae El Moussa’s eight-carat ring. So naturally, when El Moussa put the ring on Heather’s finger, everyone wanted a zoomed-in pic of the diamond ring.

The ring she wore at her engagement was specially made, and the eight carats are highly rare and valuable. So quite naturally, the piece of jewelry will be worth a lot. Yes, you guessed it right, it was around $12,500 to $40,000 per carat for a ring of this size. That’s a hell lot of money, don’t you think?

After their marriage, the actress went from Heather Rae Young Playboy model to a stepmom. Her husband, El Moussa, has two kids from his previous marriage with Christina Haack, and Heather is their stepmom mow.

So as we conclude, we can say that Heather Rae Young is an example of all those women who have created their strong identity in the professional field. However, they are equally capable of managing their personal lives as well. We hope that she can manage her real estate business and her career as an actress simultaneously.