Why is Declan Rice Rated So Highly? 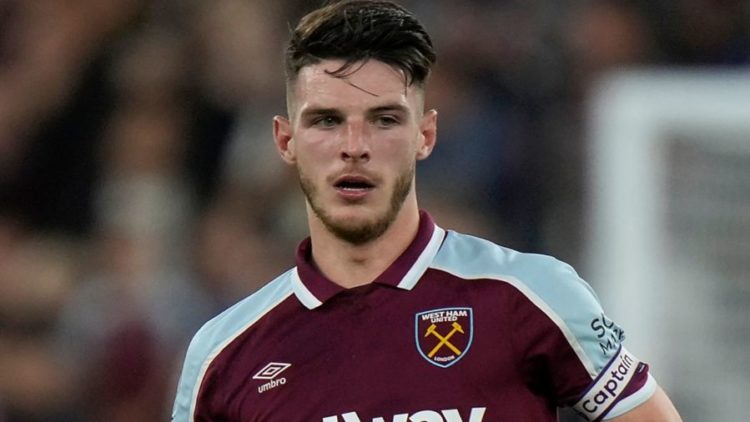 Do you love watching football matches? If your answer is Yes, you must have indeed heard about the star footballer Declan Rice. Needless to say, he is presently one of the most popular players. Despite still very much being in the early stages of his career, Rice is a leader on and off the pitch for West Ham. At the same time, he also does a similar job when surrounded by senior players on international duty with England. So you can understand his popularity level at such a young age.

So would you like to know more about Declan Rice’s career in detail? Stay with us until the end, as we will share some of the exciting aspects of his career in this article. Let’s have a look!

Who is Declan Rice?

Since you are reading this article, it is evident that you are curious to know about the star footballer, Declan Rice. Well, you are at the right place as we will share with you some of the significant details of his career and life.

Declan Rice was born on 14th January 1999. Therefore, he is currently 23 years old. Yes, at this young age, he has achieved quite a lot. He is an English professional footballer playing as a defensive midfielder or center-back for Premier League club West Ham United and the England national team.

At the same time, he is a real force in West Ham’s midfield. Therefore, he can dominate his opponents physically and with the ball at his feet. In fact, he is also a significant part of the reason West Ham has shown such marked signs of improvement under Moyes. So indeed, he is one of the great footballers, and in a few years, you can easily draw a comparison between him and the legendary player Christiano Ronaldo.

Some Impressive Skills of Declan Rice as a Player

As we mentioned earlier, Declan Rice is presently one of the greatest footballers. This star footballer has already captured the hearts of countless fans with his impressive goals and handsome look. However, do you know what skills he has as a player?

So if you have seen some of the star player’s matches, you will understand that Rice is a defensive-minded player. He does his best work by winning the ball and protecting his defense. Moreover, in his seamless conversion from a central defender into a defensive midfielder, he has shown a natural talent for delaying and breaking up attacks. It might sound surprising to some of you but, at times, even at the point of an attacking transition for his opponents.

Therefore, this has repeatedly proven that he is naturally a born genius for this game. It’s as if he does not have to put much effort into it. His fans also say that he has the ability to spot danger that only the best ball-winners have. In fact, in this way, Rice is also similar to N’Golo Kanté.

So now, you must have a question on your mind why is it so, right? Well, it is because, like Kanté, he also covers an awful lot of ground and makes both tackles and interceptions in significant numbers. Rice does this even if he doesn’t quite match the Frenchman’s statistics. So by now, you must have got a brief overview of why he is rated so highly.

So it was on 16th December 2015, just over a year after joining West Ham United at the youth level, Rice signed his first professional contract with the club.

In fact, due to Declan Rice’s all-around ability and his formidable partnership with Soucek, his manager can play formations with just two central midfielders. Moreover, the West Ham manager Moyes favors a 4-2-3-1 in games. So it becomes easier when he wants his team to dominate the ball and a 3-4-3. He does this when he wants more security or simply matches the opposition’s shape. Furthermore, Southgate is also able to play a midfield two with Rice in his team.

Needless to say, Rice’s club form has had a positive impact due to Soucek’s success since arriving from Slavia Prague. The Czech Republic international and Rice alternate positions regularly but of the two, Rice has slightly more freedom to attack. He makes lung-busting runs to drive his team towards goal, though it is rare to see either player advance beyond the ball.

In fact, Rice and Soucek’s close bonding and their limiting of the opposition’s space between the lines help them win the matches. So you can well understand that Rice plays a key role in winning the ball back.

At the same time, he also does an essential job in helping West Ham break the opposition down with line-breaking passes into Bowen, Fornals, and others. So you can say he also likes to pull out wide Especially to the left side of their center-backs after Aaron Cresswell. Also, he is far more effective playing those balls from left to right rather than from right to left.

Is Declan Rice the Right Player for Manchester United?

If you follow the sports news, you must have heard that Chelsea sacked Frank Lampard a few days back. So in one way, this will be advantageous for Manchester United. This has actually opened up possibilities for United to pursue Declan Rice’s signature from West Ham. Needless to say, they require a defensive midfielder to succeed Nemanja Matic. Therefore, no one can be a better option than him.

Rice seems to be a wise choice since he is quite young. At the same time, he already is an England International regular along with a Premier League winner, with 118 games. When the fee is around $70 million, you expect perfection. Therefore, with Rice on the team, United will be a great team. We are yet to see what happens.

So as we conclude, we can say that Declan Rice is presently one of the most popular young footballers. Therefore, opting for him will indeed be an excellent decision for any team. Especially when Manchester United, it is also a golden opportunity for him to flourish.

Also read: The Pressure’s Staring Jayson Tatum In The Face Despite Him Not Feeling It