2023 Great Britain Britannia Coin: A Tribute to Her Majesty! 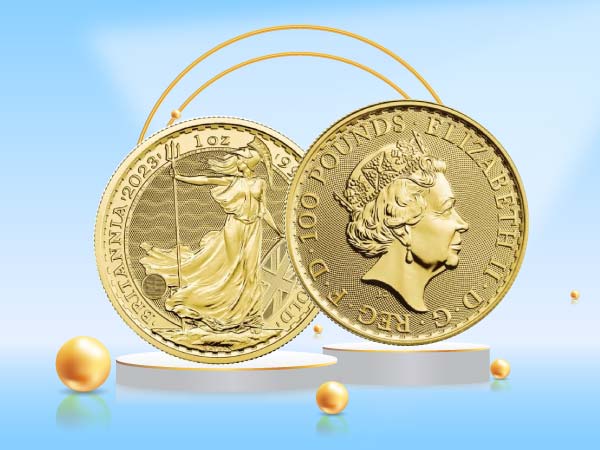 The British Royal Mint is renowned for manufacturing precious metal products that combine traditional craftsmanship and cutting-edge technology. Bold Precious Metals is delighted to present the newest offering from the British Royal Mint: the 2023 Britannia Gold and Silver Britannia Coins. The coin’s first minting, Type 1, will feature Her Majesty, Queen Elizabeth II’s effigy for the last in the Britannia series on the obverse.

The second minting, Type 2, will feature a new obverse design highlighting King Charles III’s effigy in the new year. The 2023 Gold Britannia Type 1s will be the fifth and final issue in the 2023 Britannia series commemorating Queen Elizabeth II.

What are the key features of the 2023 Britannia Bullion Coin?

Unlike other portraits of the Queen, Clark’s was created entirely without the use of manual sculpting, instead using computer-aided design software to transform his original sketches into the necessary low-relief model. His description features a distinguished Elizabeth II wearing the Royal Diamond Diadem crown she wore at her coronation, representing a transitory time of her own.

Britannia was intended to compete with the Krugerrand, the South African Mint’s flagship coin and the first bullion coin to contain precisely 1 oz of gold, and was able to take control of the rapidly expanding gold investment market. The Royal Mint issued its 1oz gold Britannia coin in 1987, exactly 20 years after the Krugerrand.

In 2013, the Royal Mint recognized the coin’s worldwide potential growth and increased its purity to 999.9 (24 carats).

Why Invest in the Britannia Coin?

This is one of the earliest and most recognizable markets. This is the investor’s liquid choice for liquid option as it has worldwide acceptance.

Due to their status as British legal tender pound sterling coins, the 2023 Britannia coins are exempted from capital gains tax.

Why buy Britannia from BOLD?

Including precious metals as a part of an investment portfolio is a great way to solidify your portfolio. There are many online dealers, but one should always go with a trusted dealer that has the best prices, the highest quality, and the best customer service. BOLD Precious Metals has the most consistent low prices, availability, and great customer service. Why shop anywhere else?

Affiliation with the most trusted coin service providers

BOLD is proud to be affiliated with the best bullion-related service providers in the world, including:

Don’t miss out on this final issue of the Queen Elizabeth II effigy on Britannia coins!

What are The Best Ways to Be Financially Savvy?

Want to Save Big? Here are The Biggest Roadblocks To Watch Out for

Fidelity Investments Review: What are The Pros and Con’s?