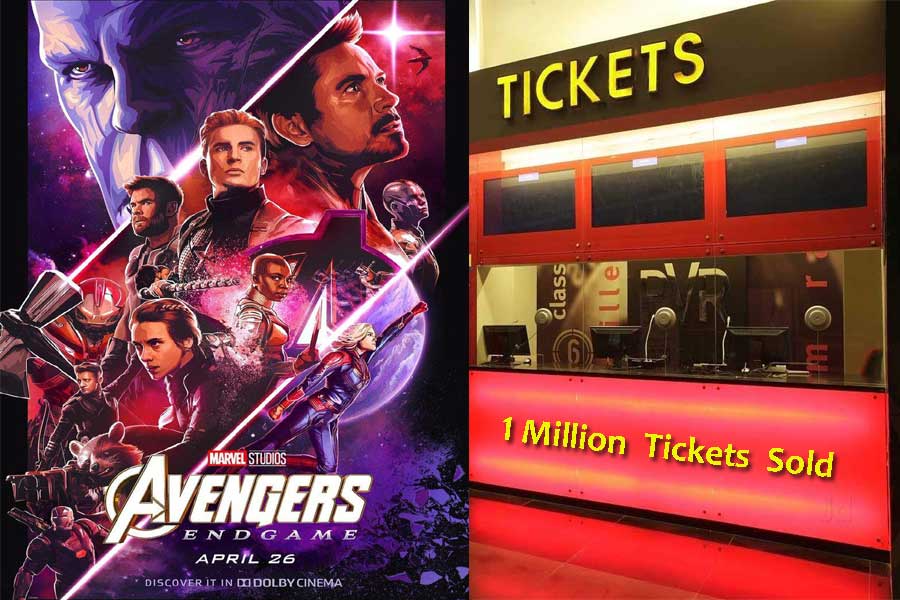 Are you also a Marvel Fan? I think yes and it has been proved as the Avengers Endgame has broken all its record by selling one million tickets in just one day on the ticket booking portal, BookMyShow ahead of its release on 26 April 2019.

It looks like fans have been waiting for so long for this movie and it’s becoming too hard for them to control now. The very popular ticket booking portal, BookMyShow has never seen such a record in history like it is witnessing now.

As per the sources, the portal has encountered a peak of 18 tickets per second even before its release in Cinema houses on 26 April in the different languages like English, Hindi, Tamil and Telugu.

Deadline confirms that #AvengersEndgame has sold tickets worth $120 Million in Advance!

The Chief Operating Officer (COO) of Cinemas, BookMyShow, Ashish Saksena has said in a statement that, “We expect Avengers: Endgame to break more records as cinemas continue to open the advance bookings.”

Avengers Endgame is the 22nd film from the Marvel Cinematic Universe, after its latest release movie, Captain Marvel last month.

In a tweet, trade analyst, Taran Adarsh said: “Avengers: Endgame advance booking is unheard of, unimaginable and unprecedented. Much better than several Hindi biggies that opened in 2018 and 2019.”

Vice President Programming, Carnival Cinemas, Rahul Kadbet told that the interest has been more in metropolitan cities like Delhi and Mumbai than any other city as of now.

The movie will show supervillain, Thanos involving in an epic battle with superheroes like Iron Man, Thor and Captain America, was anticipated by the audience.

Chief Programming Officer, INOX Leisure Ltd, Rajender Singh Jyala has said that “As anticipated, across the country, the shows of Avengers: Endgame are almost sold out in a very short time. The first-day advance sales have been unprecedented.”

People are so crazy about the film that they even flew to some other cities to watch the movie. Imphal based engineer, Sanjay Nongmaithem told that “he has been following the serried since its beginning in 2008 with Iron Man. Her 8 years old daughter, Gracy is also a big fan of the Avengers.

He further told that theatres in his city don’t screen Bollywood or Hollywood films so they are flying to Guwahati to watch the movie.

Even one fan tweeted on twitter requesting to the film’s director, the Russo Brothers. “I am from India and a huge Marvel fan. In Silchar, Assam, there are two movie halls but none are screening Avengers… Help us.”

It’s unbelievable how people are getting mad over Marvel. People are making so much effort to watch the movie. How many of you could have done this if you have come across such a situation in real?