Sunny Hindustani From Punjab Gets The ‘Indian Idol 11’ Winner Title 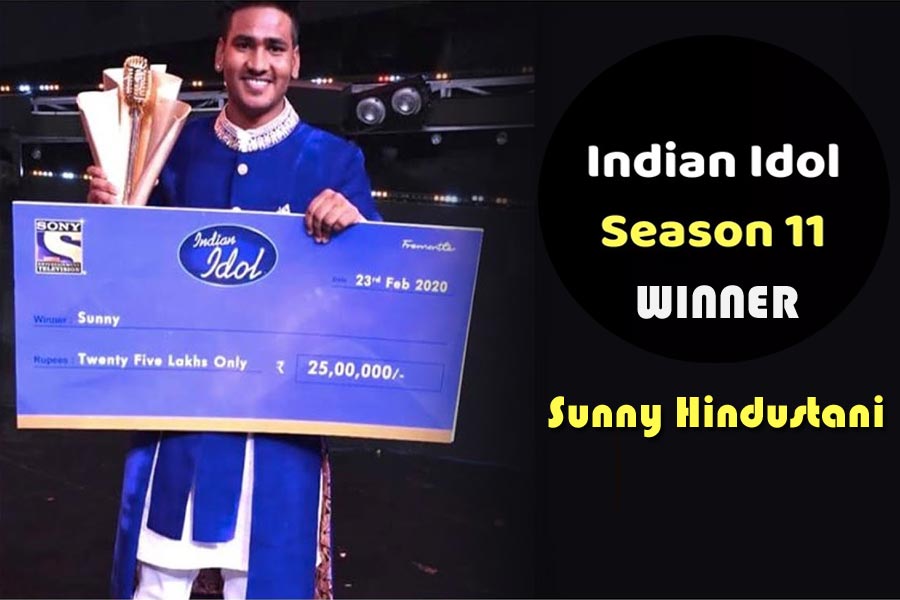 After Big Boss, Indian Idol is one of the most popular shows that come on Sony TV. And this year, we have witnessed some of the best and talented singers from all across the world who won the heart of the entire nation as well as the three beloved judges i.e. Neha Kakkar, Vishal Dadlani, and Himesh Reshammiya.

Finally, the show has come to an end last night i.e. on 23rd of February, and the winner of this year ‘s Indian Idol is Sunny Hindustani‘ who hails from Punjab. Apart from winning the title, the singer also bagged the cash prize of Rs. 25 lakhs. Not only this, but he also got the golden opportunity of singing in the next project of T-series.

Who were the top two finalists?

Apart from Sunny Hindustani, there were other contestants also i.e. Ankona Mukherjee, Adriz Ghosh, Ridham Kalyan, and Rohit Raut. Sunny, who mesmerized everyone by his soulful singing and sang a medley of songs like Bhar Do Jholi Meri, Halka Halka Suroor won praises from Ayushmann Khurrana and Neena Gupta who were the special guests on the finale night.

The top two finalists on the finale night were Sunny and Rohit. Ankona Mukherjee emerged as the second runner-up and she received a cash prize of Rs. 5 lakh. Ridham and Adriz came on fourth and fifth positions respectively and they got Rs. 3 lakh each.

Also read: 8 Bollywood Female Singers Have Incredible Beautiful Face As Like Their Voice

Why was Sunny so famous?

Sunny has been of the most talked-about contestants on the show since the very beginning. He got famous very quickly as his voice resembles Nusrat Fateh Ali Khan a lot. The moment he arrived for the auditions, he left all the three judges impressed. Since the show got started, he was appraised by many of the Bollywood celebrities too as Kunal Khemu gifted him Lord Lakshmi’s locket.

Not just Kunal, even Ajay Devgan, and wife Kajol were impressed with Sunny’s singing and praised him and Kumar Sanu gifted him a jacket which he wore while performing.

The finale night also had performances from Krushna Abhishek and Bharti Singh who made the finale night even more fun and enjoyable. This season was in the news because of Neha Kakkar and host Aditya Narayan’s wedding gimmick. Indian Ideal season 10 winner Salman Ali was there in the finale to encourage the finalists.

Who were the top finalists this season?

The two top finalists i.e. Sunny Hindustani and Rohit Raut. There were other three finalists as well who rocked this season with their soulful singing. To name them, Ankona Mukherjee, Adriz Ghosh, Ridham Kalyan. This year, there was a cut to cut competition among all of them. As it was very hard to decide who will be the winner as everyone was so deserving.

It was great watching Sunny who came from such a background which even one can’t imagine. He was well deserving and if we talk about 15 years old Ankona Mukherjee, she gave a big fight to the other boys as she was the only girl among four boys. She entered the show as a wild card entry. Seriously, it was great watching them all.