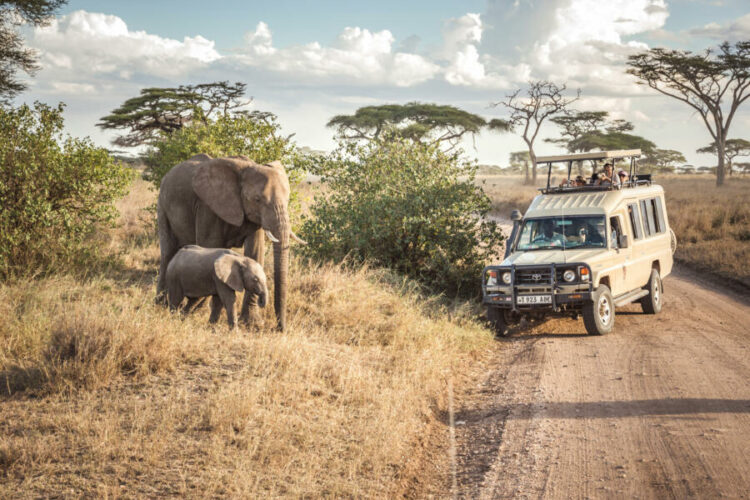 Tanzania is placed among the absolute best safari destinations in the whole world. Most likely, you’ve seen the iconic landscapes of the country’s national parks such as the Serengeti, Ngorongoro, Lake Manyara, and many others, on National Geographic, Discovery Channel, or on numerous social media posts. So what is so attractive about Tanzanian safari apart from the stunning and diverse landscapes?

Tanzania is home to about 20 percent of Africa’s large mammal populations which are spread across the country’s huge network of national parks and protected areas. In this article, we will look at the most amazing animals that you can see with your own eyes on Tanzanian safari trips.

What are the most interesting animals you can see in Tanzania?

Being one of the most biodiverse countries on the planet with over 55.000 confirmed species, Tanzania offers safari trips that are never boring. Every place here is teeming with wildlife: from endless savannahs and lush rainforests to freshwater lakes and slopes of the iconic Mt Kilimanjaro.

Of course, there is a number of animals here that are particularly impressive, like the “Big Five” (lions, elephants, buffalo, leopards, and the black rhino), hippos, crocodiles, giraffes, and many others. Below you will learn more about the TOP-10 most iconic animals that you can see on a Tanzanian safari trip.

The African lion (Panthera leo), being the largest cat on the continent, is the undisputed king of the savannah. Lions, unlike most other wild cats, are social creatures and typically live in family groups that we call lion prides. Interestingly, female lions are the ones who do the hunting, while males (who are in the minority in the pride) are tasked with protecting the territory. Every now and then you might also witness lone nomadic hunters – male lions that roam the wilderness on their own.

Apart from their spectacular looks, the lions are also true apex predators and have few enemies in their homeland, unless they provoke an elephant or a rhino, of course! The sound of their roar can scare any unprepared adventurer. And no wonder – a lion’s roar can be heard from 8 kilometers (5 miles) away.

The lion species is classified as vulnerable – there might be as few as 20.000 lions left in the world. Luckily, Tanzania is home to a healthy population of these cats and they can be spotted quite frequently on safari trips in many Tanzanian wildlife reserves.

The African elephant (Loxodonta africana) is perhaps one of the kindest and wisest animals you can meet, in our opinion (if you’re nice to them). Standing up to 4 meters (13 feet) tall and weighing up to 6350 kg (14,000 lbs.), it is also the largest land mammal and the heaviest land animal in the world.

Elephants are important ecosystem engineers. They make paths through the trees that are used by other species and serve as natural fire breaks. Many plant species rely on these animals to disperse their seeds across large territories. Such seeds go through the elephant’s digestive system and sprout miles away from the parent plant. Even the large footprints left by these giants often fill with water and become home to tadpoles and other organisms.

It is not difficult to spot a group of elephants on a safari trip in Tanzania – they are present in most of the country’s national parks. If you really love these animals and want to see their behavior in large groups, then Tanzania is definitely the best choice. Tarangire National Park in particular is said to have the highest population of elephants in the country.

A herd of giraffes (Giraffa camelopardalis) with magnificent African savannahs in the background is another signature view that you have a chance to witness on a Tanzanian safari trip. These gentle herbivores with their unmistakable long necks and spotted coloration are one of the most unique and mesmerizing animals in Africa.

Giraffes are the tallest mammals on earth, and despite their somewhat awkward builds, they can run as fast as 35 miles per hour on short distances. Fun fact: a giraffe’s neck is too short to reach the ground! They have to awkwardly spread their hind legs or kneel to have a drink from a water source.

Giraffes can be seen in numerous national parks across Tanzania, such as the Serengeti, Ruaha, and Tarangire, among others.

Would you believe that these chubby herbivores are considered to be one of the most dangerous animals in Africa? Hippos (hippopotamus) are very large (weighing up to 1800kg or 3,960lb!), fiercely territorial, and quite agile in or out of water. They prefer to spend most of their time in cool lakes and rivers, where you can see them on a safari trip.

Tanzania has a large population of hippos and with an experienced safari driver, you’ll have a high chance of spotting these adorable but fearsome animals from the safety of your safari vehicle.

The black rhino (Diceros bicornis) is also one of the largest animals you can see on a safari – they can weigh up to 1400kg (3,080 pounds). These formidable giants are remarkably fast and can be aggressive if provoked. So make sure to never stand between a mother rhino and her baby! Although rhinos have poor eyesight, their excellent sense of smell compensates for that.

Black rhinos are classified as critically endangered – there are about 6000 of them in the whole of Africa. However, you have a chance of spotting a rhino in one of the northern national parks in Tanzania. And what a memory that would make!

Wildebeest and other antelopes

Wildebeest (Connochaetes), also known as gnu, is one of the most well-recognized antelopes you can see on a safari trip in Tanzania. They are playful, intelligent, and can run with the rest of the herd just a few days after being born! The Great Wildebeest Migration is considered the largest seasonal movement of animals on the planet.

These large antelopes get together in huge herds to move through Tanzania and a part of Kenya in pursuit of rain and fresh pastures. But you’re sure to see plenty of wildebeest regardless of the date of your safari trip.

Tanzania is also home to many other amazing species of antelope – from the tiny dik-dik and duiker to the mighty kudu and eland.

Another easily recognizable African animal that thrives in the savannahs of Tanzania is the zebra (subgenus Hippotigris) with its stylish coat of black and white stripes. The stripes on each zebra are as unique as a human fingerprint, and help other zebras to tell them apart in the wild. Just as horses, to which zebras are related, they can run quite fast.

Due to many factors such as habitat loss, the three species of zebra that live in Tanzania are classified as either near-threatened or threatened. However, you still have a chance to see many zebras in the wild in one of the vast national parks of Tanzania.

These ancient creatures have survived since the times of the dinosaurs, and can still be found in almost every major river in Africa, as well as in many lakes. Nile crocodiles (Crocodylus niloticus) can reach 6m (20 feet) in length, while the strength of their bite is fearsome – one of the highest of all animals.

The most large-scale hunting scenes involving crocodiles happen during the Great Wildebeest Migration, when literally over a million antelopes and zebras have to cross huge crocodile-infested rivers such as the Mara river that flows through Tanzania and Kenya.

You can see these truly prehistoric creatures in many rivers and lakes of Tanzania, so when you go on your safari trip, look out for them!

African wild dogs (Lycaon pictus) are really interesting and beautiful wild canines that many people have not heard about. They are social creatures and gather in packs of about 10 dogs, but there have been reports of packs with more than 40 animals. African wild dogs look like an artist painted them: their irregular, mottled coat features patches of white, red, brown, black, and yellow fur.

Nowadays, these creatures are endangered. If you want to spot one of them, you might consider taking a safari trip to distant off-the-beaten-path protected areas such the Selous Game Reserve or Ruaha National Park.

Tanzania is home to healthy populations of chimpanzees, baboons, and a great number of other primates of various sizes such as bushbabies, red-tailed monkeys, mantled guerezas, and more. You can see them in most if not all national parks and reserves of the country.

These creatures are thought to be our distant relatives and it is very interesting to observe their habits and activities in the wild. But be careful on your safari trip, monkeys love to snatch things from unattentive tourists, often performing stunts to get a treat.

Other animals of Tanzania

Considering the stunning biodiversity preserved in Tanzania, no “top-10 list of animals you can encounter on your safari strip” can be exhaustive. We haven’t mentioned other wild cats like the cheetah, serval, leopard, and caracal. You can also spot warthogs, hyenas, buffalos, mongooses, leopard tortoises, all kinds of snakes and reptiles, and many, many other animals.

We must mention the birds of Tanzania, which are also incredibly diverse – there are over a thousand confirmed species! Tanzania can be considered a paradise for bird lovers. From huge masses of pink flamingoes to tiny birds of all possible colors to fierce birds of prey – your safari trip would be full of exciting bird sightings.

And if diving is your thing – Tanzania has lots to offer as well. The Indian Ocean off the coast of Tanzania or around Zanzibar islands is teeming with incredibly rich and colorful marine life. Of particular interest to divers are Pemba Island and Mafia Island.

Whichever safari trip you choose, the wildlife of Tanzania will give you memories that will last a lifetime!

Also read: 6 Most Beautiful National Parks in Malaysia You Need to Visit Right Away