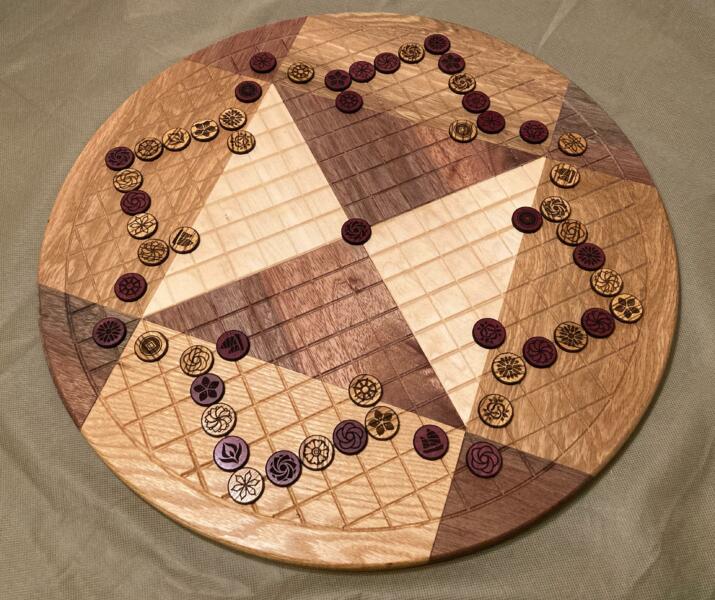 Pai Sho is a formerly-fantasy board game that appears in Avatar: The Last Airbender. Only the board and very few game pieces are seen in the series; no instructions are provided. To create a simple game that felt authentic to the program, fans of the show have worked hard to develop legitimate rules throughout the years.

The board for the game is round and has an 18×18 square grid with rounded corners. White and red are placed at the middle diamond’s corners, separated into four sections.

The remaining squares are yellow, except the four outside triangles, which are red. Tiles are laid out on the intersections, or points, of the board. On a Pai Sho board, there are 256 places.

Gameplay and Rules for Pai Sho

Two people typically play the game, but if you have enough tiles, you may play it with four. The players are seated across from one another at the small red triangles known as ports.

From your point of view, the closest port is the Home Port, the farthest port is the Foreign Port, and the ports to your left and right are known as the West Port and East Port, respectively. The Mid Port is the designation for the middle.

The rules created by fans were somewhat influenced by Ikebana, or the Japanese flower arranging technique. Ikebana is a floral art wherein the artists arrange flowers, branches, grasses, leaves, and other natural elements in a way that creates a good flow and shows deep respect for the living, the changing world of nature.

Three different varieties of red flower tiles, rose, chrysanthemum, and rhododendron, and three different types of white flower tiles, jasmine, lily, and white jade, make up Pai Sho. Some of the flowers harmonise with one another, while others create discord.

In addition, there are four non-flower tile types: rock, knotweed, wheel, and boat. Each symbolizes one of the four elements: earth, fire, air, and water. The white dragon, which stands for yin, and the white lotus, which stands for yang, are two more unique flower tiles. Each player is given a total of 54 tiles, including six of each flower type and three of each specialty flower and non-flower tile.

You can only utilize this power if you haven’t yet driven the boat. The White Lotus of the player who has contributed the fewest tiles to The Pot is said to be in bloom. The lotuses can harmonise with any other Flower in this stage. This game has a lot going for it at first, but after you figure it out, it delivers a lot of amusement and obstacles.

3. The Discords and Harmonies

The foundation of Pai Sho scoring is the use of harmonies and disharmonies. The flowers are a rose, a chrysanthemum, a rhododendron, a jasmine flower, a lily flower, and a white jade flower, in that order, starting at noon and proceeding clockwise.

Two components must be placed in a straight, unbroken line to establish harmony. A flower may achieve numerous harmonies simultaneously but only engages with the first flower in its line.

Unless a red flower produces a natural harmony in a red area harmonizing with a white flower in a white space, each piece awards a player one point. This unique situation earns two points.

A player can only create harmonies between their works, except in the Blooming White Lotus scenario. A component must move to develop harmony. When a disharmonious piece with one of the two harmonising pieces interferes with the harmony of an opponent, disharmonies are produced. The aggrieved player loses one point for creating discord or two points for upsetting a natural harmony.

4. The Gameplay of Pai Sho

The game begins with the flip of a coin. Six flowers, known as the Spring Flowers, are placed on the board to set it up. Each player can decide where three of the Spring Flowers go as placement is swapped between the two players. The winner can make the initial move or select the first piece on the board once all the details have been placed.

The identical six pieces must be placed precisely once by each player on their respective sides of the board. The red and white flowers can only begin in areas that match their flower color.

At the same time, spring flowers can only be put on a player’s side of the board. The Starting mentioned above Point guidelines do not apply to the Spring Flowers. As new tiles enter the game at various points, specific regulations apply.

Each tile has a distinct movement pattern and specific powers, as was previously mentioned. Only the White Dragon and Boat pieces can cross an adversary’s part, and no work is allowed to enter any ports.

One white jade flower tile print represents the project’s completion. The two individual coins placed together are not recognized as a single, printable solid by SketchUp.

Instead, Internal Face Edges was constantly identified by Solid Inspector, but because I was new to SketchUp, I had no idea what this meant. Thus all twelve tiles were made the same way, which was problematic.

Making a cross-sectional incision through the tile, removing the bases of both coins. Moreover, reassembling them is the step necessary to correct this problem. This will create a coin with two heads and a dependably solid center. Consider the circumstance as Hershey kisses.

The bases of two Hershey kisses cannot be joined to form a single item. But if you take the base from each Hershey kiss and combine them, you’ll obtain a single item with a standard edge. Since each kiss still has its distinct boundaries, the left and right may be distinguished. This is comparable to how the two coins were fused incorrectly.

Also read: What is Mahjong? How To Play Mahjong?