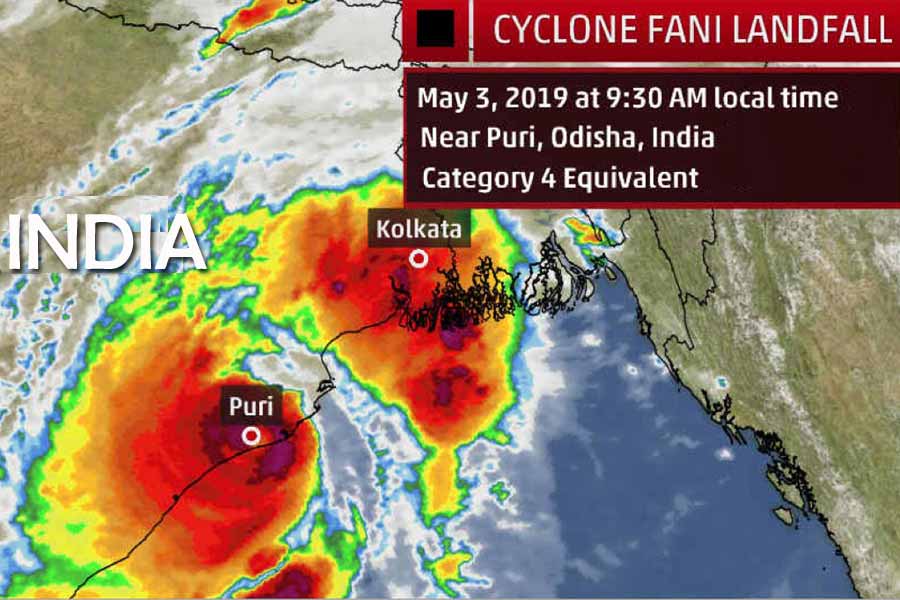 We came across with one of the strongest cyclone Fani which has devastated so many lives in Odisha till now. Nearly, 800,000 peoples across eastern India have been evacuated from their native places to somewhere else in order to save their life. According to the Indian weather service, extremely severe cyclonic storm Fani was expected to make landfall on Friday afternoon in Odisha state and across Northeast.

A state department official has told that 780,000 people were moved away to safer places overnight from at least 13 districts of Odisha.

Seeing the situation of the peoples, Odisha Special Relief Commissioner, Bishnupada Sethi has said that, “We are expecting more than a million people to move out of the danger zone in next 12 hours.”

Approximately 3,000 shelters in schools and government buildings have been set up to accommodate the sufferers of the storm.

More than 100,000 dry food packets will be dropped, said by the reporters. The storm which hits eastern India on Thursday is believed to be one of the biggest storms to happen in nearly 2 decades.

The cyclone has the wind speed of up to 118 miles per hour, with gust up to 125 mph which is equal to 3 to 4 hurricane. According to the meteorologist and weather forecasters,

Fani was expected to make a landfall near the Hindu holy town of Puri which is a major spot for attracting millions of tourists each year.

Due to the severity of the cyclone, more than 100 trains were cancelled in the two days before Thursday according to the official statement given by the Indian Railways. Authorities have also asked the tourists to leave the coastal areas and avoid travel anywhere as of now.

Special buses were also arranged to evacuate the tourists to get out from there. Apart from this, the Indian Navy was also put on high alert to handle the situation.

Forecasters have predicted a heavy rainfall on Friday in some places with some areas inundated by 8 inches of water. High tides are also been expected.

Rare view of #FaniCyclone from Odisha
May God save & protect everyone ? pic.twitter.com/cquzE4nZbB

The heavy storm has uprooted many trees, flattened crops and damages many homes as well as infrastructure. Also, the neighbouring coastal states of Andhra Pradesh have also been put on high alert which is home to some 70 million people.

We pray to god to protect the life of those who are suffering badly by the storm. People from Odisha are praying 24*7 and sharing videos on Twitter.

Chaos caused by the super cyclone #Fani is terrifying, My heart cries for odisha.#FaniCyclone pic.twitter.com/kFyDKKvt9h

#CycloneFani now #ExtremelySevereCyclone.Asking everyone to believe in the power of prayer.May #FaniCyclone pass without much damage. My Humble appeal Don’t Panic! Stay safe &help each other during #CycloneFani.With folded hands,I pray Lord to give us the strength to endure this. pic.twitter.com/RyDq3HDflv

Video clip of a roof being blown off at the undergraduate hostel in AIIMS Bhubaneshwar due to #CycloneFani #Fani #FaniCyclone #FaniUpdates pic.twitter.com/97c5ELQJ46

Impact of horrible #FaniCyclone at National Law University Odisha,Cuttack. The Academic block’s panels flown away in the ghastly wind. pic.twitter.com/0PMdxGvt5j