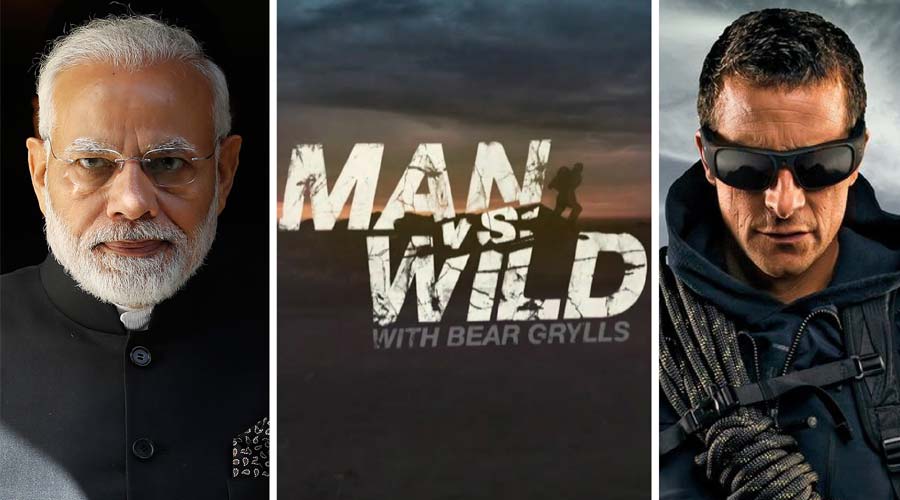 Aren’t you excited to watch Prime Minister Narendra Modi along with adventurer, Bear Grylls on his thrilling show ‘Man Vs Wild’?  He will be appearing on national television on Discovery Channel in a special episode on 12 August. The show will be purely based on adventurous journey throwing light on wildlife conservation and highlighting the issues concerning environmental change. Bear Grylls, himself has said that no man could be more perfect than him to shoot with.

As he shot the episode during February when Pulwama attack was going around. Most of them appraised Modi of his act while some of them also criticized which has led to many unpredictable jokes and memes.

Have a look at how Grylls took this to Twitter about his special appearance on the show which has created curiosity in the minds of netizens.

The video has been shot in Uttarakhand’s Jim Corbett when Grylls was there around February 14, when Pulwama attack happened. The government had cancelled all the bookings that day due to the reason PM Modi was about to visit the state.

Grylls posted on Twitter a teaser clip and wrote,

People across 180 countries will get to see the unknown side of PM @narendramodi as he ventures into Indian wilderness to create awareness about animal conservation & environmental change. Catch Man Vs Wild with PM Modi @DiscoveryIN on August 12 @ 9 pm. #PMModionDiscovery pic.twitter.com/MW2E6aMleE

You can also read: Here is The List of 8 Best Entertainment TV Shows That You Should Watch in 2019

The post got viral on the internet like fire in the bush. The tweet created by him is one of the most retweeted posts with more than 13k retweets and over 26k likes. After posting the video, Indians Twitterati has started the series of response over that.

PM Modi also released about the increment of India’s tiger count which has got doubled to 2,967. The target has been met around after 4 years.

A commitment fulfilled, that too well in advance!

It was decided to work towards doubling the tiger population by 2022 but India achieved this 4 years in advance!

India is proud to be home to almost 75% of the global tiger population. #InternationalTigerDay pic.twitter.com/t98f2RICE5

You can also read: Bigg Boss 13th Episode to Begin on September 29: Here’s All You Need to Know About the Show

In the video PM, Modi could be seen welcoming Grylls to India where he is also holding a weapon made up of bamboo and saying to him ‘welcome to India’.

You must be wondering why Bear Grylls shot his episode with PM Modi? To let you know, Bear Grylls wanted everyone to explore the unseen side of him maybe that’s why. Here are some of the reasons which will explain why Modi is one of the perfect choices for the show according to him.

1. In his Tweet, Bear Grylls has shared the trailer and pointed that with this episode people would get to know about the unseen avatar of PM Modi where he will be explaining about how to create awareness about animal conservation.

2. Modi keeps strong love for animals from cow to puppies and we all know that. So, no man could be better than him who better knows their pain.

3. Modi is a fearless man so he deserves to be on the show. He isn’t afraid of anything just like Bear Grylls.

4. Most of them suspected that how could he will survive on the show being a vegetarian. But he proved everyone wrong, he said ‘Na Khaunga Na Khane Dunga’ which shows his concern towards the welfare of insects.

So, all these points were fair enough to explain why he is a better choice than anyone else. Don’t forget to watch the special episode on 12 August on the Discovery channel.

You can also read: 6 Majestic Places to Explore in North East India