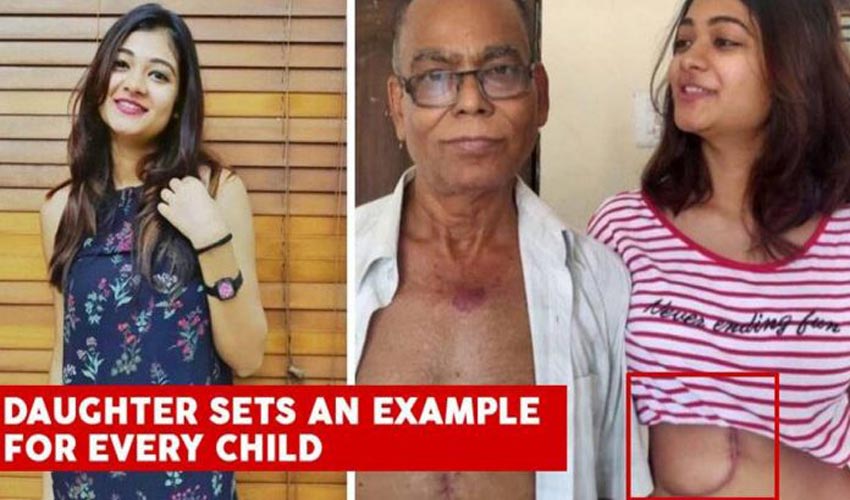 You might have heard many stories so far related to girls and women, where you would have come across situations where girls have saved someone’s life. But today we will talk about a bold and bravest girl who has saved the life of her father without taking care of anything,

not even worrying about the scars she will have, what pain she will go through and that is truly very motivating and inspiring to all of us. We should learn some lesson from her as she is giving major daughter father goals.

A girl named, Rakhi Dutta who is just 19 years old who donate her liver to father in order to save his life.

She is a motivation for all those useless children who are just useless for their parents as they don’t know how to care for them and treat them like she did without caring for anything.

Her dad had been suffering through an intense liver issue and had been in a perilous, life-affecting circumstance. Undoubtedly, this girl has done everything that she was able to do to save his father’s life. She took every pain to get the best medicines for her father in every possible way she could.

Rakhi Dutta, a 19 year donated 65% of her liver to her father who was suffering from a serious liver ailment, without even thinking of the scars, pain or any future threat.
A daughter’s love for her father is always very special.
An answer to all who think daughters are useless.. pic.twitter.com/BMbRaMhM88

According to the sources, her dad has been treated by many specialists but none of the treatment worked on him then after that Rakhi and her sister have decided to take their dad to AIG medical clinic and it was then Rakhi has decided to take a strong and daring decision to save her father’s life by donating 65% of her liver to her dad as a liver transplant which was proposed by one of the doctor’s.

Thank you sir for this news about father and sister.. Rakhi is my sister. M really proud.. @hvgoenka

We must appreciate her strong and bold decision that she decided to took to save her father’s life. Her benevolent and bold move has gone viral on social media. She has become a true inspiration among netizens who are praising her for the bold move she had taken by sharing her story on the social platforms.

The little girl has donated a piece of her liver to her dad to spare his life. There is a post on her which was shared by the specialist itself, he said:

Bhushan stated, “#BRAVEDAUGHTER: There are some REAL LIFE HEROES who don’t put stock in words like LUCK, FEAR and IMPOSSIBLE. When individuals state that DAUGHTERS are pointless she is a response to them.

A young lady whom I don’t know by and by however then for me, she is a HERO who experienced LIVER TRANSPLANT and spared the life of her father. Proud of you young lady and there is such a long way to go from individuals like her.”

Daughters are priceless ?. I am reminded of this thing every time I come home from office my 1y old is so excited to see me back!

Daughters are the best .my teenager is my strength ,she is like the second parent to my autistic son..I really thank God that my first one is a daughter. She brings empathy responsibility loyalty and such love in my house. Here is a shout out to daughters like Rakhi

It’s the beginning of a lifetime of happiness. Mine is 19 now, but she remains the same little bundle curled up in my arms when she was born 🙂