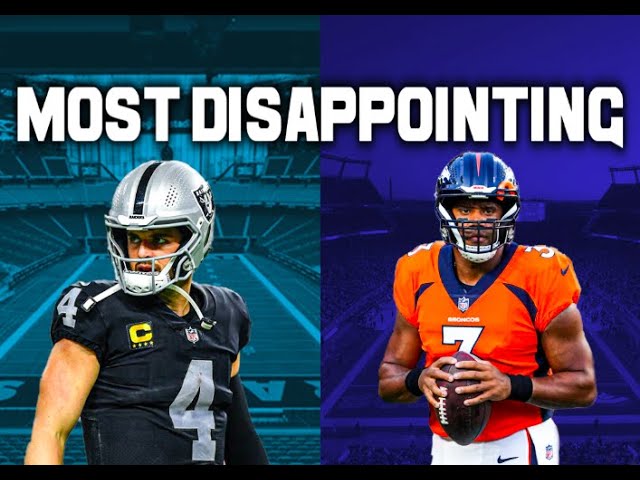 It was the end of the road for 18 of the 32 NFL teams following week 18 of the regular season in the league. They now have the long wait until September to make up for their disappointing campaigns.

Here is a look at the three franchises who will feel they have underperformed in the 2022/23 season and will be reflecting on why it went so wrong for them.

As the defending Super Bowl champions, a lot was expected from the Los Angeles Rams again this season. Their roster was not too dissimilar to the one which gave the franchise its first Vince Lombardi Trophy in 22 years when they defeated the Cincinnati Bengals at Super Bowl LVI.

The Rams were hammered 31-10 by the Buffalo Bills in week one and from there they were never able to recover, as they struggled to find their best form regularly enough. The San Francisco 49ers did the double over them early in the campaign, which meant they had a mountain to climb to close the gap on their divisional rivals.

After missing out on the playoffs, the only chance the NFC West will remain in the NFL Championships now is if the 49ers, who have NFL odds of +500, win the Super Bowl this season.

The former Super Bowl champions have some big decisions to make in the offseason — they must decide whether they stick with Matthew Stafford at QB, and there are also doubts over whether three-time NFL Defensive Player of the Year Aaron Donald will return to Los Angeles.

It was just the third time in 14 years that the Green Bay Packers finished the regular season below .500. Their 8-9 record brought an end to their three-year run with the NFC North title, and it meant they missed out on the playoffs.

Green Bay began the season as one of the strongest contenders for the Vince Lombardi Trophy with quarterback Aaron Rodgers coming off two consecutive seasons as the NFL MVP. However, losing his leading receiver Davante Adams proved to be an even bigger blow than anticipated.

A five-game losing sequence from week five to week nine was where the damage was done for the Packers. They were beaten by the New York Giants, New York Jets, Washington Commanders, Buffalo Bills, and Detroit Lions.

Victories over the Dallas Cowboys, Miami Dolphins, and Minnesota Vikings gave Green Bay fans something to cheer about near the end of the campaign, but it was not enough to qualify for the postseason.

Going into the 2022/23 campaign, the Tennessee Titans were on the back of six seasons with a winning record. They have been one of the most consistent teams in the NFL over the last decade, with playoff appearances in four of the last five years.

Tennessee was in control of the AFC South for most of the season, but they let their grip slip in the latter stages of the year, losing their final seven matches. Only the Chicago Bears had a longer losing streak with 10 consecutive losses. With five straight victories, the Jacksonville Jaguars hit top form just in time to seal the title away from the Titans.

Derrick Henry has 17 carries at the half. 👀#Titans pic.twitter.com/u9hcfrbdzF

Injuries have proved costly for Mike Vrabel’s side over the last couple of years. However, their biggest threat in the team, powerful running back Derrick Henry, played 16 games in 2022. They must find a way of snapping out of their losing record when they return to action later this year.

The 2023/24 NFL season begins on September 7 and each of the three franchises could look very different on and off the gridiron.

Also read: Zach Green, an Ex NFL Player Who Turned into a Most Entertaining Streamer