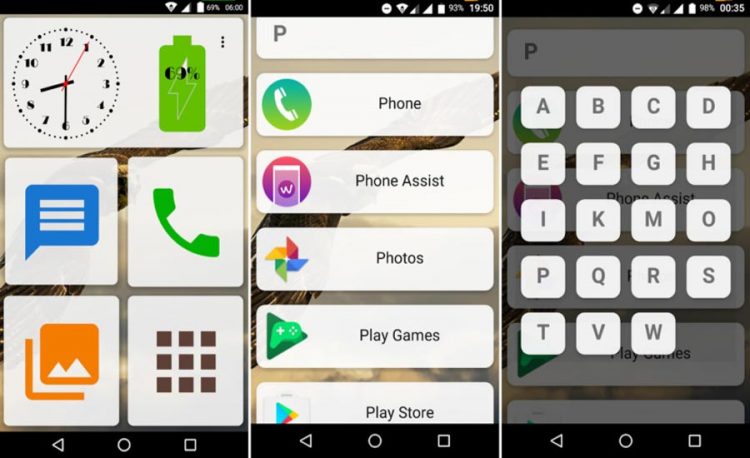 It is hard for Senior and Visually-Impaired Users to use the normal Android launchers. They will not be able to access the features quickly. So there are android launchers available, especially for the seniors. These simple senior launchers can make it easy for them. Therefore here are the six Android Launchers for seniors and visually impaired people. Also, these are the launchers your parents and grandparents will need. It can make their life easier.

So why not have a look at the senior launchers given below and recommend the one that your senior relations will love to use.

The Big launcher is suitable for people with eye-sight issues. Also, it is good for senior citizens. It simplifies the functions of the Android phone. It uses a plain background and also wallpaper. There is a dark mode as well as a light mode in this launcher. Further, the app’s interface is easy to use. There are phone, SMS, SOS, gallery and more functions in the launcher. The battery level information is also available at the top. The time and the current date are also present on the home page.

This is a free android launcher app. It is a great app for elderly people. Clearly, it has the best user interface. Some of the extra features of this app are large fonts and icons. This will allow visually impaired people to operate easily. There is a control centre that makes it easy to find the settings. Further the weather settings, safety locks are also available. It is also easy for the elderly to personalise the phone according to their preference. So they cannot wrongly uninstall the apps or move them.

It is one of the well-known Android launchers. This senior launcher has a great design. It has many shortcuts so it is easy for them to access the texts, phone and other apps. Some of the important icons like the emergency and alarm are on the home screen. So if there is an accident they can contact others quickly without wasting time. Further, there are some additional features too. There are options to set up the medication reminders. It is a free launcher but for extra features, you have to pay.

The Simple Mode app launcher is also one of the best apps which the elderly can use. It takes away all the complex features in the Android phone and makes it easy to use. You will get the apps in semi-transparent blocks. Also, there are themes in the app that can be changed according to preference. Reading the information in this launcher is also simple. If you want to delete any of the apps in the launcher then the uninstall options are nearby.

So doing everything is easy in this launcher. The favourite contacts can be added to the favourite list. It is simple for the elderly and visually impaired people to find contacts.

This is another simple launcher for Android. There is a default home screen in the launcher that helps the elderly user to quickly make calls, use the camera, and send messages and more. Also, they can access the alarm clock, Wi-Fi connections with ease. The launcher will make the fonts look larger and clearer. Further, there is an SOS list in the launcher which will be a great help in case of emergency. This app is free but also comes with in-app purchases.

It has a video tutorial feature that can speed up the work. There is a medical reminder function in the launcher that can help elderly users to note down their medicinal prescriptions. It does not have any ads.

These are the six best Android launcher apps for seniors and visually impaired people. You can help your elderly family members to benefit from these apps.

Also read: The Top Benefits of Assisted Living For Seniors

Connect almost anything to the PSB Alpha iQ Streaming Speakers