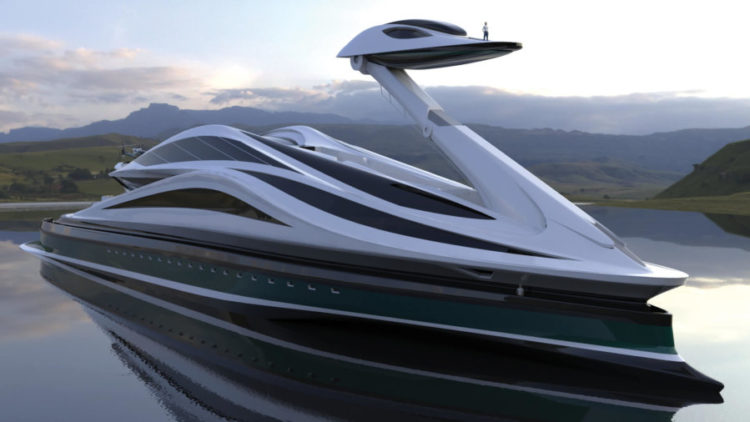 Lazzarini Design Studio has unveiled a zoomorphic yacht named Avanguardia. They have created a mega yacht in the shape of a swan. Italian designer Pierpaolo Lazzarini came up with an ambitious and imaginative proposal for the 137-meter yacht with all the luxurious features. Such features that he managed to champion in that beauty are a detachable cockpit, an adjustable bridge. Along with that, he also designed dive decks for visitors to enjoy the mesmerizing sea view. Hence, one can say that he has created an ethereal beauty.

The Lo And Behold

Avanguardia has been added to the avant-garde addition of Lazzarini’s pieces. The design of the yacht resembles the body of the swan. Moreover, not only the design, but the name signifies class and royalty as well. The meaning behind the name of the yacht translates to “vanguard” in English.

The structure of Avanguardia

As we have already mentioned, the swan-shaped yacht ‘Avanguardia’ follows a zoomorphic pattern. It includes an extendable bridge. Meanwhile, the head of the swan serves as a control deck. It is the place where the sailors will control the yacht. Many believe that it is an unconscious influence from a 1970s Japanese manga.

One can adjust the position of the tower cockpit during the sail. They can lower the cockpit according to their desire in the middle of the yacht. Or, they can leave it be just as a swan tends to do so. The fact that it lies similar to how the swan buries its neck in between its wings makes it appear graceful.

This aspect rather extends the length of the yacht to 157 meters when the neck is down. Moreover, they can also disconnect the cockpit from the neck. And, additionally, they can use it as an auxiliary 16-meter boat. With the aspect of adjusting the control tower, the view becomes more breathtaking.

More Ado on The Decks And Additional Automotive

The front deck of the Avanguardia includes a personal port. Here they have placed two jet capsules. Sources have revealed that a team of designers and automotive engineers have designed them. One can even connect the mini-jet cruisers to the main structure. Therefore, it will serve as an extra thrust for the structure itself.

Meanwhile, we have the electric jet capsules as well. These capsules are normally charged by being with the main yacht body itself. So, in this case, the mega yacht will become the extra control tower. Once they detach the head, it will serve as an extra tower. Further, the rear deck has a personal port.

According to the sources, up to 60 passengers can take a cruise on the mega yacht. They can easily and comfortably enjoy the five main decks. The yacht has two fully electric side engines. Along with that, it also has a central MTU Rolls-Royce jet engine. The engine makes it possible to drive the yacht to maximum speed.

The maximum estimated cruising speed of the yacht should be around 18 knots. When asked about his masterpiece, Lazzarini said, “Avanguardia is just a stylistic exercise that could become reality with a client able to invest $500.000.000 for the construction”.

Apart from those, the inventive design of the yacht also includes a garage. With it comes a helipad. So, one can say that Lazzarini has taken the concept of the luxury yacht a notch higher.

Avanguardia has become the next-level yacht that has taken the concept of luxury and comfort to the next level.