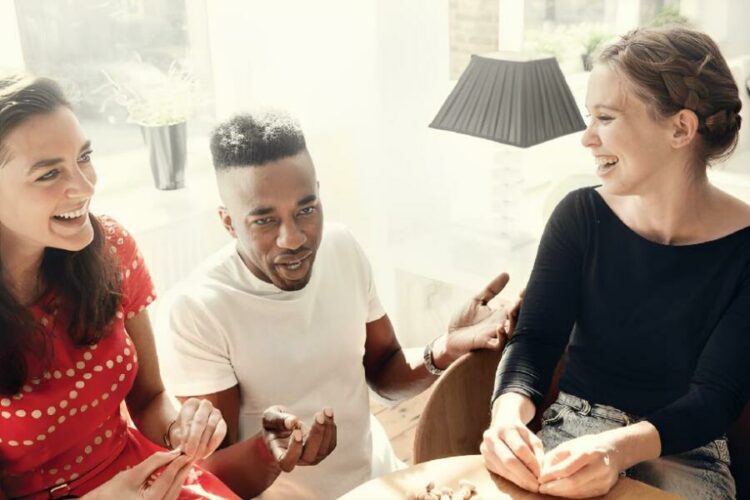 Nothing is more annoying than trying to be humorous while watching someone else effortlessly elicit waves of laughter from a captive audience. The good news is that while some individuals have a natural sense of humor. It is possible to think of a witty thing to say at any time.

There are hints, techniques, and even scripts that remove the element of surprise when it comes to learning how to make people laugh. So continue reading to learn everything you need to know about delivering jokes and hilarious tales. You’ll soon be laughing with your family, friends, and coworkers.

How to Be Funny?

The first thing that generally springs to mind when you think of hilarious people is talking: your favorite comic performing a stand-up routine. In their Netflix special or the funniest employee at work regaling his coworkers with tales of his weekend. However, considering humor in that context glosses over two crucial aspects of comedy.

The first is that speaking is far less important for humor than listening. The funniest individuals are great observers of their environment and attentive to even the most minute, trivial facts. They pick up on the type of information that most people skip over on the first pass. But immediately notice when it is brought up again.

You don’t necessarily want to announce your finding as soon as you make it, just like a poker player who notices a tell in her opponent across the table. The key to being hilarious in conversation is to pick your moments, read the crowd. Also, strike a balance between speaking and listening.

Here are some pointers to help you on your journey toward becoming funnier in both your personal and professional life:

A joke is a made-up narrative that builds to a punchline. If the punch line doesn’t work, you come across as foolish. People who are particularly hilarious share tales with comedy in them rather than making jokes. It doesn’t matter if some people don’t think a story is entertaining since it has a deeper meaning. Even great if there is laughter.

Set Yourself up for Success

You have to place yourself in situations where it’s feasible to be funnier and then make an effort if you want to be funnier. Make some jokes the next time you’re at a social event. Don’t give up, even if it could seem weird, and you might completely fail. With continued practice, you’ll develop a rapier wit ready to crack a joke at the first sign of indignity.

Put Your Phone Away

When you spend time gazing at your phone or listening to music instead of taking in your environment. You won’t have much material to draw from if you want to funnier. As your conversational style starts to become more humorous.

Observational comedy is an excellent start since it depends less on clever language. Moreover, well-crafted jokes and more on having an intriguing viewpoint on your daily experiences. So, that does imply that you must put the phone down and focus on reality.

Hilarious people don’t rely on their memory to remember everything they find amusing. Great comics used to have notebooks to record hilarious ideas. Also, observations and scrapbooks for news clippings that they found funny. These days, your smartphone makes it simple to accomplish that.

Create an audio note if you have a humorous idea. Save the URL to a hilarious article you read in your bookmarks. Your life in this absurd universe is much funnier. Accepting that reality is a blessing because it equips you with all you need to create humour and tales daily. You only need to note them and then inform someone.

But no matter how much time has gone by, if you never say that the time you got locked out of your house. Moreover, without your trousers on was humorous, it will always remember as a tragedy. Start by making some fun of yourself if you want to be funnier.

Although you shouldn’t tell jokes to everyone you encounter, it’s useful to keep a couple in your back pocket just in case the chance arises. A few different tricks should also learn because what is suitable for a bar not appropriate for a PTA meeting.

The most successful comedians have ultimately mastered finding their unique voice. Be yourself and have faith that you have a glimmer of humor inside.

At best, you’ll come off as desperate if you try too hard to be amusing; at worst. You’ll sound like someone doing a Borat imitation at a dinner party. People will appreciate it more if you’re authentic, and it will be a lot simpler to make them laugh if you’re at ease and self-assured.

Do a punch-up to be funnier in a speech or presentation rather than striving to create a comic masterpiece from the start. A critical stage in screenwriting is the punch-up, where you go over a finished draught and make a few minor edits.

It will be simpler to go back and find places to tighten things up and add a few jokes after you have the structure of your speech down. After all, getting anything right the second time around is considerably simpler.

Call Back in The Conversation

Both surprise and repetition are beloved by audiences. You’ve succeeded in doing both by spotting a link between two points in the discussion. They missed and by repeating what they had heard if you can make a decent callback in conversation to something stated before.

To recall what is stated during a discussion, pay close attention to what the other person is saying. A running joke that everyone can create with little effort once established. It can start by bringing up anything that happened earlier in the conversation or that day.

Being hilarious isn’t always seen as the most important quality in the job. In the workplace, we typically keep our humour out of concern for upsetting a coworker or, worse still, our boss. That being the case, always taking oneself too seriously can raise stress at work. If humour is valued at work, it can help reduce tension and stress, two major inhibitors to creativity.

Also read: How to Respond to What’s Up: Great, Funny, and Clever Replies!