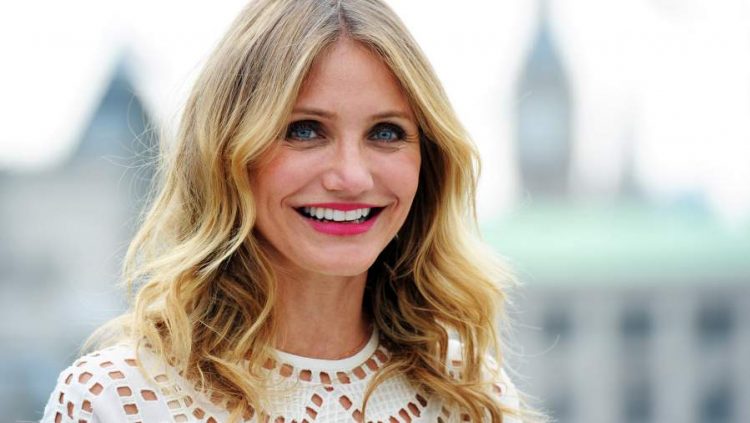 Cameron Michelle Díaz is an American film actress, model, and author. Diaz was born and raised in San Diego, California, the daughter of Emilio Díaz, a Cuban-American father who worked as a foreman for an oil company, and mother Billie Early, an exporting agent whose ancestry includes English, German, and Native American. She attended Long Beach Polytechnic High School.

She landed a contract with the prestigious Elle modelling agency when she was only 16. After graduating from High School she went to work in Japan, there meeting video director Carlo de la Torre. On her return to America, she moved in with him. For the next few years, her modelling took her ’round the world, working for contracts with major companies. At the age of 21, she auditioned for a part in the Jim Carrey movie The Mask.

Over the next three years she honed her acting skills in low budget, independent films such as The Last Supper (1995), Feeling Minnesota (1996), and She’s The One (1996).

Cameron returned to the mainstream in the romantic comedy in My Best Friend’s Wedding (1997) with Julia Roberts. Her lead role in the massive crude comedy hit There’s Something About Mary (1998). The film grossed $369.8 million worldwide and brought her genuine star status.

Díaz then returned to independent film with the quirky Being John Malkovich (1999), which earned her Best Supporting Actress nominations at the Golden Globes, the BAFTA Awards, and the SAG Awards. That year she also appeared in Oliver Stone’s Any Given Sunday.

She then went on her biggest box-office tear. In 2000 she starred in the TV-to-film adaptation of Charlie’s Angels that made $264.1 million worldwide and voiced a character in Shrek which made $484.4 million worldwide. In 2001 she starred in Cameron Crowe’s Vanilla Sky which made $203.3 worldwide and saw her nominated for Support Actress honors at the Golden Globes, the SAG Awards and the AFI Awards. She won Best Supporting Actress honors for the role at the Chicago Film Critics Association Awards and the Boston Society of Film Critics Awards. In January 2002, she became only the 2nd actress to ever be paid $20 million for a role (Julia Roberts was the first). when she signed to be paid that much for Charlie’s Angels: Full Throttle.

Yet things began to sour for Diaz after joining the $20 million club. In 2002 she saw her chick-flick The Sweetest Thing tank at the box office. She then appeared in Gangs of New York. Despite of having the honor of appearing in a film directed by Martin Scorsese and appearing in a film that was nominated for many Academy Awards, her performance wasn’t considered a highlight of the film. In 2003 the sequel Charlie’s Angels: Full Throttle underperformed at the box office. Things looked up a bit as she was paid $10 million for a little over a weeks worth of voice work on Shrek 2, which smashed box-office records, grossing $920.6 million worldwide in total.

Diaz continues to struggle to appear in a successful film in which she makes a live-action appearance. After having avoided smaller films in the past couple of years, she starred in Curtis Hanson’s In Her Shoes, based on the Jennifer Weiner novel. While the film may have restored her good graces with some critics, it quickly fizzled out at the box office.

Covers and Featured in Magazines