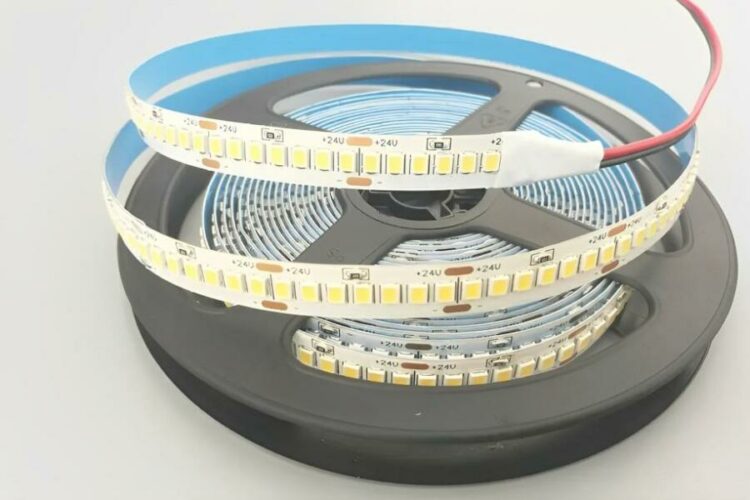 With a pair of scissors, LED strip lights may be quickly and easily cut apart. Copper dots are attached to the end of each LED. The LEDs are fully functional if you cut in between the dots. The LEDs can then be connected to a power supply via a fast connector or by soldering. All LEDs should light up in a vibrant pattern if they are all connected properly.

There is only one long strip of LEDs. LEDs can be cut off one at a time as needed, but the cuts must be made at certain locations for them to function effectively. Find out your LED strip’s length before any lights are cut off.

On the LED strip’s back, search for two copper spots. Each light on the strip is connected to the one after it on the strip by a copper dot. Between the copper dots, you’ll notice a dotted cut line. Select the line closest to the LED measurement you took previously.

It can be done with a pair of scissors. While keeping the lights steady, cut along the dotted line. The copper dots should be cut through. To prevent the LEDs from being harmed, precisely align the cut.

Securing LEDs to A Quick Connector

Quick connectors make it simple to complete the electrical circuit and can be bought with LED lights. A + and – will be printed on the LED’s back. The Connector’s black and red wires should align with the – and +, respectively.

Take one hand and hold the connector. At the very end, you will see a small plastic bar that is often black. To unlock the connector, pull this bar forward. The connector is delicate, so take care.

Just enough backing removal will reveal the LED’s copper terminals. You will need to cut the terminals’ plastic covering if your LEDs don’t have this backing.

To hold the LED, pull the plastic bar back onto it. When you release the LED, it should remain stationary. This shields the connection from harm as well.

Choose a terminal wire connector from a hardware store. After connecting the wires to the connector, tighten the screws by turning the connector in a clockwise direction. Connect the other end of the terminal’s power supply cord.

Metal solder wire is held over the LED with a heated soldering iron. Put the copper dots on the solder wire after it has melted. Make little puddles of solder that completely round the copper using the appropriate amount of solder.

Purchase a plastic end cap from a hardware shop. To cut the cap, pierce the closed end with a knife or box cutter. To make the opening large enough to accommodate wires, scrape away the plastic.

You must calculate the required length of wire to connect the LED to your power source. Two black and red wires that fit the LED’s terminals are required. Leave a small amount of excess length on each wire, roughly ½ in 1.3 cm.

Remove the casing from the wire ends, about ½ in 1.3 cm long. To cut through the wire casing, squeeze the handles firmly.

Focus on one wire at once. The frayed strands can be gathered together by twisting the wire’s end. Reheat the soldering iron, then melt the solder onto the wire that is exposed. For every wire, repeat this.

The other end of the wires should be plugged into the power supply. Before testing the electrical circuit, the wire ends may need to be twisted and covered with a shrink tube or an end cap.

Get a new plastic end cap. Silicone glue should be poured into it halfway. Then, press the cap onto the LED strip’s free end. Make sure the LED can touch the back of the cap.

The power source’s switch must be turned. The LED lights should all activate by now. The wires might not be properly positioned if they don’t. Make sure the colored wires connect to the proper LED terminal. Additionally, ensure that the wires are firmly soldered to the LED.

You got it, then! Any installation, no matter how big or little can have LED strip lights customized to meet its needs.

They quickly are overtaking other types of LED lights in popularity, which is understandable.

If you’re still uneasy, you can have a professional cut your LED strip lights, but if you stick to the above-mentioned instructions, there’s nothing to be afraid of.

Also read: 5 Reasons You Should Get LED Parkinglot Lights

The Rise of The TikTok Eye Docs

Tips for Stamping Out Job-Related Anxiety

What is The USPS Email Address: How to Contact The United States Postal Service?

Know How to Check for Trojan and Fix It