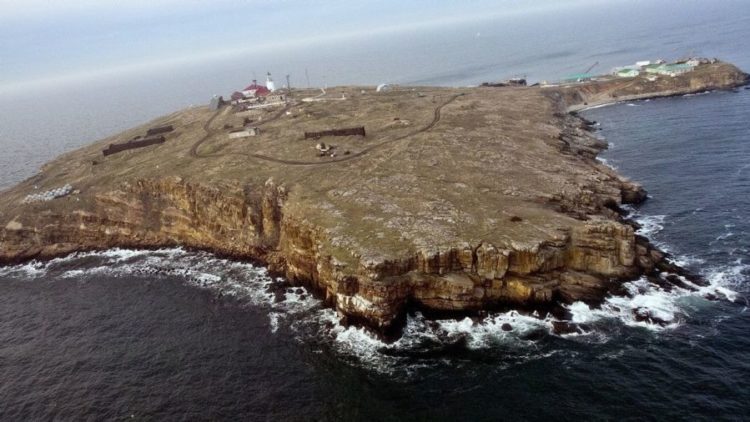 Many of you might be surprised to see the title; however, there is a place called Snake Island. Yes, it is a place with just 46 acres of rock and grass with no fresh water, and don’t worry, there are no snakes either. However, the Snake Island in the Black Seas has taken on a totemic significance in the conflict between Ukraine and Russia.

At the same time, people know this isle as Zmiinyi Ostriv in Ukrainian. It lies around 30 miles, 48 km off the coast of Ukraine, and is close to the sea lanes leading to the Bosphorus and Mediterranean. Moreover, Moscow has never laid a claim on Snake Island as per the sources. This is because it is a long way from any part of the Russian mainland.

In fact, it is over 180 miles from Crimea, which Russia Annexed in 2014. Therefore, technically even if Russia wants, it can never claim it as its own. So would you like to know more about this mysterious island? Let us share with you some of the interesting aspects of this island.

Know Some Of The Interesting Details About Snake Island

Since you are reading this article, it is evident that you are eager to know more about this mysterious piece of land in Ukraine. Snake Island, Ukraine, is also known as Serpent Island or Zmiinyi Island. As we mentioned earlier, it is an island belonging to Ukraine located in the Black Sea, near the Danube Delta. Presently, this speck of land is playing an outsized role in Russia’s war on Ukraine.

Many of you might be hearing about it for the first time; however, it has been there since classical antiquity. In fact, during that era, there was a Greek temple to Achilles. As per the reports, the island had around 30 people in 2012. There was also a village, Bile, that the people founded in 2007. The primary purpose of establishing this village was to consolidate the island’s status as an inhabited place.

This happened during the period in which the island was part of a border dispute between Romania and Ukraine from 2004 to 2009. Moreover, in 2009 the International Court of Justice had delineated the territorial limits of the continental shelf around this island. This had provided Romania with 80% of the disputed maritime territory. However, on February 24, 2022. Two Russian navy warships attacked and captured Snake Island. So since then, Ukraine has dropped bombs on the island several times. Therefore, presently it is a place of political disputes.

Why Did The Russians Think That They Can Easily Claim It?

So as we mentioned, you can well understand that legally the Russians can’t claim the Snake Island. However, history is damned because it has strategic value, and the Russians clearly thought it would be easy to lay claims. Ukraine was not in the dark about its vulnerability even before the conflict.

Last year, Ukrainian President Volodymyr Zelensky flew to this island. Even though there were no voters here, he wanted to emphasize that he visits places irrespective of voters. “This island, like the rest of our territory, is Ukrainian land, and we will defend it with all our might,” he said.

Furthermore, the Russians went for Snake Island on the very first day of the war in late February. This was when the famous exchange between its Ukrainian defenders and the Russian navy transpired. Moreover, the Ukrainian navy gave a fitting reply to the Russians when they ordered them to surrender. “Russian warship get lost,” came the now legendary response, although in far cruder language. This later became a motif of Ukrainian resistance. However, the Russians seized the island, but weeks later, the Moskva, the Russian flagship, sank.

Needless to say, losing the Moskva was a big blow to the Russians. This meant that their supply ships to the island now had minimal protection. However, if they can consolidate their position, they can again dominate a large part of the Black Sea.

Why Can Snake Island Be A Threat To Ukraine Along With Its Neighbors & Nato?

Many of you can already figure out what we are trying to refer to here. So if the Russians come back with a more potent force, it will indeed be dangerous for Ukraine both strategically and economically. So the Ukrainians have already had to close their port at Odesa. This has suspended their vital grain exports. However, the President fears that the Russians can use the island as a second frontline.

This is because if the Russians succeed in installing long-range air defense systems, they can defend their squadron. In fact, in this way, they can also reach the Ukrainian coastline. Moreover, this will also give Russian troops the chance to break into Transnistria. This is Moldova’s breakaway territory under Russian control. Since this is quite close to Ukraine, it is the best way to attack them.

Have A Look At What The Analysts Are Saying

Even though Snake Island is not much longer and is just 45 km, UK naval analyst Jonathan Bentham believes that a Russian S-400 air missile system on the island can be a “big game-changer.” In fact, if Russia plans on such a thing, not only will Ukraine be in trouble but all the nearby countries and Nato as well.

Therefore, this is indeed very important for the Romanian government and people, along with the entire alliance. If Russia wants, they can easily destroy cities and military capability east of their territory. They have ample opportunities.

So Nato reinforced Romania’s borders from the start of the war by sending in Belgian and French forces. However, there are major economic risks as well for Romania. Since Snake Island lies close to the mouth of the River Danube, it delineates Romania’s border with Ukraine. Moreover, Romania’s Black Sea port of Constanta is also quite close. Therefore, they take in container ships that can no longer sail to Odesa.

At the same time, another military analyst says that troops on Snake Island could be in a position to control traffic into the north-western Black Sea and Danube delta. In fact, if there is a military base there, it would be possible to block ships there. Also, Romania’s Euro-Atlantic Resilience Centre believes that Russia may decide to annex the island and control as many Black Sea shipping routes as possible.

Snake Island is not just of strategic use because this part of the Black Sea is rich in hydrocarbon resources. Therefore, any country that can control a major part of it will possess petroleum and gas reserves. It may seem like a small clump of rock with little apparent value; however, its fate is a major element of Russia’s war. So naturally, both the nations will want to have control of the island as much as possible.