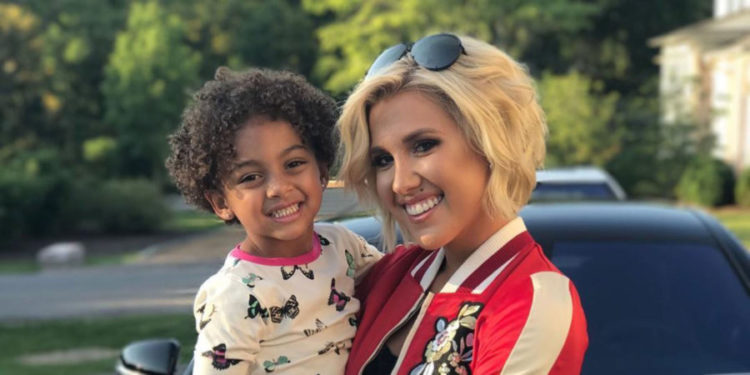 Chloe Chrisley is the daughter of a very popular American TV reality Star, Kyle Chrisley, and his ex, Angela Johnson. In fact, fans also know the beautiful star kid from the reality show ‘Chrisley Knows Best’. Whenever she makes an appearance in the show, she surely steals the spotlight. However, her presence seems to have an air of mystery around. Under the smile, there’s a deep story as well. So, if you want to learn more about her life, then give this article a read.

Chloe Chrisley was born in the year 2012, on 10th November in South Carolina, The U.S. Therefore, currently she is only 8 years old. It’s really amazing how quickly she has grown up. Her fans, who have been seeing her in the show, would know how little she was when she made an appearance. Moreover, her zodiac sign is Scorpio and she holds American citizenship. As for Chloe Chrisley’s parents, her father is the American TV reality star Kyle Chrisley and her mother is Angela Victoria Johnson.

Chloe’s mom Angela is one of the prolific writers who won awards. The trio appeared in the reality show ‘Chrisley knows Best’. However, there’s a reality hiding inside the illusion. Chloe’s life is fraught with dramas, especially when it comes to her parents. Due to some reasons, the duo settled for divorce. So, if you are curious to know what happened that led them to take such a decision, go through the following info.

Chloe didn’t have the best of childhood at all. In fact, Chloe Chrisley’s family, especially her parents do not share good relations at all.  We know that her parents took a divorce for some reason. Their relationship was full of drama.

Moreover, Kyle also had a past with drug abuse as well. That’s why the main cause of his separation from Angela was due to drug addiction. It’s sad because Chloe’s parent’s relationship lasted only moments after her birth.

Who Has the Custody of Chloe Chrisley Now?

As per the sources, police arrested Kyle based on the charges of physical assault on his wife. Therefore, Todd, Chloe’s grandfather, and mom had her custody. However, in the year 2016, her mother Angela was arrested for claiming that Chloe is dependent to defraud Medicaid and food stamps. Therefore, currently, his grandfather and grandmother, Julie Chrisley has her full custody.

Talking about Kyle, Todd said, “Kyle is bipolar, and normally people that are bipolar, they seek out a way to self-medicate, which is what Kyle has done since he’s been young”. Therefore, he means to say that Kyle is unfit as a dad.

Chloe Chrisley’s Relationship with Her Grandparents

Due to some issues, Chloe didn’t appear in a few seasons of ‘Chrisley Knows Best’. Though Todd shared some factors, it boils down to the fact that Todd didn’t want to pay Kyle for Chloe’s appearance in the show. In other words, he didn’t want to involve his granddaughter in the family drama anymore.

In the end, she has found her new home. Moreover, it seems like she is quite happy. Despite the fact that she couldn’t receive her parents’ love in her childhood, her situation is better than before, for sure.

You may also like: Everything You Need To Know About British Billionaire’s Daughter Chloe Green