Chris Paul’s Anger After An Incident Involving His Wife & Mother During The Game 4 Vs. Mavericks: What Happened? 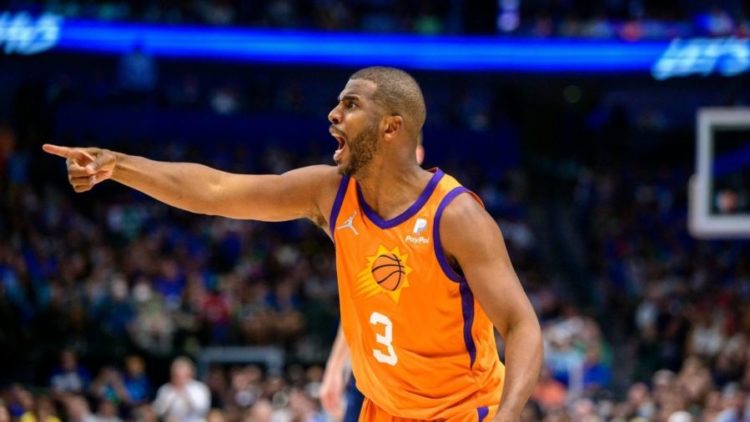 The game 4 against the Mavericks wasn’t quite an ideal day for Chris Paul as his anger took the better of him. In other words, it was an ugly afternoon for Chris, the veteran Point guard of the Phoenix Suns. Moreover, the game 4 of the series between the Phoenix Suns and Dallas Mavericks on Sunday was a rollercoaster ride for sure. Chris Paul recorded five points in only 23 minutes before fouling out of the match. However, Dallas came out on top with a 111-101 victory and they evened the series 2-2.

But, the titular story occurred outside of the court.

According to the sources, a fan harassed Chris’ family physically during the game. Needless to say, this incident angered Paul and he addressed the incident on social media after the game.

Wanna fine players for saying stuff to the fans but the fans can put they hands on our families….fuck that!!

So, as we mentioned earlier, Chris Paul had a rough outing against Dallas Mavericks on Sunday night. In fact, he got himself into a serious foul by picking up his fourth one just before the buzzer hit halftime. According to Luka Doncic, the Mavericks guard, the fact that the Suns guard was playing aggressively with three first-half fouls surprised him. In fact, Paul brushed Doncic and sent him tumbling as the referees gave Paul his 4th foul.

Doncic said, “I saw he was going for the rebound and I was surprised.” He added that Paul asked him if he had pushed him that hard. In reply, Doncic said, “No, not that hard…but it was a smart play.” to which Paul replied affirmatively.

Paul himself knows that he played quite recklessly despite knowing pretty well that he had three fouls within the first half. However, it becomes quite difficult for a player to control their emotion and composure. So, Chris Paul said, “I’ve got to look back at it… I mean, I can’t put myself in the situation to give them the ability to do that. I’ve just got to look at myself and figure out how to do better.”

Chris ended the game with four more fouls and finished with only five points on 2-4 shooting. According to the game stats, he fouled out with around 8:58 mins remaining in the match. The next match against the opposition is on Tuesday, and he’d try to correct his mistakes.

The Incident Involving The Harassment Of His Family

According to ESPN, lots of family members of Paul sat in a section near the bench of the Phoenix Suns during the Sunday afternoon match. Moreover, the sources tell us that someone pushed Paul’s wife as well as his mother.

Chris Paul yells "I'LL SEE YOU LATER!" at a young fan that allegedly got physical with Paul's wife & mother during GM4.

CP3: "Wanna fine players for saying stuff to the fans but the fans can put they hands on our families…f**k that!"pic.twitter.com/ZwdPHZC78b

There was a video that showed Paul screaming at a young guy with Mavericks Jersey. Whether it’s that fan who pushed Pauk’s wife or not is not clear. However, Chris was telling the man with an irate face that he would see him later, repeatedly.

The Sports Anchor at WFAA, Mike Leslie tweeted a video of Chris on this matter. So, Chris said, “He put his hands on my mom…He put his hands on my mom.” Well, after the match on Sunday, Paul decided to post about this whole incident on Twitter. He made a comment about this whole matter and said, “Wanna fine players for saying stuff to the fans but the fans can put their hands on our families… F**** That!”.

“He put his hands on my mom” it appears CP3 is saying and further puts this tweet into context. pic.twitter.com/VbFt8AyPDX https://t.co/BJ9gm0ImQr

What Did Mavericks Say?

After this eventful incident, the authorities removed the fan from the Arena. As for Mavericks, they have put out a statement after the match against Pheonix Suns. So, they said that were indeed aware of the incident between a fan of Mavericks and the family of Chris. They further added, “It was unacceptable behavior and will not be tolerated. The Mavericks along with American Airlines Center swiftly removed the fan from today’s game.”

Statement from the Mavs after Game 4: “The Dallas Mavericks are aware of an incident between a fan and the family of Chris Paul. It was unacceptable behavior and will not be tolerated. The Mavericks, along with American Airlines Center, swiftly removed the fan from today’s game.” https://t.co/nBW7dPkj0E

Chris Paul and Phoenix Suns will play against Dallas in Game 5 on Tuesday and then Game 6 on Thursday. Considering the fact that this incident made him quite angry, it’s likely that he will play aggressively.