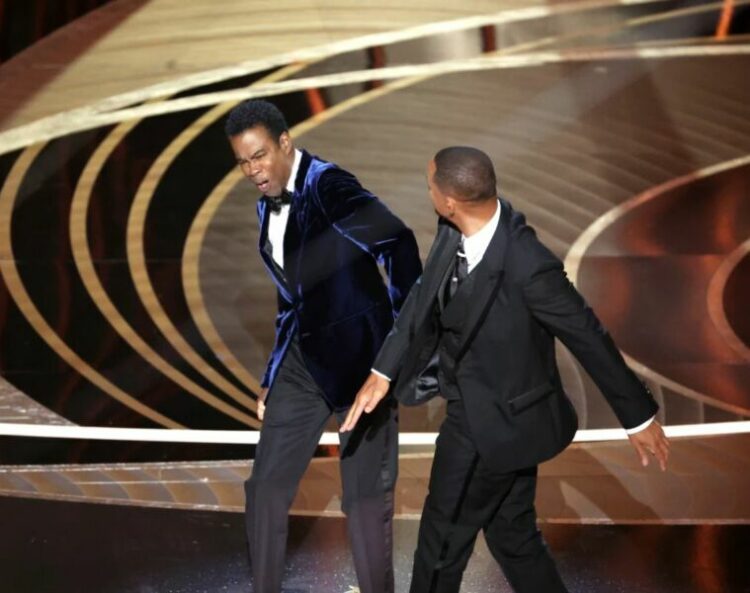 By now the entire world is aware of what happened with Chris Rock on the evening of the Oscars. And there have been quite a lot of talks and debates about the same. Will Smith was penalized by several authorities on several occasions for physically assaulting Rock, that too publicly. However, where can we see the incident heading recently? Is there repentance on Smith‘s part? Has Rock forgiven him? Are things back to normal? Sadly that isn’t the case. In fact, we don’t know if it ever will be.

Recently Chris Rock has brought the topic on his comedy show in Atlanta where he joked that slapped by ‘Suge Smith’, omitting the name of Will deliberately. Keep reading the entire article to know about what exactly happened.

Let’s briefly rewind to the evening of the incident

At the 94th Academy Awards on March 27, 2022, actor Will Smith walked onstage and slapped comedian Chris Rock on his face during a presentation for Best Documentary Feature. Furthermore, the slap was because Rock had made fun of Jada Pinkett Smith’s shaved head, which she had been shaving since 2021 due to alopecia areata. In addition, Smith came back to his seat the uttered offensive slang to Rock. However, Rock was calm and conducted the show properly.

Later that evening, Smith won Best Actor. Furthermore, he apologized to the Academy of Motion Picture Arts and Sciences and other nominees. However, he did not apologize to Chris Rock. The next day, he issued an apology to Rock and the Academy via social media. Smith had to resign from the Academy membership on April 1. This was because people criticized him severely. Also, the Academy had banned him from attending its function for ten years, effective April 8.

After all this, we see that television channels in the United States mostly muted the incident due to federal censorship laws. However, uncensored international footage went viral on social media. Besides, some broadcasts turned out to be the most viewed video for a few days from then. The incident largely overshadowed the rest of the ceremony and prompted worldwide outrage, commentary, and debate.

Who is Suge Knight?

Marion Hugh “Suge” Knight Jr is a former American music executive and the co-founder and former CEO of Death Row Records. In addition, he was the central figure in gangsta rap’s commercial success.

He is eligible for parole in October 2034. This is because the police have charged him with several felonies. Besides, he is a prime suspect in planning the murder of the Notorious B.I.G.

Recent developments on the ‘slap’ case

Firstly, Smith apologized to Rock’s family and to his mother, Rosalie, who was horrified to see her son hurt. “When he slapped Chris, he slapped all of us. He slapped me.” This is what she has to say.

“There is no part of me that thinks that was the right way to behave at that moment”. Secondly, Will Smith has made a regretful video tape of six minutes that he posted recently. “I am deeply remorseful and I’m trying to be remorseful without being ashamed of myself.” To  Chris Rock, he said: “I’m here whenever you’re ready to talk.”

Furthermore, he spoke directly to a camera about his behaviour at the March 27 Academy Awards. We know that he had slapped presenter Rock after the comedian referred to the hairstyle of Jada Pinkett Smith.

Although there is no denying that mocking somebody’s physical appearance at a global function isn’t cool, nothing deserves physical abuse. Chris Rock was indeed wrong to make fun of a person’s ailment. However, Will Smith’s retaliation was worse. At least, we are glad that he understood his mistake and made the most of it.

Chris Rock’s set at the Fox Theatre in Atlanta came immediately after Will Smith posted a video. It was of himself apologising to Rock for his indecent behaviour at the function.

Furthermore, we see that this was Chris Rock’s first comedy show after Will Smith released a new video apologizing for slapping him at the 2022 Oscars. Nevertheless, the comedian joked about the slap. However, he didn’t address Smith’s apology. In fact, he did not even acknowledge Will on stage. He changed his name to Suge( we have already talked about who he is). Is there any subtle touch of mockery in this?

Sometime after Smith posted a video apology for slapping the comedian on live television at March’s Oscars ceremony, Chris Rock took the stage at the Fox Theatre in Atlanta.

“Everybody is trying to be a f—ing victim,” Rock said. “If everybody claims to be a victim, then nobody will hear the real victims. Even me getting smacked by Suge Smith … I went to work the next day, I got kids.” Perhaps, this might brew a new controversial issue as to why Will was replaced with Suge. Although we don’t know what the reason is to change his name to Suge, we are curious.

“Anyone who says words hurt has never been punched in the face”. Rock joked about the hurt he felt during the show. To speak of some facts here, Chris Rock is giving several performances at the Fox Theatre for a few days. Besides, it is part of his Ego Death World Tour.

Although Chris Rock has maintained silence and refrained from penalizing Smith, we understand that the tension between them is still strong. Meanwhile, both of them are engaged in their respective works. We hope they will be able to resolve their differences very soon.