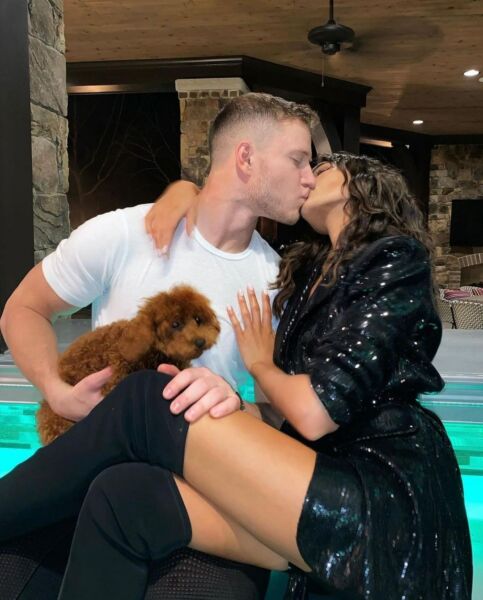 The glamour world of the Hollywood film industry is full of things that will make you look at life from different perspectives. Rarely do we find celebrity couples in this industry being head over heels in love with each other. However, let’s talk about the relationship between popular media personality Olivia Culpo and her footballer boyfriend, Christian McCaffrey. It is possible we start looking at love and relationship from a different angle.

According to Olivia Culpo, it is her boyfriend who has restored her lost faith in love. “You are everything I ever dreamed of and more.” These words are enough to convey how deeply they are in love with each other. Pretty recently, they celebrated their third anniversary. So Olivia shared some of their most loving and intimate moments with their fans as throwback photos on Insta.

So would you like to know more about Christian McCaffrey and his relationship with Olivia Culpo? Stay tuned to us if you are eager to learn more about their intriguing love story. Let us take a look!

A Short Bio of Christian McCaffrey

As mentioned earlier, Christian McCaffrey is an American football running back for the National Football League Carolina Panthers (NFL). In fact, he played college football at Stanford, and the Panthers drafted him in the 2017 NFL Draft. He also became the AP College Football Player of the Year and was a finalist for the Heisman Trophy.

Furthermore, McCaffrey holds the NCAA record for most all-purpose yards in a season with 3,864. He also has numerous NFL and Panthers franchise records. Moreover, he is one of the three players to record 1000 rushing and 1000 receiving yards in the same season.

Many of you probably did not know that McCaffrey’s father, Ed McCaffrey, also played college football at Stanford. He played in the NFL, mostly for the Denver Broncos, from 1991 to 2003. At the same time, his mother, Lisa Sime, played soccer at Stanford. Christian’s elder brother Max played football at Duke University. Moreover, his younger brothers also belong to the world of sports and are footballers. So it is pretty natural that Christian would also play football one day.

There is no doubt that Christian McCaffrey has a glorious career. However, let us now look into some of the exciting details of his love life. He has been in a relationship with Miss Universe 2012 and fashion influencer Olivia Culpo since 2019. Needless to say, they are one hell of a hot couple, a deadly combination of a footballer and a model.

Christian & Olivia Celebrated the Third Anniversary of Their Relationship

All of you fans of this celebrity couple might have already seen their posts on Instagram and other social media platforms, right? Yes, pretty recently, they celebrated their third anniversary. In fact, the Carolina Panthers, the team for which Christian plays, also wished the couple by sharing some of their sweet throwback pics. This also included the couple sharing a kiss and a cute family mirror selfie of the pair with their pup Oliver.

Moreover, Olivia Culpo is highly impressed with Christian McCaffrey’s way of treating her. So she captions in her post, “three years ago, I was not looking for a relationship. When my best friends Kristen & Tyler called me and asked if I would be open to meeting their friend Christian I was apprehensive.”

The former Miss Universe added, “I was worried it would be the same old story all over again and that all guys were the same. While my expectations were low, I knew I couldn’t close myself off and make decisions based on fear.” In fact, Culpo also shared a snap of the NFL player waiting for her before their first meeting. Such a sweet gesture!

What Else Does Olivia Comment About Her Relationship With Christian McCaffrey?

If you follow Olivia Culpo’s posts on Insta, you will know that she is hopelessly in love with her boyfriend, Christian McCaffrey. Rarely do we find a celebrity couple head over heels in love with each other to this extent. Therefore, she feels grateful for the voice inside her that asked her to give love another chance.

So it seems that she probably had bitter experiences in her love life with her ex-boyfriends. Therefore, she was apprehensive about starting a new relationship with Christian. However, she gave love a second chance, and now she feels grateful for that.

Olivia often refers to Christian as her yin to her yang. He is the epitome of strength through humility. Therefore, she thanks her for being her rock and restoring her faith in love. He is everything that she had ever dreamed of and much more.

As Christian and Olivia celebrated their third anniversary, they shared throwback photos of their loving and intimate moments on Insta. McCaffrey went down memory lane with his own Instagram post. The post included several pictures of the couple and a video of Culpo playing the cello.

McCaffrey recalls it is hard to believe that it’s been three years with his best friend. In the post, McCaffrey mentions that he was unsure whether it was the first time he heard Olivia play the cello or the first time he saw her hit the heavy bag. That is when he fell in love with her. Christian also thanks her for making him laugh and always sticking by his side. Olivia is like an inspiration to him who helps him overcome all challenges in his life.

It was in 2019 that the two sparked dating rumors. Fans spotted them on a romantic vacation in Cabo San Lucas, Mexico. This was following her split from New England Patriots player Danny Amendola. In fact, last year Culpo and McCaffrey spent a sunny St. Barts “datecation” along with Culpo’s younger sister, Sophia, and her boyfriend.

So as we conclude, we can say that both Christian McCaffrey and Olivia Culpo are head over heels in love with each other. According to Culpo, McCaffrey was the one who restored her faith in love once more when she was in a mess. Therefore, currently, they want to make every moment of their lives blissful and memorable with each other.

Also read: What Does Tayshia Adams Do for a Living?