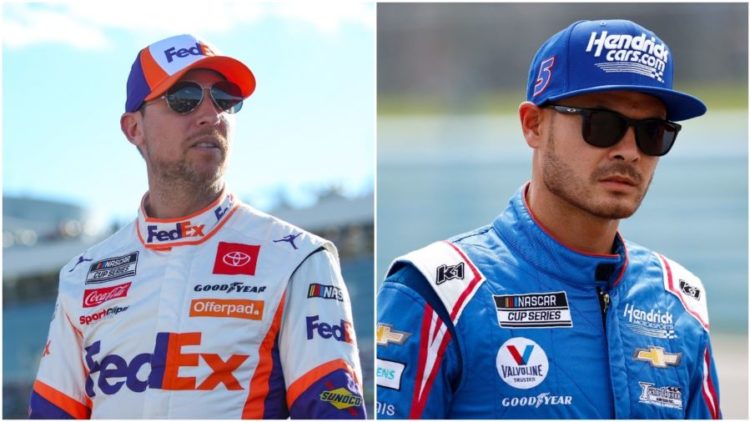 Are you a fan of the NASCAR Cup Series? Well, then you must have heard the names, Kyle Larson and Denny Hamlin, right? Yes, you guessed it right, they are famous American professional auto racing drivers. So often, we find them making the headlines due to their outstanding performance. However, this time they have become the talk of the town because of their internal conflict.

If you follow the NASCAR series, you will know that Kyle and Denny are competitors and friends. So what might have led to this conflict? Let us share all the details regarding what took place between the popular auto racing drivers.

What Was The Incident All About?

As we mentioned earlier, both Hamlin and Larson were good friends along with being competitors. In fact, Hamlin showed the strength of their friendship last year when he allowed Larson to use his plane. Larson used it to travel back and forth between the sprint car Knoxville Nationals and the NASCAR race at Indianapolis. Even though the two were in the midst of a regular-season points battle, he helped Larson.

However, pretty recently, the Joe Gibbs Racing driver jokingly called out his friend on Twitter. This happened last week after watching the Hendrick Motorsports driver start a crash on the final lap at Talladega that took out both of his 23XI Racing cars.

So the tweet exploded into controversy. Hamlin had made a joke about the 2021 champ using a meme that featured a Family Guy clip. This clip was about Asian women being bad drivers. Since Larson’s mom is Japanese American, Hamlin had naturally directed it to him. This is where the conflict initially began. Let us now learn more details about the incident.

What Was Kyle Larson’s Reaction?

Many of our readers probably wonder how Kyle Larson reacted after hearing this derogatory remark from his competitor. Let us share with you the details. You must have heard that Kyle Larson had recently had an interview before the race in Delaware. Unsurprisingly, the journalist asked his thoughts on the situation, to which Larson candidly responded.

He jokingly said, “NASCAR did what they had to do, and I appreciate Denny going through the steps to learn from that.” Moreover, he also thought it was indeed a poor judgment on Hamlin’s part.

While concluding his statement he said that since they are celebrities, they need to be very careful with what they say to the public. Larson feels that his competitor will learn a lot from the next couple of weeks. So what we could figure out was that he did not take it the hard way.

As we mentioned earlier, the tweet from his friend did not offend him much. Instead, he took it up sportingly. However, he also added that even though he did not feel bad, several others might take it the wrong way. Since they are celebrities, they need to be cautious about what they say and to whom. You can go through this Twitter kink to see exactly what Larson said

Kyle Larson says NASCAR did what it had to do in response to Denny Hamlin’s tweet. Larson: “I wasn’t personally offended by it, … but I know, and I think he knows now, there are millions of other people that a tweet like that could offend.” pic.twitter.com/lK7IEI3Ufq

So when the reporters asked for his opinion regarding this, he said that since Hamlin is his friend, he did not mind anything. In fact, he is ready to move past it and get back focused on racing. Therefore, we hope there won’t be any more problems between the star racers.

What Was Hamlin’s Response?

Hamlin also realized his mistake and admitted that he had a talk with Larson regarding this matter. In fact, he also added that he would like to keep the contents of their conversation private. However, he acknowledged that he should not have made such a comment.

Initially, he had found the meme hilarious; however, later on, he realized that it was indeed offensive and planned to learn from this situation to avoid them in the future. You can look at what he said in this tweet

Denny Hamlin says he respects NASCAR’s order of sensitivity training after his tweet earlier this week.

Hamlin: “I thought it was hilarious, but it also is insensitive. I definitely understand how some people could find it offensive. If it’s one, then it’s one too many.” pic.twitter.com/3CTODp29SH

So as we conclude, we can say that both Denny Hamlin and Kyle Larson are the auto racing stars. Therefore, they need to be very careful about what they are commenting on each other.  We hope they settle everything among themselves.