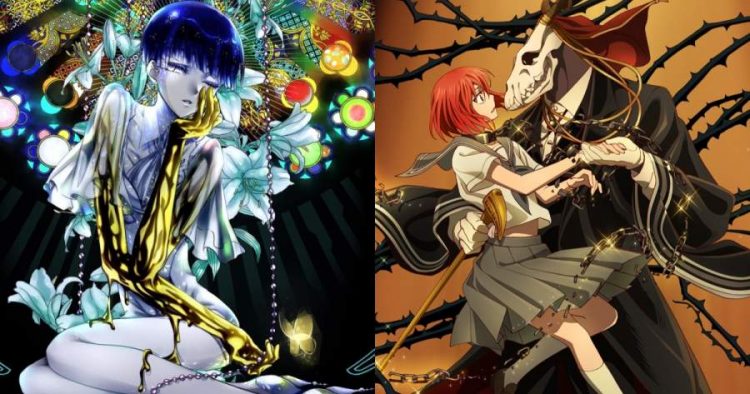 So, what defines a ‘dark anime’? Although there are several titles out there with 12+ ratings, can they be classified into the dark anime series category? Of course, a dark anime may have gore and horror elements. However, we also look for the doom & gloom, the psychological tension, morbid and bleak setting, etc., while judging a dark anime. But above all, an anime with a dark setting offers much room for insight.

Rather than entertainment, it gives you research material. Moreover, there’s tragic catharsis in some of the anime series. But, what stands apart is the story and characterization. Hence, without further ado, let’s jump straight into the top 18 dark anime titles.

Top 18 Dark Anime Series You Should Not Miss

Firstly, let’s experience the grim world of Hellsing with heavy political overtones. Also, Hellsing has the most iconic vampire of all time – Alucard. Besides, he is an exterminator as well as a servant who’s out there to battle his own kind and protect Hellsing and his master Seras Victoria.

2. Higurashi: When They Cry

Feast your eyes on one of the best horror anime of all time. If you want gory stuff as well as psychological tension, then it’s for you. Moreover, it has a brilliant yet mysterious plotline to keep you on the edge of your seat.

In addition, it’s unpredictable as well as intense. Hence, start this horror journey in the cursed village of Hinamizawa, where the story takes place.

Another one of those gory and horror anime. Like Higurashi, Elfen Lied has some violence and gore. However, underneath the bloodshed, there’s a dark and depressing story.

To illustrate the plot, let’s say a secret experiment on humans goes wrong. So, you can pretty much guess the gruesome consequence. The story revolves around Lucy, in particular, who manages to escape the top-secret lab.

So, most of you have heard the phrase ‘An for an eye.’ Well, it takes a whole new meaning in Hell Girl. It’s a series of stories connected with one trope – revenge.

Moreover, the anime explores the dark side of human nature, where a person can give up on their soul to seek revenge. Very few series can paint a vivid and honest picture of negative human nature.

Another anime with a creepy and dark setting. Firstly, it may start out slow, but it will surprise you. Besides the setting, it deals with supernaturalism and horror. The story takes place in a village where people die mysteriously. As the story progresses, you eventually realize that all is not what it seems to be.

Next, let’s talk about an anime with a post-apocalyptic setting. In addition to the setting, Ergo Proxy discusses some stark realities of our age. Furthermore, the plot and the setting are very different from all the other mentioned titles so far. And the fact that it illustrates humanity’s precarious situation, it’s no wonder that Ergo Proxy is one of the best dark animes of all time.

So, as we know, terrorism is a hot topic of the world. Therefore, it’s a must-watch series if you are looking for dark and poetic anime. Moreover, it has literature references. The story also focuses on the trope of nature vs. nurture and the fight for individual identity.

In the end, you will question the very society after watching this anime.

Next, we have something special. Don’t let this anime fool you. At any rate, this anime may seem like an average high school story with love as the core theme. But it has a pretty dark and messed up twist. I don’t know if there’s any other anime with such a dark, twisted, and crude twist. So, be mindful before picking it up.

Prepare for a psychological rollercoaster. To begin with, let’s say you are forced to play a game, but you have your life at its stake. Nevertheless, this title has everything a viewer wants to see in a dark anime. From well-drawn characters to the intriguing plot and a yandere female lead, it has everything.

Before watching this, let me warn you. You won’t see your favorite umbrella the same way ever again. To begin with, the plot revolves around Yomiyama north middle school, where people die at random because of a certain past event.

Furthermore, this anime has a creepy opening as well. In addition, the dark setting, OSTs, gore, and obscene deaths all contribute to the creepiness.

Next, we have a special addition. This anime explores the universal question – “what happens when you die”? However, there’s a certain twist to it.

Firstly, when you die, you land in a place in between hell and heaven. Thereafter, you are put through some tests. It will decide whether you are to be sent to hell or heaven.

Although this mysterious anime has some sinister moments, it has a wonderful setting. The main character Riko and her robot friend join to explore the depth of the abyss. And, as a result of that expedition, the story takes on a dark turn.

Moreover, as a story of adventure, survival, and dark moments, the anime has elements similar to Madoka Magica.

Next on the list is Yami Shibai, a series of short horror stories. Currently, it has a total of eight seasons. Furthermore, the stories are based on Japanese urban legends. It’s not often we see an anime with jumpscare horror, dark settings. Moreover, the name itself translates to ‘Dark Theatre.’

First of all, this list would have been incomplete without Steins;Gate. The mature audience would especially love this.

The story follows Rintaro Okabe (Aka Okarin), a scientist who develops a time machine via a microwave. As a result, he and his team can now send messages to the timeline of the past. However, this discovery leads to some serious trouble.

Next up is a perfectly blended series, which has horror, psychological and dark thrillers. In addition to the chilly atmosphere, it has a pretty messed-up storyline. Therefore, it’s highly recommended to mature viewers. The story takes place in an orphanage, where children live happily with their ‘Mama’. However, things get darker once a child is adopted and never to be seen again.

Generally speaking, Monster is an underrated anime. The story follows the perspective of Kenzo Tenma as he seeks the ‘ghost’ responsible for inexplicable murders. In other words, it has a well-paced deep plotline. Moreover, the suspense will keep you on your edge. It is a must-watch if you are looking for some dark and mature anime.

Death note is an obvious entry for a list of dark animes. Moreover, it’s so famous that you have probably heard of it. The story follows Light Yagami, who stumbles across a Notebook called ‘Death Note’. Thereafter, after taking that book, he discovers a shinigami called Ryuk. In the death note, anybody, who’s name is written will die.

Let’s end the list with a very controversial Isekai anime of 2021. The story centers around a ‘hero’, Keyaru, a ‘healer’ in an Isekai world.

However, all of his glory was stripped off by a princess who, along with others, abused Keyaru in all sorts of awful ways possible. So, Keyaru seeks revenge similarly by redoing the time itself.

So that’s all,’ folks. These were some of the best titles from a never-ending list of dark anime series. I hope you will enjoy and ponder over some interesting topics that the shows offer.

13 Best Yuri Anime Among The Best of All Time