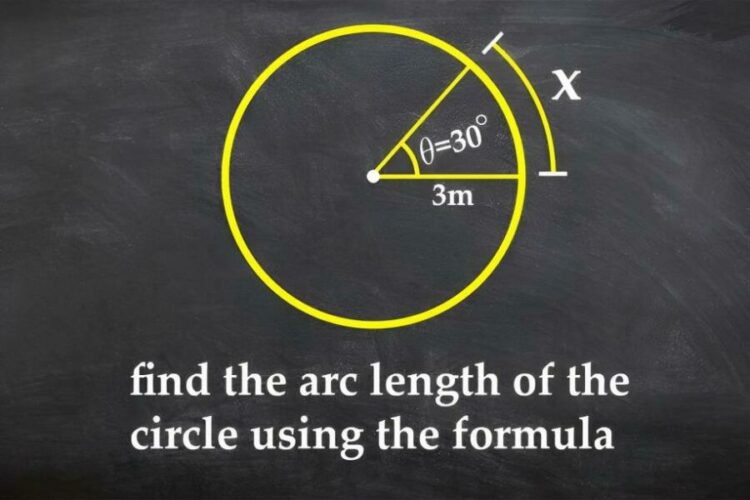 Mathematically, any object’s curved edge is called an arc. An arc is a continuous curve segment or a circle’s circumference. The length of an arc is the distance around a circle, curve, or another geometric shape.

A circle can be divided into two semicircles or one major arc and one minor arc by choosing two spots. An arc’s length is greater than any line connecting its endpoints. In this post, we will examine the concept of an arc, and several forms of the length of an arc formula.

What is Arc Length?

A relay race is being held on the precisely round indoor track of a newly opened gym to mark the occasion. Due to the round nature of the track, each runner will travel in a curved line from the point. Five people make up each team, and each person only runs a piece of the entire track.

They receive the baton to the point at which they pass it to the following runner. As a result, each runner must go over an arc, a curved line connecting two sites. The arc length is the distance along an arc from one point to the next.

The Arc Length Formula is frequently used to calculate distances along the curved path that makes up an arc. An arc length is a distance traversed by a circle’s curved line. If a straight line and two endpoints of a circle are compared, the straight line will always have a shorter length.

Depending on the arc’s central angle unit, many formulae can be used to calculate an arc’s length. The center angle is frequently measured in radians or degrees. The formula for arc length for a circle is known to be times the circle radius.

General Approach to the Formula for Arc Length

By joining a limited number of its points, one may approximate a curve in the plane. This is accomplished by creating a polygonal route using line segments. Calculating the length of each linear segment is rather simple. The Pythagorean theorem, for instance, may be applied to Euclidean space.

Additionally, the chordal distance, a measure of the approximate length, may be calculated by adding each linear segment’s length. Sometimes a polygonal route may not already exist for the curve. Here, employing an increasing amount of shorter segment lengths is necessary. Approximations are undoubtedly more accurate and efficient as a consequence.

The subsequent approximations’ lengths won’t become shorter. Additionally, they could keep growing eternally. However, they will undoubtedly gravitate to a finite limit for smooth curves. This happens as the segment lengths are arbitrarily reduced. There are several curves where the value of L is the smallest. Any polygonal approximation’s length is capped at this amount.

It may be calculated using the equation C=pi d, where C stands for circumference, d for diameter, and {eq}\pi {/eq} is the constant in mathematics. Practical circle-related issues often pertain to a circle’s radius r rather than its diameter. Since the diameter is always two times the radius. The equation for circumference may be written as $$C=2pi r $$, which is the more usual form.

It is important to remember that every arc is a circle. It has a length smaller than the circumference to comprehend how circumference and arc length are related. This implies that an additional scaling factor must be used to determine arc length. This omitted component is the subtended angle, sometimes referred to as the angle subtended by the arc.

The technically accurate term for the method above determining the angle is “subtended.” The length of the related arc is directly proportional to the subtended angle. The magnitude of the subtended angle increases with increasing arc length and vice versa.

The arc length may calculate using either a formula that employs degrees or radians, technically speaking. The inner angle of a circle is often expressed in degrees, although it may also be expressed in radians.

The arc length measurement in a unit circle is mathematically identical to the radian measurement of the angle that the arc length subtends. The number of radii of the circle that might fit in the arc that the angle creates may regard as the measure of an angle in radians. An angle of 1 rad, therefore, subtends a radius-length arc.

An arc is a common and helpful figure in geometry. Any smooth curve is typically referred to as an arc. The arc length is the distance along the curve from the beginning to the endpoint. The term “arc” refers to a section of a circle along its circumference.

The length of the arc or the magnitude of the angle it subtends at its center is typically used to determine the arc’s size. The angle subtended at the center is sometimes referred to as the arc measure or the angle measure of an arc. It is expressed in radians or degrees.

Packing Efficiency of a Rectangle

How to Use The Y-Intercept Calculator: Everything You Need to Know!

Make the Best Envelope at Home with Different Designs