Did you know that the EU fines Google a record antitrust fine? 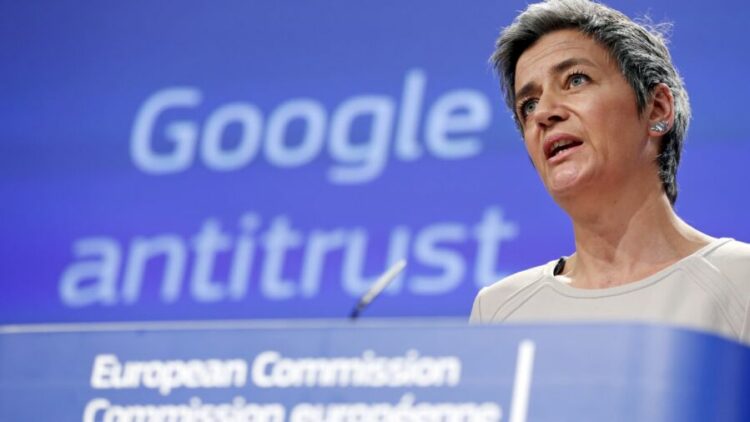 In Europe, Google has suffered a devastating blow worth almost $4 billion. Following a 2015 inquiry, the European Union imposed a record fine on the business. Its charging abused its position as the dominant smartphone operating system (through Android). They also engaged in anti-competitive behavior.

The European Court of Justice rejected Google’s appeal of the judgment and mainly affirmed the initial penalty. The General Court has only marginally reduced the sentence from the original 4.343 billion Euros issued by the commission to 4.125 billion Euros.

Furthermore, holding that the search engine behemoth broke antitrust regulations in response to Google’s fruitless attempt to have it declared invalid.

“The General Court largely confirms the Commission’s decision that Google imposed unlawful restrictions on manufacturers of Android mobile devices and mobile network operators in order to consolidate the dominant position of its search engine,” says the official press release from the Court of Justice of the European Union on behalf of the General Court.

The EU’s investigating body highlighted three different sorts of contentious corporate strategies in its case against Google. First, Google was accused of forcing smartphone manufacturers to preinstall its in-house Chrome browser on Android phones in order to give Play Store access. Then, Google came under fire for paying manufacturers and mobile carrier service providers to install just its own search engine on smartphones.

By doing this, Google eliminated the motivation for them to use any rival products. One of the ways Google was alleged to have abused its dominant market position was by linking its search engine to its own web browser. Last but not least, there was the argument that Google forbade manufacturers from selling phones that run Android forks. It’s interesting to note that Google compelled manufacturers to stop selling products powered by Amazon’s Fire OS, an Android fork. This amounted to unfair commercial hindrance in the eyes of the commission.

Google has experienced setbacks before. An EU court upheld a second $2 billion sentence in November of last year. It is for promoting its own comparison shopping site unfairly. The corporation was fined around $1.6 billion in 2019 for restricting its competitors in the advertising market.

Given that similar antitrust lawsuits against companies like Apple, Amazon, and Meta are already underway. Hence, the costly legal defeat suffered by Google will undoubtedly increase regulatory confidence.

Naturally, Google is disappointed with the outcome. But the court’s rigorous approach sends a strong message at a time. Especially when the Digital Markets Act (DMA) is poised to limit the influence of big tech in Europe.

Apple is also not in the safe area. The company’s role as a gatekeeper and its taxing practices for entering its walled ecosystem is currently being looked into in Europe.

Amazon has drawn criticism for using aggressive marketing techniques to boost its business. At the same time, Meta has come under fire for its inadequate privacy policies and its dubious data processing.

Also read: How To Download Youtube videos: The quick tips to save the videos to your device