Difference Between A Dutch Braid and A French Braid 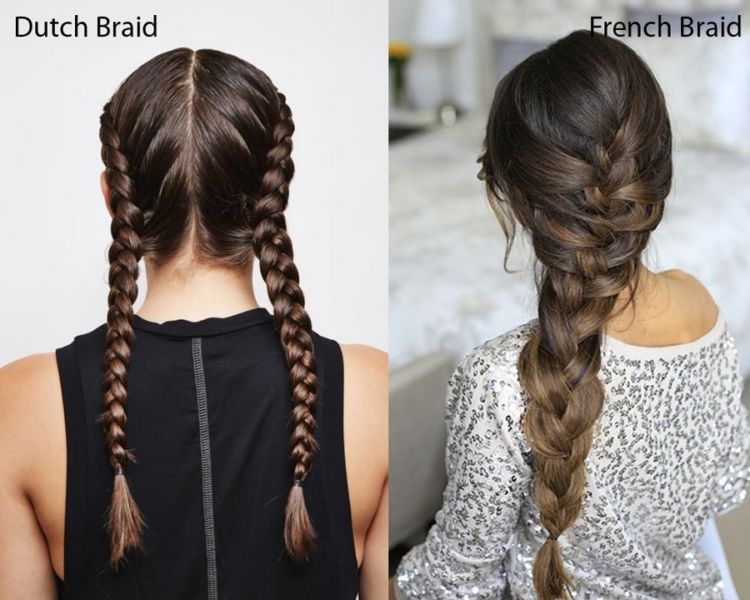 The French braid and Dutch braids are popular hairstyles loved by women all over the world. It is hard to identify the differences between these braids. But hairstylists know that these are very much different. The French braids can be traced 6,000 years ago in North Africa. It was popular among women of China’s Sung Dynasty in 960. It was a great choice of braids for women who wanted to keep their hair off their faces. The braids also offer a modest and natural appearance. That is why it is a traditional hairstyle in many countries.

The best thing about the French and Dutch braids is that it suits all women. There is a small difference in the hairstyles. The French braids let the hair to cascade down the head. On the other hand, Dutch braid offers a detailed 3-D effect. The braid will float above the scalp. Both of the braids employ the same technique. Learn about some aspects of the Dutch braid vs French braid that makes it different.

Braids style – The difference in technique

The French and the Dutch braids begin with three strands in the crown of the head. For French braiding, you have to cross the strands over the middle one and then pick up the piece of another portion of hair with each cross. After gathering the hair into the braid you have to switch to a regular plait to complete the length. Then secure the hair at the nape of the neck. Also, you can try the other finishes as well like the effortless updo. To put it easily, in the French braid one has to cross-sections of hair one over the other.

The Dutch braid is described as an inside-out braid. It offers a more pronounced look than the French braids. If you want to create the 3-D look then begin with three strands similar to the French braid. But instead of crossing the strands over the center strand, you have to pull it under the center. Then it will cause the hair to puff up. Often the Dutch braid is known as the “reverse French braid” or “inside-out braid”. It is because of the underneath technique of braiding the hair.

For a beginner, it may be hard to do the braids but with time and patience, you can achieve it. You can start practicing the French braid first and then go to the Dutch braid. Do it for fun. Then your hairstyles will look professional in the long run.

How to French braid?

Many people think that because of its name the French braid originated from France. But it is not. Greeks and Africans are given the credit of inventing the style of the braid. The early evidence of it is the Tassili n’Ajjer mountain range in Algeria. It has rock art from 6000 years ago and in it, women were wearing this braids style. Also, a similar hairstyle was seen in Greek art in the kouros statues. Although there is no clear proof of who wore it first one fact is clear. This style of braid is not from France.

You have to begin the French braid by separating the section of hair into three small sections. It has to start from the top part of the head. Then follow this pattern.

But before crossing the next strand over you have to add another piece of hair from the side of the braid. You have to continue like this until you reach the nape of the neck. Then you have to complete the braid as you do a regular braid. The result is that the hair must look smooth and tight against the head while using all the hair.

If you want to French braid to look neat then try to be consistent with the amount of hair you add to the braid. But a bumpy undone French braid can look stylish too. You can tie the end with the cute ribbon.

How to Dutch braid?

The Dutch braid may look complicated to do. But if you learn to do the French braid you can easily do the Dutch braid. Begin the Dutch braid by separating the hair into three sections starting from the crown of the head. Then follow the pattern.

Then do not forget to add more strands of hair as you go. Complete the braid the same as the French braid. Finally, neatly tie the end of the braid. The result of this braid will appear as if it is a thick 3-D braid on the top of the hair.

But with the Cornrows which also pass under the hair, the braiding is tighter. So the result will be different because the hairstyle will look flattering against the scalp.

Dutch braid vs French braid is one of the popular hairstyles of 2021. It never goes out of style because every woman likes to braid their hair once in a while. Recently the French braids trended because of Taylor Swift’s messy French braid in the Evermore album. The braid was styled carelessly and it looked natural. That is why many women like simple French braids.

Another person to make the French braids popular is the animated character Elsa in Disney’s Frozen. There is one sensational scene in the movie where Elsa runs away from Arendelle and feels independent and free to use her ice powers. At that time her gorgeous French braid adds even more depth to the scene. The undone look of the French braids became popular after this.

Try doing the French and the Dutch braids. These are some of the popular hairstyles of this season. So enjoy these elegant and natural hairdos.

You may also read: UNice Lace Frontal Wig Nice for Your Hair