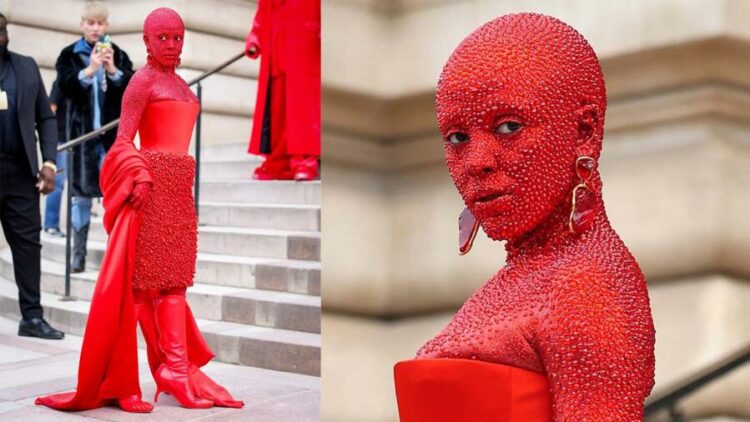 The Schiaparelli show has become a witness to one of the most memorable moments in the Paris Fashion Week. The person associated with the memorable moment is none other than Doja Cat. We know the famed singer has been the centre of various controversies and headline-making incidents in recent times.

This time, her costume is at the centre of attention. On the 24th of January 2023, she stepped into the Schiaparelli show in an all-red ensemble. She used more than 30,000 Swarovski Crystals as part of her costume. The theme of her costume is Chinese New Year. Therefore, if you wish to know more about her dress, then this article is the perfect stop for you. Read this article to know all about this interesting dress of Doja.

We know that the Schiaparelli Spring couture has began in Paris. Dressed in Dante Alighieri designs, supermodels like Irina Shayk, Naomi Campbell and Shalom Harlow set the show on fire. In fact, the splendid combination of face paint and bronze-gold body made it difficult for people to distinguish between natural human bodies and other objects.

In fact, the Vogue UK make-up artist Pat McGrath stated that the show displayed a splendid blend of masculinity and femininity. However, everything was overshadowed by Doja Cat. After all the shinning and scintillating appearances, Doja stepped into the front row dressed in an all red Swarovski crystals. In fact, McGrath stated that it has been a great experience working with Doja and Roseberry.

We know that it is cold now in Paris. However, Doja set the event on fire with her red ensemble. The fashion house that dressed her up is well-known for its blinding designs, yet Doja’s look was something different. She was shinning under the highlighter. However, if you think that the highlighter alone made her shine.

She had over 30,000 Swarovski Crystals on her body. Yes! You have read that correct. It is over 30,000. All over the exposed portions of her body, these crystals were glued down. In fact, even her fingertips did not escape the designer’s sight. According to the stylist, Doja showed excellent patience and dedication. This is due to the fact that she had to sit with the team for around 5 hours to complete the costume. Moreover, the golden touches on her hair, made by Guido added a sculptural finish to her look.

We know that Elsa Schiaparelli, the famous fashion designer is responsible for the wave of creativity that swept the fashion world in the 20th century. Her innovative ideas made fashion a place to unleash the designer’s creative instinct. In recent time, it is Maison Schiaparelli who is carrying on the torch of this tradition in fashion. Thus, Doja’s refreshing and innovative look added a special dimension to this tradition. In fact, she was really out of the box and made heads turn, though people could not see her real face.

Also read: When And What To Expect In Redo Of Healer Season 2