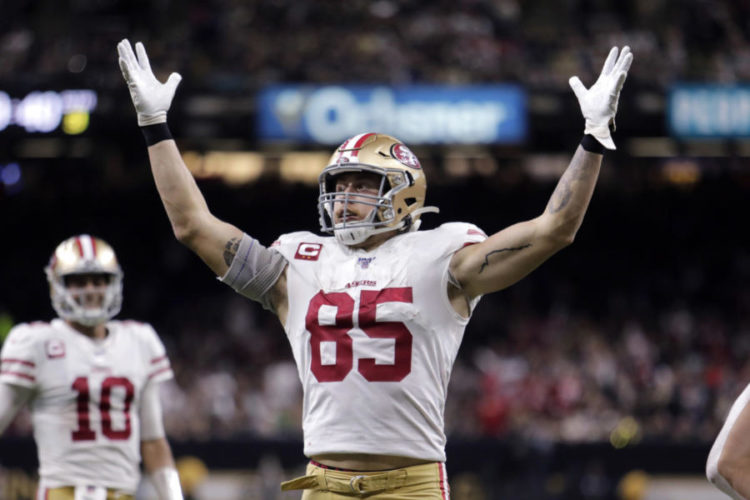 Recently George Kittle revealed that something is going wrong in the locker room of the San Francisco 49ers. In any form of team sports, the locker room atmosphere becomes really important. It is not always about the skill of the players. In a team game like the NFL, a positive bonding between players of a particular team is essential. Therefore, if something goes wrong between the players, the team might have to suffer in the long run.

As per the words of Geroge Kittle, the San Francisco 49ers seem to have a similar problem. In fact, he admitted that after the 49ers drafter Terry Lance last season to replace Jimmy Garoppolo, things started to get awkward between the two. Read the article to know more on this topic.

The San Francisco 49ers traded a 2018 second-round pick to the New England Patriots for QB Jimmy Garoppolo, back in October 2017. After joining the club, Jimmy started the last five games of the season. In that season for the 49ers, Jimmy went 5-0 as a starter. He also threw 1,560 yards, with seven touchdowns and five interceptions.

Following this short but successful run, he was rewarded with a five-year, $137.5 million contract by the franchise. As a result, in the next three seasons, Garoppolo went on to perform exceedingly well. In these three seasons, he had an impressive record of 17-8 as a starter. To add to this, he also threw for 5,792 yards, with 39 touchdowns and 21 interceptions.

But the biggest problem of Jimmy had been his poor health. As a result in 2018 and 2020, he played only 9 out of 32 games. This ultimately led the 49ers’ general manager John Lynch and head coach Kyle Shanahan to spend a king’s ransom to sign Terry Lance from North Dakota in the 2021 NFL draft. To make this draft, the 49ers had to give up the first-round picks for 2021,2022, and 2023. In addition to this, they also had to give up a third-round pick for 2022.

Naturally, when a team gives up so much in order to get a QB, with another QB already on the roster, things are bound to get ‘awkward’ in the quarterback room.

George Kittle Comments On The ‘Awkwardness’

Recently George Kittle of the San Francisco 49ers joined the Pat McAfee Show. He was to discuss various offseason topics. However, during the interview, Pat McAfee asked him about the situation between Garoppolo and Lance. To the question, Geroge Kittle admitted that things are ‘definitely awkward’ between the two. Moreover added that this situation is a natural outcome of the Terry Lance deal.

George Kittle also commented that despite the ‘awkwardness’ in the QB position, the locker room culture is great, and the entire team is focused on winning the Super Bowl. He also praised Garoppolo for handling the situation with ‘total’ professionalism. Check out the link below for the interview with George Kittle:

The 49ers did not have a first-round pick in this year’s draft. In the next year, too, they will not have a first-round draft. Thus Terry Lance will be under pressure to become the starting QB at the earliest. The last season had not been well enough for him. He played well in the preseason. But Kyle Shanahan went with Jimmy Garoppolo to start the season. Moreover, Garopplo helped the 49ers to the NFC Championship Game.

Lancee played a few matches in 2021. He started twice for the 49ers. With a record of 41-of-71. He had five touchdowns and two interceptions. There was a rumor about the possible Garoppolo trade. But now, it seems unlikely to happen. However, George Kittle seemed to be okay with Terry.

Thus, right now, any prediction about the 2022 season seems problematic. Let us wait and watch out for further developments.

George Kittlle’s comment about the ‘awkward’ QB situation in the 49ers seems to point to some development in the near future. The 49ers did not trade Garoppolo till now. This can suggest that the team is still not sure about Terry. However, whatever might be the cause, the 49ers must take immediate action to solve any possible ‘awkwardness’ within the team and look forward to a brighter future.