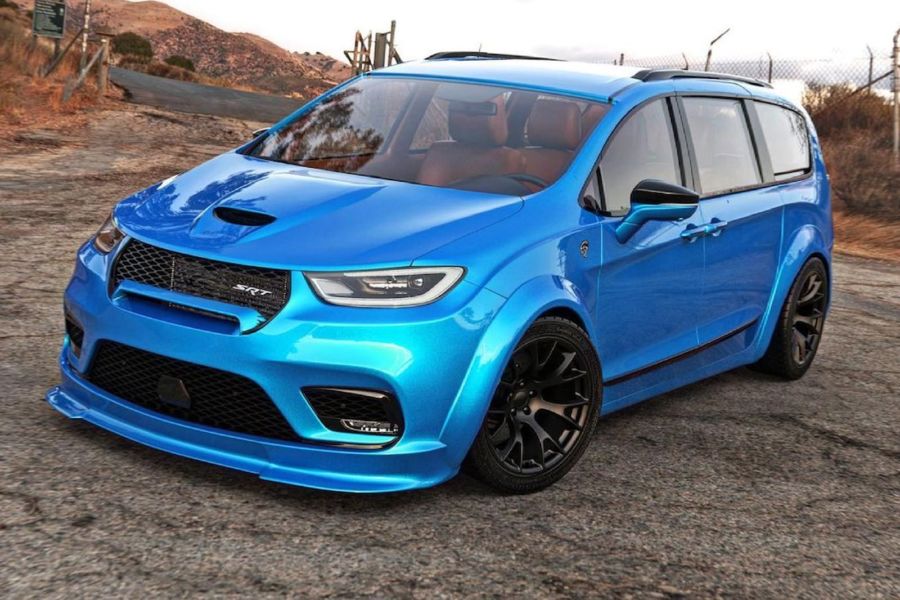 Do you know that the incredible creation of Hellcat Minivan is really happening? Chrysler Pacifica Hellcat will be a thing and you can enjoy its beauty and its swift ride. Long back it was just a design or an idea and many people made memes about it. But now it’s a real deal. The Hellcat may replace the Dodge Durango as this model is going to stop its production soon after 2024. The latter was in production for over ten years but like all the popular models its end is near. So this is the best time for Hellcat Minivan to take its place. You may find the idea of Hellcat Minivan to be too much to check out. But lots of details are available about it. Find all the details here.

The history of the Hellcat minivan

The Grumman F6F Hellcat was a single-engine fighter aircraft that was on duty during the Pacific war from 1943 to 1946. It was an important fighter plane that outmanoeuvred the Japanese A6M Zero. So the hellcat minivan got its name after this legendary aircraft. The Dodge made the Hellcat engine in secret after its launch in 2014.

The Dodge designed the Hemi V8 and its engine produced 707 Horsepower. It became one of the most iconic engines of the Dodge. The young boys took pictures of it and pasted it on their bedroom walls and it became a dream car for many. It produced a lot of power and it also matched with amazing driveability.

The making of Chrysler Pacifica hellcat

Firstly it was a concept made by Abimelec Design also known as Abimelec Arellano. He has a good amount of followers and always produces automotive concepts of cars as 3D renders and Photoshop compositions. His impressive portfolio of creations was inspiring. He provided more air to the 707hp Hellcat engine and the design was aggressive.

The Hellcat Minivan was a great challenge. One Youtube personality Tavarish accepted the challenge and according to Motor 1, the thought of creating the hellcat led to lots of excitement. But this does not inspire the Chrylser or Dodge to create a hellcat. The unofficial rending of Hellcat-powered Pacifica was made and this also did not move Chrylser or Dodge. Yet the Youtuber Tavarish took this idea as a challenge. He made his monster hellcat that took social media by storm.

He said that it was the craziest thing he ever built. So the Hellcat minivan is set to appear at the New York Auto Show which belongs to Classic Car Club Manhatten and eBay motors. Many are still waiting to know about the Hellcat Pacifica the official details regarding it will come soon.

Also read: 5 Symptoms of A Bad Thermostat And Replacement Cost

The power of Chrysler Pacifica hellcat

There are lots of speculations regarding the Chrysler Pacifica Hellcat van and many assume that it will have 700 hp and 600 lb-ft of torque. For instance, the Dodge Durango SRT Hellcat has the power of 710 hp and 640 lb-ft of torque. But it varies according to the height and size of the van. Also, the 6.2-litre Hellcat engine offers the Durango top speed of 180 mph. It will make the carpool duties fast with a minivan. Further, the Durango can also accelerate from 0 to 60 mph in just 4.4 seconds.

The regular 2022 Chrysler Pacifica has a 3.6-litre engine with 287 hp and 262 lb-ft of torque. But it can get an extra 413 ponies. The hybrid engine of the vehicle is also great as it has a range of 86 MPGe but it only offers 260 hp. Further, it is also possible that the Hellcat minivan may gain a hood scoop to permit more airflow to the supercharger. There are also extended flares to get a wider stance. You can find upgraded brakes and an exhaust system too.

Design of the Hellcat Pacifica

For the Hellcat minivan to replace the Dodge Durango, first of all, the engine has to fit. The engine bay makes it impossible to fit into the Chrysler Pacifica and technically it will be possible for savvy Pacifica owners to do it. The FCA is going to sell a crate version of Hellcat’s 6.2-litre supercharged V8 engine. Its price will be around $20,000 and it will be half the price of Chrysler Pacifica models. If you can mod the Pacifica by its engine and it is going to be the coolest minivan on the road.

The Durango was produced and sold in 2021 and it was discontinued as it did not abide by the emissions regulations. It comes with a 0-60 acceleration time of 3.5 seconds and got the name the reputed and the most potent SUV. Also, the Dodge Durango SRT was launched after many years of expectations from the people. The manufacturer threw conventions to the wind and created a monster that led to a lot of excitement. This is what we can hope for the hellcat minivan also.

How it will be to drive Hellcat Minivan?

The Chrysler Pacifica Hell Cat Minivan driving capabilities may not be like the other minivans in the world as it will be far more distinguished. The Dodge Durango SRT Hellcat increased from 0-60 mph in a supercar time of 3.5 seconds. It is very impressive and if the Hellcat engine was available in the Pacifica minivan it will produce astounding performance figures. The Hellcat minivan may also have similar performance features. At the same time, it will maintain a high level of practicability. It will be able to haul 8,700 lbs behind it.

How will be the interior of the Hellcat Minivan?

If the Hellcat minivan goes into production it will be similar to what the Durango SRT Hellcat’s interior was. It will be more aggressive and sportier than the former models. It will make the occupants of the car feel that they are something special. We can expect the designers to install an Audi esq kind of interior to offer comfort and heighten the status of the minivan.

Chrysler Pacifica hellcat minivan is going to rock as its performance is going to be awe-inspiring. Many will find it irresistible.