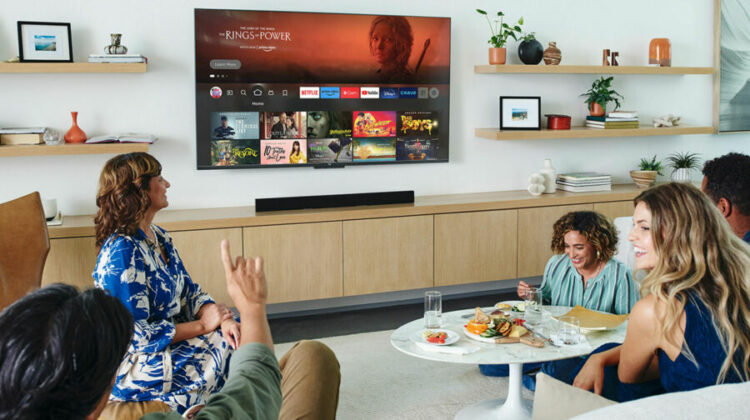 Amazon launched the Fire TV Omni QLED in September. It is a new line of Fire TV-equipped televisions. It has emphasized picture quality more than previous models. The 65- and 75-inch TVs, have quantum dot panels and full array illumination with up to 96 zones. It provides greater color performance, better contrast, and improved black levels compared to the Omni range of 2021. Additionally, there are presence sensors that enable the TV to turn off automatically.

Especially when nobody is in the room for a predetermined amount of time. It also has ambient light sensors. So that Dolby Vision IQ and HDR10 Plus Adaptive automatically adjust the brightness based on the lighting in the room. As before, there is a built-in far-field microphone for hands-free access to Alexa. Along with that Fire TV’s whole library of content is available as the television’s smart system.

With over 1,500 free works of art from galleries. A new function dubbed Ambient Experience competes with Samsung’s Frame line. Amazon’s device unveiled its new models on Wednesday. The 65-inch Fire TV Omni QLED Series costs $800. Whereas the 75-inch variant costs $1,100. Both sizes are now up for pre-order.

The television can detect someone’s presence

The new versions listen to voice instructions from Alexa in hands-free mode. Similar to the existing Omni Fire TV, they also go farther. The Omni QLED Series, according to Amazon, “transitions into the attractive and informative ambient experience when a person enters the room,” according to the company’s press release. The TV can display a variety of widgets, including calendars, reminders, sticky notes, and news headlines. In addition to operating smart home appliances like thermostats and Ring doorbells.

The system is able to comprehend the environment’s context. For instance, it will automatically turn on during the day but not at night. The TV also has a physical switch that a person can use to turn the microphones off.

There’s also a “do not disturb” function that disables the ambient experience during specific hours. It also has a menu setting to turn off presence detection entirely. The Samsung and LG TV modes, both show on-screen artwork and widgets when the TV is off. It resembles the Fire TV Omni QLED ambient experience in appearance, but with the automation of presence, sensors added. The concept of a TV that detects the presence is not new either. Sony implemented it in 2009 as a means of energy conservation, for example. However, none of these TV manufacturers have access to the same level of AI and data as Amazon Alexa.

The Omni QLED may nevertheless be convincing from an image quality standpoint. Even if someone decides to disable all “ambient” characteristics. They have a function called full local dimming. It enhances contrast and HDR by independently adjusting the brightness in various screen regions. The quantity of zones determines the gradation’s accuracy, and having more zones does not always imply higher image quality.

Also read: How to Start Investing in NFTs?