How Can You Play Farkle? Take A Quick Glance At The Farkle Rules 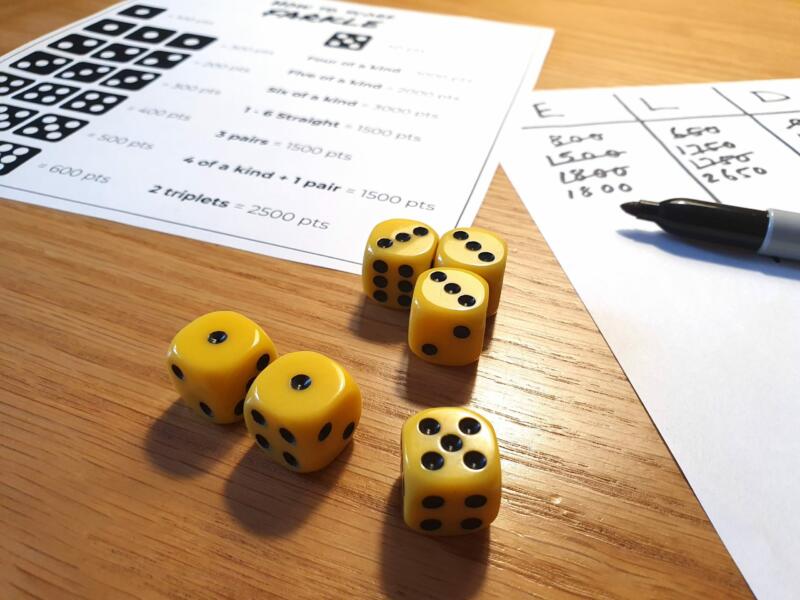 If you love playing dice games, you might have heard about Farkle. Yes, it is also a dice game that you can play with two or more players. So the Farkle rules are similar to other dice games like Hot Dice, Zonk, and Darsh. There are rumors that the game originated in the early modern period, and it was only in the early 1980s that the makers of this game marketed it commercially.

So if you are hearing about it for the first time and would like to play it, there is nothing to worry about, as the rules are pretty simple. Today, in this article, we will share some of Farkle’s interesting aspects and the significant game rules. Stay tuned to us to learn all the relevant info about the game. Let us have a quick glance!

What Is The Proper Way Of Playing Farkle?

Are you playing Farkle for the first time? Well, then, you might need to be made aware of the Farkle rules. So here we have summed up some significant details of how you should play the game. Playing these dice games also helps you to enhance your intellectual abilities and becomes a good source of entertainment. So let us now look over some of the essential aspects of the game down below:

Gather Your Players Around A Table Or Other Flat Surface

This is one of the first aspects that you need to do before playing the game. So first, determine who will roll the die at the beginning by having each player roll one die. Now the player with the highest roll gets to go first. Players will now rake turns in a clockwise direction. Pretty simple, right? Why not try it out once?

Start With The First Player’s Roll

Are you playing Farkle for the first time? Well, if you are a novice in this game, you might need to be made aware of some of the significant Farkle rules. For instance, you need to roll all six dice at the same time and remove at least one “point dice.” This means any dice worth points 1s, 5s, or three of a kind.

However, you need to know that players can set aside all point dice. But it is essential to consider some of the strategies here. For instance, in cases where a player rolls two-point dice, like 1 and 5, it can be strategic to keep one aside and place the other back with the rest of the non-point dice that you will roll. Do you know why this is important? By doing this, you may have a better chance at rolling a three-of-a-kind and thereby increasing your score in the process.

Make Sure You Know The Standard Rules Of Farkling & Hot Dice

By now, you probably know that if the player rolls and no dice appear, it is called a Farkle. Do you know what happens in these cases? Well, at this time, the player loses all the point dice he collected during that turn.

Now the turn passes over to the next player on the left. However, if the player rolls, all six dice become point dice, also known as hot dice. So now the player must roll all the dice once more before stopping and adding the collected points. However, you must remember that there is no limit to the number of “hot dice” a player may roll in one turn. So you can keep on playing.

As the heading suggests, it is as simple as that. Yes, the player can roll to collect more points or stop and keep any points acquired. So players need to consider strategies to decide whether to roll or stop. For instance, if a player throws 1,2,3,3,3,5, any results can come.

However, players need to keep in mind for any of the above cases except for the last that they risk rolling a Farkle and losing all accumulated points from that turn. All you need to do is keep these things in mind, and you will win all the games.

You need to know that it is essential to keep clear records to keep the game fair and fun. If you are playing this game for the first time, you need to know certain rules and regulations to play smoothly. So you must remember to record all points collected on the paper after each player’s turn.

Farkle rules: Play Until A Winner Is Proclaimed

Do you know that to win, a player must get 10,000 points? So after a player gets over 10,000, the other players get one turn through which it can beat the first player out of the game. Therefore, you can declare a winner based on this last roll and play again.

Establish The Changes To The Sequence Of Play

If you have gotten an idea about Farkle, you need to know about these variations of the game. Let us discuss with you all the significant aspects down below:

Farkle is one of the most popular dice games that people of all ages enjoy playing. So if you are wondering how the game is played, you can look at some of the significant Farkle rules. It will help you have a good time with your friends and family and socialize with them instead of staring at your cell phones. This article will give you a brief idea about this game’s major aspects.

Also read: A Guide on Benadryl Dosage For Dogs