How To Ensure an Efficient Mobile Game Development Process? 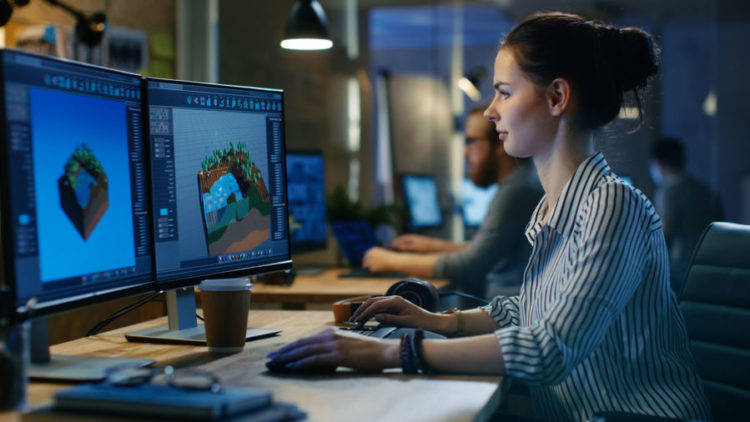 You need to actually work with a mobile game development company to see how a mobile game is developed. There are certain metrics, stages, processes, and sessions involved in building a game that you need to experience personally because reading about them would just give you an idea of how the process goes on. While experiencing the entire process in person would enable you to get hands-on experience of what needs to be done in specific stages of game development.

Furthermore, the viability of mobile games needs no explanation.

People are social beings, and they’re constantly finding new ways to connect with each other, and a game that enables them to connect with their friends, spend quality time together, and give them something to discuss is just what they need. Therefore, the success of a mobile game in terms of revenue is destined; however, the game needs to have some specific features and aspects that’ll make sure that the mobile game succeeds in the long run.

So, without any further ado – let’s get on with the mobile game development process and see what’s involved in it and how you can ensure a mobile game that brings in results.

Inspirational journeys, the most significant steps taken in history, the biggest problems that were solved, and huge leaps towards building a utopian future started with an idea. And similarly, you’re building a game; you want to earn revenue from it and not just revenue; you want to expand globally through your app so, all of this will start with an idea.

An idea will be the foundation of your mobile game, and the best part is that the idea doesn’t have to be super innovative or creative; you can start off with a simple idea and later convert it into a revolutionary one. A pro tip would be to find an innovative way of delivering a convenient experience to your customers.

Candy crush is a phenomenal blend of a puzzle and adventure game.

And just like I said earlier, it’s the experience of the game that has attracted millions of users worldwide to keep coming back to the mobile gaming app.

Characters, stories, challenges, variations, colors, impactful designs, Candy Crush has literally crushed it, and today, it is one of the best mobile games out there.

So, it’s the story that gets people to feel as if whatever they’re watching is real and not a fantasy, they feel connected to the character, and this is just what you have to do.

And that concludes the part about crafting a compelling story.

The scope or, in layman terms, ‘the concept’ of your mobile game is yet another critical factor that you need to sort out before getting started with the development and designing phase of your gaming app.

And here are a few things that you need to keep in check while scoping your gaming app idea:

1. Rules of the Game

The rules of the game or the gameplay need to be mapped out before the development of the game. You need to be clear on the rules that the player has to follow to win in the game, achieve objectives, and/or complete missions.

To power your mobile application and to provide a seamless experience to your users, you would have to leverage some technologies. These technologies can be AI, AR, VR, various gaming engines, and much more. Your gaming app developers may be able to sort this one out for you depending on your requirements.

The story arc of the game must follow the simple formula listed below:

You need to give your audience a meaningful story that perfectly blends in with the environment of the game and the gameplay. The sound of the game, looks, feel, scenes, visuals, and every related component needs to reflect the story arc respective of the different stages. And this would be yet another opportunity for you to ensure the success of your gaming app.

You need to be clear of how the users will control the player, and the best way to map this out is by focusing on the three main pillars:

Selecting the Platform for Your App

This part needs to be addressed carefully because, in most cases, appreneurs end up selecting the wrong platform for their app that results in total failure. Now, just to be clear, this doesn’t mean that the platforms are not lucrative. All of the platforms, i.e., iOS, Android, Windows, have the potential to make your app the next big hit.

However, the placement needs to be mapped out in the initial stage to ensure maximum impact.

For example, the Google Play Store at this moment has 477,877 gaming apps, and it’s implied that not all of the apps are earning, right!

In iOS’s case, there are 316,802 gaming apps. So, to stand out in such a highly competitive landscape, you need to figure out which platform will be the best choice when you’re just launching your app.

Furthermore, you can also opt for cross-platform app development and invest in an app that provides a similar high-end user experience on both iOS and Android. However, this option would be more expensive as compared to having a single-platform app in the initial launch.

Once you’re completely done with the front-end of the app, you’ll now focus on the back-end of the app, and this is particularly where the engine of the game will come into handy. Although there are tons of mobile gaming engines that you can choose from, it’s necessary for you to select the gaming engine that is specifically designed according to your game’s requirements.

For instance, Unity 3D engine is designed to empower 3D games, Cry engine is for the games that visually excel, and build box is designed to aid the drag and drop feature in the game. Similarly, the gaming engines come with languages that you’ll be following to code your gaming app.

You may encounter back-end languages like C#, Python, Laravel, Node.js, and C++ during this phase.

In short, you’ll be planning out the infrastructure of your gaming app, so make sure you consider the most appropriate back-end technologies to power your app.

Last but not least, if you’re working with a game development company, they may work on this phase for you and streamline all the languages and technologies required for your app development.

This document is necessary to create because, first of all, it would keep a record of whatever you’ve decided to integrate into your gaming app, and second of all, it would make sure that your app follows a stick code to get built and launched.

The wireframe is like a precise outline of your gaming app. It provides a clear view of what the initial developmental stage will look like, followed by sprint sessions, designing phase, and when a fully functional prototype is ready.

And this is not the only advantage of a wireframe. If you’re about to tap into the world of mobile games, you may already know that this domain is super expensive and can cost you a lot. Therefore, sticking to a wireframe to have a quick overview of the cost of game development is necessary as it would tell you in which stage you’ll be needing higher or lower investment.

Once you’ve got everything figured out, it’s time to get started on the development and designing of your mobile game. For the development part, all the technologies, functionalities, features, navigation, experience, and more will come together to form a robust back-end of the application.

Once the entire game has been developed, you’ll be focusing on the design of the gaming app. During the designing phase, you’ll be creating an experience that redefines the conventional experience. Therefore, your creativity will come in handy here.

Also, in this stage, several tools and technologies will be leveraged here so, you may see a lot of iterations and integrations during this stage.

The next stop is here, which is quality assurance.

It’s seriously not recommended to just develop a game and launch it straight away. I mean, yes, getting your app to the market quickly is important, let alone completing the entire development and designing on time.

However, if in case the app doesn’t go through the testing and fixing or quality assurance stage; it may be uploaded to the store with bugs or errors that would scare the users away. Hence, the plan that you had of earning millions through your gaming app would fall, just like that.

Therefore, the Q/A phase should be planned accordingly, and the alpha and beta phase combined with the Q/A testing stage should be considered of vital importance. Through this way, by the end of the game development process, you’ll have a bug, lag, and error-free app that would receive feedback from the users and not uninstalls.

It all boils down to the monetization strategy that you’ve got to follow to earn millions. In this stage, you’ll decide the source of income for your gaming app.

For example, you’ve got to figure out if you’ll go for the monthly subscription model, in-app purchasing, sponsored ads, and other trending monetization strategies that’ll help you with your revenue goals.

Developing a mobile game is not a simple task.

It requires extensive planning, mapping, streamlining, and much more just to get started, and in between the process, you may encounter several concerns and issues that you may have to address.

However, still, you’re putting a ton of money, effort, and time into developing a mobile gaming app, right?

You may also read: 5 Best Gaming Desk for PC and Console Gaming