How To Grow And Care Mountain Laurel? 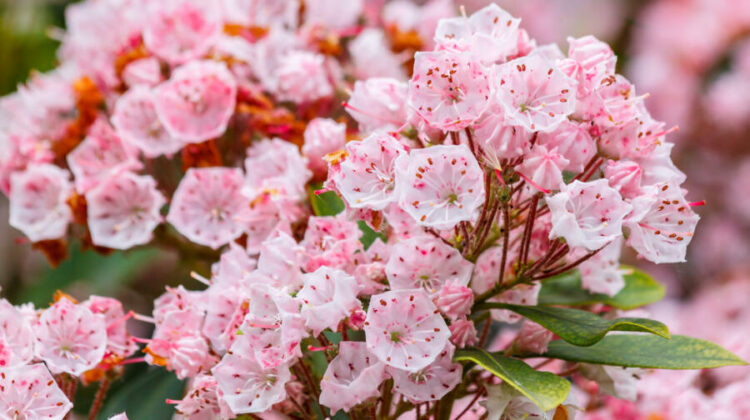 Beautiful mountain laurel shrubs can occasionally reach heights that allow them to be trained into tiny trees. It primarily grows in cold, damp soil in the eastern region of the United States.

In general, the plant doesn’t require a lot of water. It is beneficial to reside in regions with typically wet soil, and these areas must be somewhat shaded.

Mountain Laurel produces clusters of five-sided, cup-shaped flowers as its blooms. The hues, which can be two-toned and vary from white to blush to crimson, can have intriguing marks all over the bloom.

If a portion of your yard is close to a water feature, such as a stream, you should have this plant if you have a shaded area where morning condensation or rain doesn’t dry off as soon.

How Can a Mountain Laurel Be Grown?

Mountain laurel does well in full sun and moderate shade, although it looks best in dappled sunshine. Southern, hot areas benefit most from partial shade.

Avoid areas with direct sunlight and light bouncing off buildings to the south or west that radiate heat. Flowers lose their vibrant hues and may develop leaf spots in regions of intense shadow.

Mountain laurels will flourish in an environment where azaleas and rhododendrons can grow. The plants require acidic, wet soil that drains well.

Clay soil won’t support their growth correctly. Avoid planting the bushes in or near lawns fertilized with high-nitrogen products since you want to give them only a little fertilizer.

Compost should add to the soil before mountain laurels are planted. If the bushes are numerous, make changes to the whole bed. Add the compost to the filled earth if producing one or two brushes.

Dig the hole three times as broad to ensure that the shrub has plenty of organic soil where it can grow its roots. As deep as the root ball, adding organic matter to the filled earth.

Mountain laurel requires more frequent irrigation than other bushes since its root system is shallow. New crops require 2 inches of water every week for the first season.

You must operate the sprinkler system for two hours since the average sprinkler system releases an inch of water each hour. To assist the soil in retaining moisture in between waterings, use organic mulch, such as pine needles or shredded bark.

What Level of Poison is Mountain Laurel?

With its lovely blooms and fragrant perfume, this shrub draws kids in. Children frequently sip on the nectar’s delicious juice, which can cause nausea, stomach cramps, and a runny nose. It is advised to keep mountain laurel plants away from children and animals because every component of the plant contains poison.

If animals consume the leaves of the mountain laurel, it can cause them to get very unwell and potentially cause them to die. The leaves are just as poisonous as the blooms.

When these leaves are consumed by animals like goats, horses, or sheep, it might result in convulsions, respiratory problems, and drooling. Most gardeners take precautions when working with this plant, and poisoning is quite rare.

The consumption of honey create by bees who eat the nectar of their flowers produces a slight sickness. Because of the andromeda toxins found in these plants, blood pressure is dramatically reduced.

Drowsiness and even convulsions result from this. In extremely extreme situations, it is also seen that a form of paralysis occurs before death. However, if a person already has health problems, consumption might also cause sudden demise.

This lovely plant comes in a variety of forms. We have divided them into the following groups based on their various qualities.

Alpine lily Texas bushes stand out from eastern mountain laurels in size, form, and bloom color. 15 to 25 feet is the maximum height of the Texas mountain laurel. These evergreen bushes have around 5-inch-long glossy green leaves.

Their bright blue to purple blooms appear in the early spring in the Southwest zones. These bushes may be cultivated from Texas mountain laurel seeds, which are widely obtained.

The first dwarf mountain laurel cultivar was called “Elf.” They have long, thin, evergreen leaves, and this shrub is frequently cultivated in groups to resemble a semi-shaded forest garden. Large pink buds that reveal white flowers are usually present as it starts to bloom in May.

Because of its lovely blossoms, the snowdrift mountain laurel is a popular natural plant in the east. The leaves are generally 5 inches long, oval, and dark green. They produce enormous white clusters that resemble cups and bloom from May through June.

Because the underlying bedrock is deficient in cations like calcium and phosphorus, the soils are also frequently poor in nutrients. Our two southern research locations have an exceptionally high concentration of mountain laurel.

The State Flower of Pennsylvania is the mountain laurel. And anyone who has attempted to traverse one of its stands will attest. It is quicker to walk half a mile around it than a tenth of a mile through everything.

Also read: What Do You Know About Pink Princess Philodendron